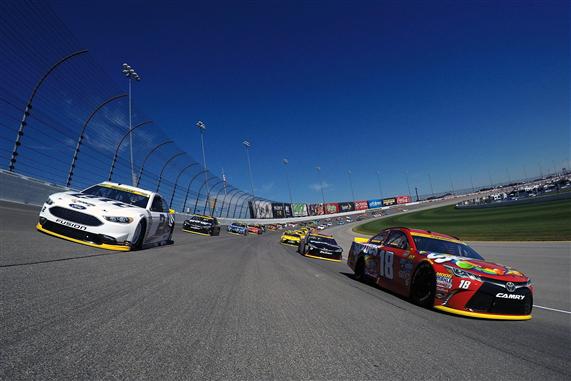 The Monster Energy NASCAR Cup Series will compete at Chicagoland Speedway this week for the Overton’s 400. This will be the sixth race this season on a 1.5-mile track so we should have a good idea which drivers will be the best for our team this week. The race can be seen Sunday at 2 p.m. ET on NBC Sports Network.

The MENCS will have another unique schedule this week. There is no on track activity for the MENCS Friday. There will be two practices Saturday, followed by qualifying Saturday evening. Our Driver Group Game rosters must be set by 8am ET Saturday.

The last race at had four dominators. That is rare on a 1.5-mile track. Usually we have two main dominators on the intermediate tracks. Kyle Busch won the pole and led the most laps (85). Kevin Harvick took the lead from Busch at the beginning of Stage 2. Harvick led 59 laps and finished 3rd. Busch multiple penalties in the pits and finished 15th. Chase Elliott beat Harvick off pit road and led 42 laps. Elliott won Stage 2 and finished 2nd. Martin Truex Jr. overcame a penalty and ran down Harvick with 77 laps to go in the race. Truex led the last 77 laps and won his second consecutive race at Chicagoland Speedway.

The race at Chicago was moved from September to July this season. One of the reasons for the change was because NASCAR felt the track was “lacking character.” It is a pretty easy track for the top teams to navigate. Ryan Newman said, “I consider Chicago to be much like Michigan. The surface is smooth and a lot of fun to race on. To win at this track you need a good car with consistent balance. If you are off when you unload it is really hard to get the speed back.” Usually the drivers who perform well in practice are the ones dominating the race at Chicago.

There are only 267 laps the race this week. That means there will be 133.5 points available for fastest laps and 66.75 points available for laps led. The trend at Chicago is to have one driver score 60 fastest laps, another to score 40 and two drivers score 20. The rest of the fastest laps are usually spread out between 18 drivers. The trend for laps led is to have 3 drivers lead over 40 laps with the main dominator leading 90+ laps. It will be very important to have at least two dominators in your lineup this week.

The drivers I expect to be the top dominators this week are: Kevin Harvick, Kyle Busch and Martin Truex Jr.

The drivers who could be the top value picks for the race Sunday include: Denny Hamlin, Chase Elliott, Kurt Busch, Erik Jones, Alex Bowman and Paul Menard

The drivers I expect to be the best cheap drivers for the race Sunday include: Kasey Kahne, *AJ Allmendinger, David Ragan and Trevor Bayne

* Be sure to check out my important information about AJ Allmendinger this week in the Garage Talk Notes.

My Fantasy Live picks took a hit last week after AJ Allmendinger and Jamie McMurray decided to blow up their cars on the same lap. I really wish I had a two car garage because I surely needed it last week. My picks fell from 63rd overall to 105th. I plan on getting back inside the top 100 this week and working my way inside the top 50 in the final 10 races of the season.

Kevin Harvick (3): Harvick is a threat to win every week and he is my pick to visit Victory Lane Sunday. Harvick has won 3 of the 5 races on the 1.5-mile tracks this season and led a series-high 561 laps. The No. 4 car has also qualified in the top 3 in 3 of the 5 intermediate track races. Harvick should qualify up front, lead the most laps and win the race this week. I also expect the No. 4 car to score a lot of Stage points this week.

Kyle Busch (3): Busch had the best car at Chicago last year. Busch won the pole, led the most laps and had 2 huge penalties in the pits that cost him a lot of track position. Busch went to the back twice and raced his way to the front. Busch has won 2 races on the 1.5-mile tracks this season (Texas and Charlotte) and in the last race he led 377 of the 400 laps. That is domination! I expect Busch to win the pole, lead most of the laps in Stage 1 and finish in the top 3 Saturday night.

Martin Truex Jr. (3): Truex is starting to get his 2017 MoJo back and that is scary for the rest of the field. He is actually doing better than he did last year when you compare wins at this stage of the season. Truex won the last two races at Chicago and he should have a good chance to three-peat this week. I have been saving my allocations with the “Big Three” for the 1.5-mile tracks so I will have Harvick, Busch and Truex ready to rock and roll Sunday.

Clint Bowyer (5): To say Bowyer is having a career year is an understatement. His second season at Stewart-Haas Racing has been a huge success. The No. 14 team is starting to find their groove after a win at Michigan and a 3rd-place finish at Sonoma. Ryan Newman said this track races like Michigan and if that is the case, Bowyer should be one of the best picks for your team. His stats at Chicago are nothing to write home about, but he has never had a car as fast as what he will have this weekend.

Chase Elliott (5): Hendrick Motorsports is starting to find more speed in their cars. Some of their success came when they switched to a new engine before the race at Charlotte. Elliott finished in the top 12 in the last 3 races on the 1.5-mile tracks. Chicago ranks as his best track so you would think he could finish in the top 10 and maybe the top 5 this week. In his two races at Chicago, Elliott has finished 2nd and 3rd. I really hope I can use an allocation with the No. 9 car this week.

I plan to have Denny Hamlin (4) in the garage this week. The No. 11 car has had a lot of speed on the 1.5-mile tracks. Hamlin continues to make mistakes on pit road and that hurts his value. He has an average finishing position of 3.7 in the last 3 races at Chicago. Hamlin should be a good insurance policy to have in the garage this week.

I cannot catch a break in the Fantrax Bronze Point Salary Cap game. I really thought playing Kyle Larson from the pole and adding AJ Allmendinger to the team would pay off at Sonoma. Wow, did that ever backfire. Luckily we are not even half-way through the season so there is still time to make up some ground on the competition.