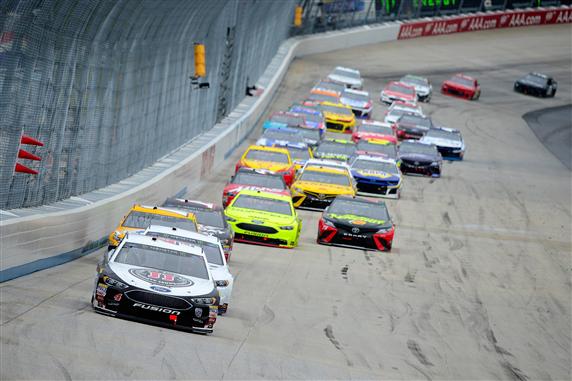 The first round of the MENCS Playoffs is complete and now we are down to 12 drivers competing for the championship. If you think the first three playoff races were crazy, you have not seen anything yet. Teams will do everything they can to finish up front at the Monster Mile this week. No one wants to be in a hole heading to Talladega. The Gander Outdoors 400 at Dover can be seen Sunday at 2pm ET on NBC Sports Network.

The MENCS will have a normal schedule this week. There will be one practice Friday (12pm ET on NBCSN) and two practices Saturday (11am ET on CNBC and 1:30pm ET on NBCSN). Qualifying will be Friday afternoon at 3:30pm ET on NBC Sports App (Yes there is no TV for this and that just sucks!).

The MENCS last competed at Dover in May. Kyle Larson won the pole but had to start in the back because his car failed inspection. The race was dominated by Brad Keselowski and Kevin Harvick. Keselowski qualified 8th, had a 3.2 average running position, led 108 laps and finished 6th. Harvick qualified 2nd, won both Stages and led 201 laps on his way to Victory Lane. It was his 2nd career win at the Monster Mile. Stewart-Haas Racing had 3 cars in the top 5 and all 4 cars in the top 11.

Now it is about to get interesting. It will be important to focus on the 12 drivers who are still competing for the MENCS Championship. Team Penske announced they built brand new cars for the rest of the playoff races (Except Talladega). Greg Zipadelli told PRN Radio that the 4 Stewart-Haas Racing cars will work together in the next 2 rounds. He said each team will test different setups in practice and the organization will determine which is the best for the race. Having 4 cars in the final 12 should be an advantage for them. Now that Jimmie Johnson is eliminated, I expect the No. 48 car to test different setups for Chase Elliott and Alex Bowman to work with in the race. Joe Gibbs Racing only has one driver left (Kyle Busch) so the No. 11, No. 20 and No. 19 cars will all be working to help Busch get to the final 4.

The race Sunday will come down to having the right dominators in your lineup. There are 400 laps in the race at Dover. That means there are 100 bonus points for leading laps and 200 points available for fastest laps. The trend in the last 5 races at the Monster Mile is to have one driver lead 175 laps, another to lead 105 and two other drivers to lead roughly 40 laps each. These drivers also score the majority of fastest laps because clean air produces fast laps at this track. These bonus points add up quickly so we must have at least 2 dominators in our lineup Sunday.

The drivers I expect to be the top dominators this week include: Kevin Harvick, Martin Truex Jr., Kyle Larson, Brad Keselowski  and Kyle Busch

The drivers who could be the top value picks (between $9k – $7K) for the race Sunday include: Kurt Busch, Joey Logano, Aric Alomirola, Jimmie Johnson and Matt Kenseth

The drivers I expect to be the best cheap drivers (below $7K) for the race Sunday include: William Byron, Chris Buescher and Ricky Stenhouse Jr.

I needed a good race in Fantasy Live last week and I got it. Fading the “Big 3” (Kyle Busch, Kevin Harvick and Martin Truex Jr.) was the right strategy. They were the highest owned drivers in the field. Kurt Busch and Chase Elliott were able to outscore all of them. Jamie McMurray and AJ Allmendinger were the high scoring non-Playoff Drivers so the lineup paid off. My picks are now in the top 94.2% with 7 races left. We need to continue to be create so we can pass more people in our league standings.

People who do not do research or do not follow this page will most likely select Martin Truex Jr., Kevin Harvick, with Kyle Busch in the Garage this week. I am not so sure it is that easy. We need to continue to pass our competitors in our league standings and we cannot do it with the same drivers they have on their team. There are a lot of good choices this week. I think we can find some value that will pay off once again.

Chase Elliott has the best average finishing position of any driver over the last 10 races. Now he competes at his best track. Elliott has run 5 races at the Monster Mile and his average finishing position is 5th. Elliott qualified 12th, led a race-high 138 laps and finished 2nd in this race last year. He ranks 3rd on the steep tracks this season so Elliott will be a very good contrarian pick.

My second Playoff Driver will come down to Brad Keselowski or Kyle Larson. Both of these drivers will be very good picks this week. Keselowski finished 2nd and 3rd in the two Stages and led 108 laps in the first race at Dover. Keselowski will have a brand new car which was built specifically for this track. Keselowski has been one of the best drivers over the last month and he should continue to run up front Sunday.

I will consider Kyle Larson for the 2nd Playoff Driver spot if he looks fast in practice and qualifies up front this weekend. Larson won the pole for the last race at Dover but had to start in the back because his car failed inspection. No driver in the field has led more laps at the Monster Mile in the last 5 races than Larson. He has led 378 laps in the last 3 races at Dover. He said after the race at Charlotte, “I feel like I was given a 2nd chance because I thought I was eliminated. I know now I should never give up. I will race as hard as I can on every lap in the final races of the season.” I expect Larson to run up front Sunday afternoon.

My two Non-Playoff Drivers are likely to be two drivers will likely Jimmie Johnson and Denny Hamlin. This is by far the best track for Johnson. He has 11 wins at the Monster Mile. His average finishing position at Dover since 2013 is 9.6. If you take away his engine failure in 2015 his average finishing position would be 4.8 in the last 9 races at the track. Johnson finished 9th in the first race at Dover and he should finish in the top 10 again Sunday.

Denny Hamlin has been pretty good at Dover. He has finished 4 of his last 5 races at the track in the top 10. The only race he failed to finish in the top 10 was last year when his rear axle broke. Hamlin finished 7th in the first race at Dover. He should be the best non-Playoff Driver this week.

Jimmie Johnson and Denny Hamlin are the best choices on paper but does anyone really trust these two drivers? I like their chances of finishing up front but I am worried about them making a mistake in the race. I plan to have Erik Jones in the Garage this week as an insurance policy. Jones ran well in the first race at Dover but he ran out of gas on the last lap. I expect the No. 20 car to run in the top 10 this week.

Last week I traded for AJ Allmeninger and he finished in the top 10. It took me a while to figure out how to make a trade and I accidently made two trades in order to get Allmendinger on my team. I am now out of trades because of the error and that is frustrating. I still think I can use Allmendinger at Talladega and Martinsville so my picks will be fine.