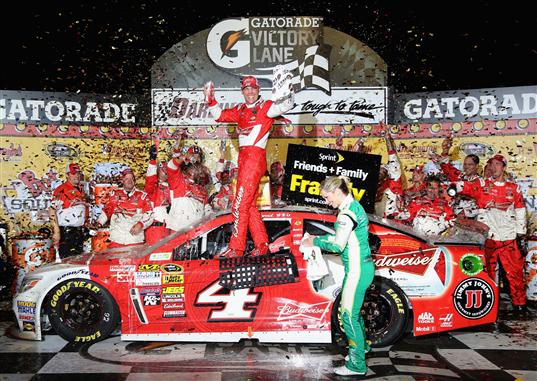 The Monster Energy NASCAR Cup Series competes at Homestead-Miami Speedway this week for the Ford EcoBoost 400. The race can be seen Sunday at 2:30pm ET on NBC.

The first season of Fantasy Racing Tips was a huge success and I cannot wait to make it even better in 2018. I hope you enjoyed the content I posted this year. I have big plans to make it better in 2018. Thank you for giving me a chance in my first season. I hope I was able to put your fantasy team in a position where you will be able to brag to your competitors during the offseason. Once again, THANK YOU!

The last race of the season is finally here. This should be one of the best championship races ever. The four drivers (Martin Truex Jr., Kevin Harvick, Kyle Busch and Brad Keselowski) have combined to win 17 races, scored 59 top-five finishes and led 5,782 laps. These three drivers have dominated the sport in 2017 and it will be fun watching them compete for the first Monster Energy Cup.

The MENCS held a tire test at Homestead-Miami Speedway on October 25th and 26th. Each organization was allowed to have one driver at the test. The eight drivers who participated included: Martin Truex Jr., Brad Keselowski, Kyle Larson, Denny Hamlin, Jimmie Johnson, Clint Bowyer, Ryan Blaney and Trevor Bayne.

The No. 42 car was the fastest in both sessions on the first day while Denny Hamlin had the fastest speed (174.036) on the second day of testing. Hamlin was followed by 2) Brad Keselowski, 3) Clint Bowyer, 4) Martin Truex Jr. and 5). Kyle Larson.

These eight drivers should have a leg up on the competition when the cars are rolled off the haulers Friday.

This week I used past performance at Homested, average running positions on 1.5-mile tracks, driver ratings on 1.5-mile tracks, current momentum and driver rating in the playoffs to determine the best drivers for the race Sunday. I also weighted the four drivers who will be competing for the championship a little more this week since they will get plenty of room on the track Sunday. Here are the top 15 drivers in my model…

Kevin Harvick was my pick to win the 2017 MENCS Championship in my Preseason Driver Rankings article and I am not changing my pick now. Harvick has been awesome on the 1.5-mile tracks since the playoffs began. He led 59 laps and finished 3rd at Chicago, led a series-high 149 laps and finished 3rd at Charlotte, led 37 laps and finished 8th at Kansas and he led 38 laps and won at Texas. The way the No. 4 car ran down Martin Truex Jr. at Texas was incredible. No one has been close to catching the No. 78 car this season. Harvick said he has his “game face on now and will not let anything get in his way of the championship.” When everything is on the line, I want my money to be on the No. 4 car.

Martin Truex Jr. should be the favorite to win Sunday. He has dominated the 1.5-mile tracks like we have not seen before. Truex has won 6 times on the intermediate tracks, including 3 of the 4 (Chicago, Charlotte and Kansas) in the playoffs. Truex would be my pick to win if this race was held at any other 1.5-mile track. Homestead is the second worst track for the No. 78 team. Truex has not finished in the top 10 at Homestead since 2013. The team said they feel really confident after the test at the track in late October. I would not worry too much about past performance. Truex will be up front Sunday.

Kyle Busch in a winner takes all scenario? It will be hard to bet against the No. 18 car this week. Busch knows he can win in this format because he did it in 2015. Busch has not won on a 1.5-mile track this season but he has won 2 poles (Kentucky and Chicago) and he has led 466 laps at these tracks in 2017. Busch is my pick to qualify on the front row and lead some of the early laps in the race. It will be tough for him to hold off the No. 4 and No. 78 cars Sunday. I like Busch for a top-five finish.

Brad Keselowski is definitely the underdog this week. He has been complaining since the summer that the Toyotas have a “huge” speed advantage on the 1.5-mile tracks. It is true that Team Penske is behind on speed but Kevin Harvick (Ford) and Kyle Larson (Chevy) have been able to keep up with the Toyotas so his argument does not hold up. I still would not count out the No. 2 team this week. They have a habit of pulling a rabbit out of the hat to win races. They will need a late caution to gain track position Sunday. The good news is the trend at Homestead is for many cautions at the end of the race. Keselowski should find a way to get into the top 5 this week.

Kyle Larson is really hard to count on right now. He has four DNFs in a row. He is on my list because he is the best driver in the field at turning fast laps at Homestead. The fastest way around the track is to run the top. No one does it better then Larson. He led 132 and finished 2nd in this race last year. I doubt this team will completely give up since they know they can win this race. I expect Larson to roll off the truck with the most speed Friday, qualify up front and lead many laps in the race.

Chase Elliott came so close to making it into the final four. He would have had a good chance to win the championship if he could have won the race at Phoenix. Elliott has been one of the most consistent drivers in the playoffs. He finished 2nd at Chicago, Dover, Charlotte and Phoenix. He also finished 4th at Kansas. He will have plenty of time to win multiple championships in his career. It will be fun to see what happens when the No. 24 and No. 11 cars find each other on the racetrack Sunday. You know the NASCAR Gods will make them qualify right next to each other. That is how it always works out.

Ryan Blaney has been one of the best drivers at qualifying up front on the 1.5-mile tracks and he has been pretty good at finishing in the top 10 as well. Blaney finished 11th at Chicago, 8th at Charlotte, 3rd at Kansas and 6th at Texas. I really thought he had a shot at making the final four when he won the pole at Phoenix. Blaney was one of the fastest drivers in the test session at Homestead. He should qualify in the top four and finish in the top 10 this week.

Matt Kenseth added his name to the list of drivers who were able to win a race before their career was over. It was cool to see Jeff Gordon and Tony Stewart win a race in their final season but this one was even more special for Kenseth. Unlike the other two drivers, Kenseth still wants to race. He wanted to prove to the owners that he can still win in the MENCS. He did that last week and I am sure it will give him some motivation to run well Sunday.

Erik Jones is still looking for his first win in the MENCS. He has had plenty of opportunities to get the job done. This is his final race to get to Victory Lane before his rookie season is complete. Jones has been hit or miss on the 1.5-mile tracks this season. Motivation is important in this race because most of the field does not have much to race for. Jones said he would love to get the No. 77 car to Victory Lane before the team is shuts down. I am sure he will be motivated to run up front this week.

Jamie McMurray does not get a lot of attention in the MENCS but he is a having one of his best seasons. McMurray has been the 8th best driver on the 1.5-mile tracks this season. He is also the 8th-best driver at Homestead. McMurray finished 5th in this race last year and it would not surprise me if he finished in the top five again Sunday.