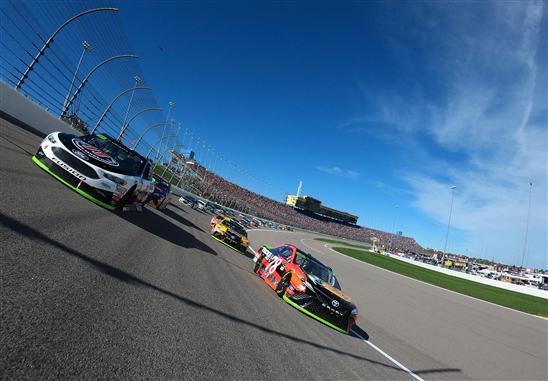 The Monster Energy NASCAR Cup Series will travel to Kansas Speedway this week for the KC Masterpiece 400. This will be the second night race of the season. Teams will have two practices Friday and then qualifying Friday evening. The KC Masterpiece 400 can be seen Saturday night at 8 pm ET on Fox Sports 1.

The race at Kansas last year was dominated by four drivers: Martin Truex Jr. (led 104 laps and finished 1st), Ryan Blaney (Won the pole, led 83 laps and finished 4th), Kyle Busch (led 59 laps and finished 5th) and Kevin Harvick (led 10 laps and finished 3rd). The story of the race was the wreck on lap 200 between Aric Almirola, Danica Patrick and Joey Logano. Almirola broke bones in his back and missed many races. Truex won the race and many more on the 1.5-mile tracks in the 2017 season.

Kansas Speedway is one of the more difficult of the 1.5-mile tracks. It was repaved in 2012 and that made the track lightning fast. Many drivers said after the October race that the track was finally starting to age and develop more grooves for the drivers to race on. The wind at Kansas can also be tricky. Sometimes the wind blows over turns 3 and 4 at the start of the race and changes to turns 1 and 2 by the end of the race. Crew Chiefs have a difficult time keeping up with the race track. Make sure you select the drivers with the best history at Kansas for your fantasy teams this week.

Kansas is not too hard of a track to predict. The drivers at the top of the standings are very likely to dominate this race. There are 267 laps in the race and 133.5 points available for fastest laps and 66.75 points available for leading laps. The trend at Kansas is to have one driver lead around 115 laps, another driver lead 80 laps, and another driver lead 40 laps. The final 37 laps are spread out between 3 to 4 drivers. The three drivers who lead the most laps are the drivers who score the most fastest laps in the race. So it will be very important to find at least two of these dominators for our lineups this week.

The drivers I expect to be the top dominators this week are: Kevin Harvick, Martin Truex Jr., Kyle Busch and Ryan Blaney

The drivers who could be the top value picks for the race Saturday night include: Kurt Busch, Clint Bowyer, Aric Almirola, Matt Kenseth and Ricky Stenhouse Jr.

The drivers I expect to be the best cheap drivers for the race Saturday night include: Daniel Suarez, William Byron, Kasey Kahne, Chris Buescher and AJ Allmendinger

My Fantasy Live picks just keep rolling along. My picks are now ranked 103rd overall and beating 99.99% of the entries. My goal is to finish inside the top 100 for my 3rd consecutive season. I will not to use my allocations wisely if that is going to happen.

*** My final picks for Fantasy Live will be posted after qualifying Friday night. I will also post picks for the new NASCAR America Fantasy Live game.

Martin Truex Jr. (6) has been the best driver at Kansas in the past four races at the track. He won both races at Kansas last year, led 195 laps and won 3 of the 4 stages. The No. 78 car has been very good on the 1.5-mile tracks but has had some bad luck which prevented him from winning the races. I expect his luck to turn around this week. The No. 78 is so good at this track that they should name Victory Lane after him.

Kevin Harvick (4) should be the best pick for the race at Kansas. Harvick has two wins at Kansas (2013 and 2016) and 4 wins this season. Stewart-Haas Racing has the cars to beat and Harvick is their best driver. His average finishing position in the last 5 races at the 1.5-mile tracks is 1.8 (Includes wins at Texas, Atlanta and Las Vegas). Harvick is also a good pick for the bonus points for winning the pole. Harvick has 3 poles at Kansas. I plan to keep using Harvick until he cools off.

Kurt Busch (6) has been very good at Kansas in his career. His average finishing position in the last 6 races at Kansas is 8.5, include a 2nd-place finish last October. Busch has also led laps at Kansas in 2 of his last 3 races at the track. Busch has run very well on the 1.5-mile tracks this season. He finished 8th at Atlanta (led 52 laps) and 7th at Texas (led 40 laps). Busch is a great pick for your team this week.

Clint Bowyer (8) has never run this well in his career. It is no secret that winning a race at his home track in Kansas is very high on his to do list. I am sure Tony Stewart will provide Bowyer one of their best cars this week so he can add a win at Kansas to his resume. Bowyer finished 3rd at Atlanta and 9th at Texas. I expect him to run in the top 10 again Saturday night.

Ryan Blaney (7) should be in every lineup this week. This is the best track for Blaney. He finished 3rd and 4th in the two races at Kansas Last year. He also won the pole and led 83 laps in this race in 2017. Blaney has been pretty good on the 1.5-mile tracks this season. He is coming off back-to-back top-5 finishes at Las Vegas and Texas. I expect Blaney to qualify up front, lead some laps and finish in the top 5 Saturday night.

I plan to have Brad Keselowski (7) in the garage this week. I will also be watching Matt Kenseth in practice to see what he can do in his Roush Fenway Ford. Keselowski is the safer pick. He has one win at Kansas and a handful of top-five finishes, including a 2nd-place finish in this race last year. Keselowski has also led laps in 8 of the last 9 races at Kansas. He should be up front a lot Saturday night.

* I would love to use Kyle Busch but I only have 4 allocations with him. I need to save Busch for some of the 1.5 tracks (Charlotte, Kentucky and Chicago) later this season.

My Fantrax Bronze Point Salary Cap picks were running well until Kyle Busch had drive train problems with his car. This really hurt my team but the good news is that 6 of the 10 teams in my league are using my picks each week so their teams suffered too. I guess my picks are popular.