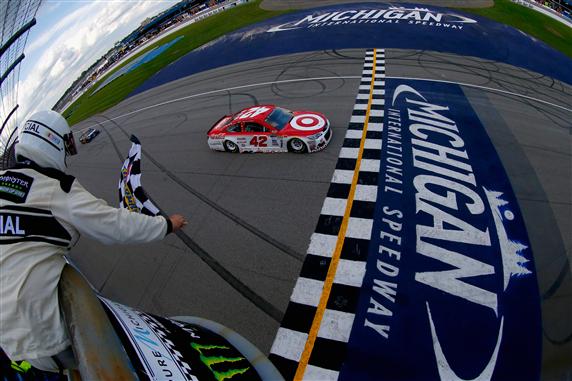 The Monster Energy NASCAR Cup Series will return to the Irish Hills of Michigan this week for the Consumers Energy 400. The racing at Michigan is fun to watch. There are multiple grooves and the track is one of the fastest on the circuit. The race can be seen Sunday at 2:30 p.m. ET on NBC Sports Network.

The last race at Michigan was dominated by Stewart-Haas Racing. Kurt Busch won the pole and led 46 laps. Kevin Harvick took the lead with 12 laps left in Stage 2 and he dominated most of the race. Harvick led a race-high 49 laps. The No. 4 car was not able to hold off Clint Bowyer when the rain started to fall. Bowyer led the final 8 laps on his way to a very wet Victory Lane. Stewart-Haas Racing finished #1 (Clint Bowyer), #2 (Kevin Harvick) and #3 (Kurt Busch). Kyle Larson ran well but blew a tire while running 8th. Kyle Busch started last for failing inspection and finished 4th. Martin Truex Jr. had his worst race of the season. The No. 78 qualified 17th and finished 18th.

We usually see a shift in power in NASCAR after the first race at Charlotte. It is starting a lot later this season. Chevy is using a new engine and made some changes to the chassis that gained them some speed in the recent races. Dale Jarrett talked about it on NBC NASCAR America. You can read about his thoughts here: Hendrick Motorsports New Equipment. I expect the gap between Toyota, Ford and Chevy to close even more as we approach the NASCAR playoffs. This will give us some more options for our Fantasy NASCAR teams.

My DraftKings picks are starting to catch fire like they did at this time last year. Playing the combo of Kyle Busch and Chase Elliott work out well last week. My model is usually pretty accurate at Michigan so be sure to check out the predicted points for each driver in the DraftKings article Saturday night.

There are 200 laps in the race this week. That means there are 50 points available for leading laps and 100 points available for fastest laps. The trend at Michigan is have one driver lead 100 laps, another driver lead 50, a third dominator lead 25 laps and the final 25 laps being spread between 5 drivers in the field. The three drivers who lead the most laps usually score most of the fastest laps as well because running up front in clean air produces the fastest laps. I will be important to try and find the two drivers who will lead the most laps this week. They will likely score 80 bonus points in your DraftKings contest.

The drivers I expect to be the top dominators this week are: Kevin Harvick, Kyle Larson, Kyle Busch, Kurt Busch and Martin Truex Jr.

The drivers who could be the top value picks (between $9k – $7K) for the race Sunday include: Clint Bwyer, Chase Elliott, Ryan Blaney, Erik Jones and Jamie McMurray

The drivers I expect to be the best cheap drivers (below $7K) for the race Sunday include: William Byron, Alex Bowman and Chris Buescher

My Fantasy Live picks actually climbed back inside the top 100 after the race at Watkins Glen. We are barely in the top 100 (99th overall), but I will take it. We only have 4 races left in the Fantasy Live game. I am running out of time to get back inside the top 50, but even a top 100 finish out of nearly 400,000 entries is not too bad. I will do the best I can and see how high up in the standings we can get before the end of the season.

**Garage Driver:  I have been doing my best to keep everyone informed by using my Twitter account @MrFantasyNASCAR. I will do it again this week so make sure you follow me and get all of the information about the cars as I scan the drivers throughout the race.

There are 4 races left in the Fantasy Live regular season. There is no need to save allocations any more. If a driver qualifies up front and looks fast in practice, use him in your lineup. I will use any of the “Big Three” (Kyle Busch, Kevin Harvick or Martin Truex Jr.) if they look fast in practice Saturday. I am down to 2 allocations with Kyle Busch and 1 with Kevin Harvick and Martin Truex Jr. The only one I plan to play right now is Harvick but that could change this weekend.

Kevin Harvick (1): Harvick had the most dominant car in the last race at Michigan. He qualified 4th, had a 2.43 average running position, led the most laps (49) and finished 2nd. It was the 4th time Harvick finished 2nd at Michigan while driving for Stewart-Haas Racing. I wanted one of the “Big Three” on my team this week and Harvick is the best choice. He should be a threat to win the pole, lead the most laps and finish in the top 3 Sunday.

Kyle Larson (3): Larson has won 3 of the last 4 races at Michigan. He has also led more laps than any other driver over the last 3 seasons. He did not have the best race in June at Michigan but it was a rainy day and Larson had to start deep in the field. The Chevys have a new engine now and they have found some speed since the last race at Michigan. I expect Larson to be a threat to win this week. He is just too good to go the entire season without a trip to Victory Lane.

Kurt Busch (1): Busch came close to winning the last race at Michigan. He won the pole, had a 3.02 average running position, led 46 laps and finished 3rd. Busch has won 3 times at Michigan so he knows how to turn some fast laps at the high-speed track. Busch has some momentum entering the race this week. He has finished the last 4 races in the top 10. He should easily finish in the top 10 again this week.

Clint Bowyer (3): Bowyer won the race at Michigan in June. He had a really fast car. Bowyer qualified 12th, had a 3.59 average running position, led 8 laps and held of Kevin Harvick for the win as the rain poured down. Michigan has not been the best track for Bowyer but it is hard to ignore what he did two months ago. I will have him in my lineup and if he is not running up front I know I will have a great insurance policy waiting in the garage.

Chase Elliott (4): People say the hardest race to win is your first. Elliott checked that box last week with his win at Watkins Glen. It took him a while to find Victory Lane but I would not be surprised if he won again this week. Hendrick Motorsports made some changes to their cars and they have more speed than they had in the first race at Michigan. This tracks ranks as the No. 1 track for Elliott. He has finished 2nd, 2nd, 2nd, 8th and 9th in his 5 races. Now that the monkey is off his back, anything can happen with Elliott this week.

My Garage pick will be Kyle Busch (2). Michigan is not his best track but all that means is Busch is probably a lock for top-10 finish instead of a top-5 finish Sunday. Busch had to start in the back in June and he raced his way to a 4th place finish. How good would he have been if he got to use his 3rd-place starting position? I hope to save this allocation with Busch Sunday but if one of my other drivers does not perform well I will have no problem using the No. 18 car in the race.

Finally my Fantrax Bronze Point Salary Cap Game continues to roll along. I was worried after Stage 2 last week because my picks were only in the middle of the pack in my league. After the pit stops mixed up the running order, my picks shot up to the top of my league standings. It was the fourth week in a row I finished in first and now I am comfortably in the money. I hope you are having the same success in your leagues.

It is time to sell AJ Allemendinger. I was only keeping him on my team for the race at Watkins Glen. I will wait until qualifying and all of the practices are complete before I decide who I will replace him with. Right now I am considering Joey Logano or Jimmie Johnson.