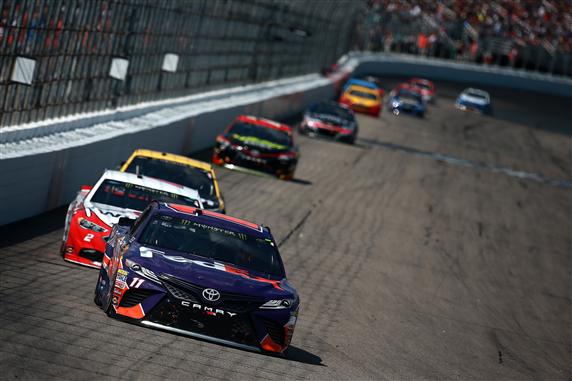 The Monster Energy NASCAR Cup Series will compete at New Hampshire Motor Speedway this week in the Foxwoods 301. This will be the 20th race of the season and there are only seven races left until the playoffs begin. I expect the teams who have not secured their spot to really race hard at the Magic Mile. The race can be seen Sunday at 2 p.m. ET on NBC Sports Network.

The MENCS will have their traditional schedule (the one I like the most) this week. There will be one practice Friday at 12 pm ET (Usually to test qualifying setups), followed by qualifying Friday night at 4:45 pm ET. The drivers will return to the track Saturday morning for two more practices to dial their cars in for the Foxwoods 301. Since we know all the cars will be in race-trim Saturday, I should be able to provide very accurate picks for this race.

The last race at New Hampshire was dominated by two drivers. Kyle Busch won the pole and led 187 laps on his way to Victory Lane. Martin Truex Jr. took the lead from Busch and won Stage 1. Truex ended up leading 112 laps but was collected in an accident when Kevin Harvick spun out on lap 148. Busch and Truex were able to lead 300 of 301 laps in the race (Kyle Larson led the other lap). I expect the same two drivers to compete for the win Sunday afternoon.

NASCAR decided take away one of the dates from New Hampshire. While I understand their reasoning for their decision, I wish we could keep as many of our short tracks as possible on the schedule. The Magic Mile has long, sweeping corners and fast straightaway’s. The name of the game at this track is TIRES!! The driver who can manage his tires the best throughout a long run will be upfront Sunday. Some drivers are just better than others so expect the same drives who performed well at New Hampshire in the past to be the drivers to beat this week.

There are 301 laps the race this week. That means there will be 150.5 points available for fastest laps and 66.75.25 points available for laps led. The trend at New Hampshire is to have one drive lead 150 laps and another driver lead 110 laps. These drivers also score 50-70 laps led so it will be very important to select at least one of these dominators and both if possible for your lineups.  Using a “Stars and Scrubs” lineup at the Magic Mile usually pays off if you hit on the two dominators in your lineup.

The drivers I expect to be the top dominators this week are: Kyle Busch and Martin Truex Jr.

The drivers who could be the top value picks for the race Sunday include: Denny Hamlin, Clint Bowyer, Erik Jones, Ryan Blaney, Daniel Suarez and Matt Kenseth

The drivers I expect to be the best cheap drivers for the race Sunday include: Kasey Kahne, William Byron and David Ragan

I will post my final DraftKings picks Saturday night.

My Fantasy Live picks are ranked 87th overall but I feel like I have been cursed lately. Last week Brad Keselowski was running in the 15th spot and complaining his car was so tight he almost had to downshift in the corners. I put him in the Garage at the end of Stage 2 and Keselowski ends up with the lead to start the final Stage. Are you kidding me!!! I was still able to have all five drivers finish in the top 8, so it was not too bad.

There are 7 races left in the Fantasy Live regular season. I would love to play Kyle Busch and Martin Truex Jr. this week because they are the best picks in the field. I only have one allocation left with Truex and 2 left with Busch. I am going to have to leave these two (and Kevin Harvick) off my team this week. I still think I can find value with the other drivers in the field.

Brad Keselowski (4): Keselowski is still looking for his first win of the season and the No. 2 team will probably need to use pit strategy in order to outrace the Big Three (Kyle Busch, Martin Truex Jr. and Kevin Harvick). That is just what Paul Wolfe and Keselowski are good at. Keselowski may not win this week but he should be one of the safest picks in the field. He has an average finishing position of 6.9 in his last 10 races at the track.

Denny Hamlin (3): New Hampshire is one of the best tracks for Hamlin. He has 3 wins and has led 549 laps at the Magic Mile. If anyone is going to beat Kyle Busch or Martin Truex Jr. this week it will probably be Hamlin. Hamlin has a 7th-place average finishing position in the last 5 races at the track. That includes a win in this race last year. This is a great race to use an allocation with the No. 11 car.

Kyle Larson (4): Larson did not win at New Hampshire but he sure came damn close. Larson finished 2nd in both race and led laps in each of them as well. Larson started 39th in this race last year and raced his way to the runner-up spot. I think he has this track figured out. He just needs to stop having mechanical problems in his car and the wins will start to come.

Clint Bowyer (4): Bowyer may be the best driver behind the Big Three (Kyle Busch, Kevin Harvick and Martin Truex Jr.) New Hampshire was the best track for Bowyer in his first season with Stewart-Haas Racing. He finished both races in the 7th position. I expect Bowyer to continue to roll along and add another top 10 finish to his 2018 resume.

Erik Jones (6): Jones is on a hot streak right now and I am going to play him until he cools off. Jones has finished his last four races in the top seven. He ran well in his last race at the Magic Mile. Jones qualified 8th, had a 6th-place average running position and finished 6th. He is running better now than he was last year so I would not be surprised to see Jones finish in the top 5 Sunday afternoon.

I plan to have Daniel Suarez (10) in the garage this week. Toyota (mainly Joe Gibbs Racing and Furniture Row Racing) has made the Magic Mile their personal playground. Joe Gibbs Racing has won five of the last six races at the track and the Toyota drivers have led 1,168 laps in the last four races at the Magic Mile. Suarez might be the weakest link on the Toyota team, but that does not mean he is not a good pick for your team. Suarez finished 6th and 8th in his two races at New Hampshire last year. I plan to have Suarez in the Garage just in case he runs as well as he did last year at this track.

Finally my Fantrax Bronze Point Salary Cap Game picks came to life. I expected the picks on the 1.5-mile tracks to be easy to predict and I was right. Now it is time to keep the momentum going at New Hampshire.

There are certain drivers who typically run very well at this track. I plan to use as many of them as possible in my lineup. I would love to trade AJ Allmendinger and pick up Denny Hamlin but I think I will save Allmendinger so I have him at Watkins Glenn in two weeks.