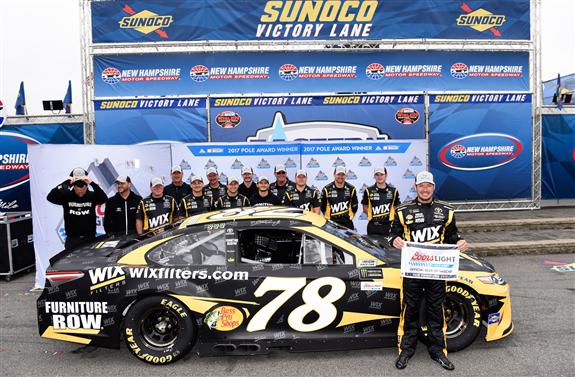 The Monster Energy NASCAR Cup Series competes at New Hampshire Motor Speedway this week for the ISM Connect 300. The race can be seen Sunday at 2pm ET on NBC Sports Network. This will be the second race in the Round of 16 Playoffs for NASCAR’s top series. The “Magic Mile” is one of the best tracks for racing so be sure to check it out Sunday.

The MENCS last competed at New Hampshire in July. The race was dominated by Martin Truex Jr. (137 laps led) and Kyle Busch (95 laps led), but Denny Hamlin was able to take the Checkered Flag in a backup car. Here is the Race Rewind for New Hampshire.

Selecting playoff drivers will once again be important this week. 13 of the 15 drivers in my model are in the playoffs. 9 of the drivers who finished in the top 10 last week were playoff drivers as well. I expect the cream to rise to the top Sunday at the Magic Mile.

Martin Truex Jr. has the best cars in the sport and it would be silly to pick against him. He has led at least 75 laps in the last three races and he could easily have three wins in a row if it were not for bad luck at the end of the race. Truex should have won the July race at New Hampshire. He led 137 laps but had a flat tire with 82 laps to go. He was able to drive through the field and finish 3rd. The only thing that can stop this team right now is NASCAR throwing a caution at the end of the race.

Kyle Larson will be the biggest threat to Martin Truex Jr. this week. Larson led all of the practices but failed to make it to qualifying in the first race at New Hampshire. Larson quickly made his way through the field from his 39th starting position. He finished 2nd in the race. My model really likes Larson this week because Richmond is similar in size and shape to New Hampshire and Larson won that race two weeks ago. He is also the No. 2 driver in the field in momentum in the last four races. I would not be surprise to see Larson clinch a spot in the Round of 12 this week.

Kyle Busch used pit strategy to get to the front in the first race at New Hampshire. He led the second-most laps (95) and finished 12th. The No. 18 car had blazing speed last week but the new pit crew and a speeding penalty cost him a chance to win. It will be interesting to see what Joe Gibbs Racing decides to do with the pit crew for the No. 18 car this week. Busch should be one of the drivers leading laps Sundays as long as the team does not beat themselves.

Kevin Harvick said before the race last week, “We do not have enough speed to compete with the Toyotas.” He could have fooled me. The No. 4 car looked very good at Chicago and I expect the same this week. Stewart-Haas Racing built all new cars for the playoffs and they improved their speed. Harvick won this race last year and he has finished 5 of the last 6 races at the Magic Mile in the top 5. He should easily finish in the top 5 again Sunday.

Denny Hamlin is at his best at New Hampshire. The track ranks as the 2nd-best track for the No. 11 car. No driver has swept the races at the Magic Mile since Kurt Busch did it in 2004. Hamlin should have the speed to run up front and lead some laps this week. Crew chief Mike Wheeler will return from suspension and that should give this team a boost. Hamlin is a good pivot from Martin Truex Jr. and Kyle Busch Sunday.

Matt Kenseth has been the best driver at the Magic Mile the past 3 seasons. He has a series-best average finishing position (2.8), series-best driver rating (121.1) and the most wins at the track (2) since the start of the 2015 season. If Kenseth is going to win a race before he leaves Joe Gibbs Racing it will happen this week. He qualified 4th, led 4 laps and finished 4th in the first race at New Hampshire. I expect similar results from him this week.

Kurt Busch has three wins at New Hampshire but the last trip to Victory Lane was in 2008. The No. 41 team is one of the hottest in the sport right now. Busch ranks 7th in my model in momentum this week because he has finished 3 of the last 4 races in the top 5. Busch qualified 9th and finished 8th in the first race at New Hampshire. He should finish in the top 10 Sunday.

Jimmie Johnson should not be overlooked this week. He has been in a slump over the summer but I expect this to be the breakout race for the No. 48 team. Johnson qualified 2nd in the July race at New Hampshire but was penalized on the start of the race for beating the pole sitter (Martin Truex Jr.) to the line. Johnson fought his way through the field and finished 10th. Johnson has three wins at the track and needs something good to happen. I expect Johnson to run in the top 10 this week.

Chase Elliott showed up with a lot of speed at Chicago. I expected Hendrick Motorsports to have faster cars once the playoffs began but I expected the No. 48 car to be the fastest on the team. Elliott has not had a lot of success at New Hampshire but that does not bother me. Elliott finished 11th and 13th in his last two races at the track. He is a quick learner and HMS will give him a fast car. I expect Elliott to get his first top-10 finish at the Magic Mile Sunday.

Clint Bowyer used to be the driver to beat at New Hampshire. He had two wins at the track while driving for Richard Childress Racing. Bowyer looked pretty good in the July race at the track. He started 19th and finished 7th. He had the 6th-best average running position in the race. Bowyer also ran well two weeks ago at Richmond (The No. 14 car finished 6th). This is a good week to get Bowyer into your lineups.

Jamie McMurray ran well in the first race at New Hampshire but had bad luck at the end of the race. McMurray qualified 4th and had a 12.32 average running position.  McMurray is still competing for a championship so I think the No. 1 team will continue to run well as long as their playoff hopes are alive. I suggest using McMurray now because I think he will fade at the end of the season.