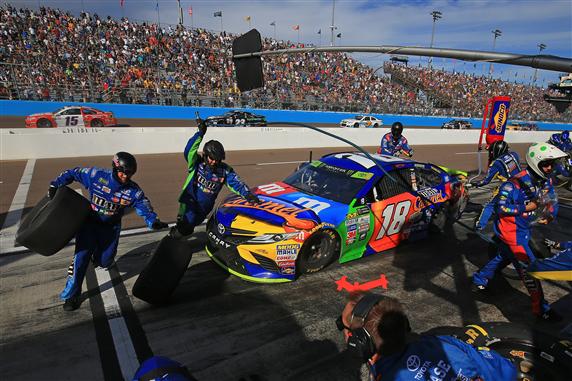 The MENCS travels back to the Arizona desert to set the field for the championship race at Homestead. The landscape of the race this week was shaken up when NASCAR took away the win from Kevin Harvick and docked the No. 4 team 40 points for an illegal spoiler at Texas. Now there will be 7 drivers races for 3 spots in the championship. It should get really interesting at Phoenix.  You can see the race at 2:30pm ET on NBC.

The MENCS last competed at Phoenix in March. Martin Truex Jr. won the pole but was only able to lead 3 laps. Kyle Busch dominated the first Stage. The No. 18 car led a race high 128 laps and finished 2nd. The rest of the race was dominated by 3 drivers. Ryan Newman made his way to the front and led 23 laps. Denny Hamlin led 33 laps. In the end it was Kevin Harvick who made his way to Victory Lane. It was the 9th win for Harvick at IMS Raceway.

The race is at Phoenix is a short race. It is only 310 miles (500 kilometers), but that does not mean the dominators will not be important Sunday. There 312 laps in the race. That means there are 78 bonus points available for leading laps and 156 points available for fastest laps. The trend at Phoenix is to have one driver lead around 145 laps, another led 60 laps and two drivers lead between 25-30 laps. The fastest laps tend to get more spread out this week but the 4 drivers who lead over 25 laps will still score the majority of the fastest laps. We must have at least two dominators in our lineups at Phoenix.

The drivers I expect to be the top dominators this week include: Kevin Harvick, Kyle Busch, Joey Logano and Chase Elliott

The drivers who could be the top value picks (between $9k – $7K) for the race Sunday include: Clint Bowyer, Denny Hamlin, Erik Jones, Aric Almirola, Alex Bowman and Ryan Newman

The drivers I expect to be the best cheap drivers (below $7K) for the race Sunday include: Matt Kenseth, William Byron, Regan Smith and David Ragan

My two Playoff Drivers will likely be Kevin Harvick and Kyle Busch. You almost have to have Harvick in your lineup any time the MENCS races at Phoenix. He has 9 trips to Victory Lane at ISM Raceway, including the race in March. Harvick has not been dominating the races at Phoenix like he used to, but he still is a lock for a top 5 finish. Harvick will have a lot more to race for after the penalty Wednesday. The No. 4 team usually goes out and dominates the field after NSCAR embarrasses them.

Kyle Busch has been just as good at Phoenix as Kevin Harvick. The No. 18 car has actually been better at running up front and leading laps. Busch has led at least 110 laps in 2 of the last 3 races at Phoenix. He has also scored the most Stage points. Busch will be the biggest threat to Harvick for the win Sunday.

My two Non-Playoff Drivers are likely to be Denny Hamlin and Erik Jones. Hamlin often gets overlooked at Phoenix but he shouldn’t. Hamlin has led the 2nd-most laps at Phoenix since the MENCS started Stage racing last year. Hamlin almost won this race last year but Chase Elliott decided to serve his revenge on Hamlin for wrecking Elliott at Martinsville. Hamlin runs better when he is not under any pressure. I expect the No. 11 car to spend a lot of time in the top 5 Sunday.

Erik Jones may not be on many teams this week but he should be. Jones has competed in 3 MENCS races at Phoenix and he has never finished outside the top 10. Joe Gibbs Racing usually performs well at ISM Raceway. It would be a good idea to use as many of their drivers as possible. Jones should add another top-10 finish to his 2018 resume this week.

I trust Kyle Busch and Kevin Harvick to run up front, score Stage points and finish in the top five. There is no reason to waste the Garage Driver pick on a Playoff Driver. I plan to use Alex Bowman in the Garage this week. This is one of the best tracks for Bowman. He drove the No. 88 car for Dale Earnhardt Jr. at Phoenix in 2016. Bowman won the pole, led 194 laps and finished 6th. He may not be that good this week, but he should still finish in the top 10.

Anything that could go wrong did go wrong for my Fantrax picks at Texas. I was expecting a lot more out of Clint Bowyer after he qualified 2nd but he dug himself a hole early in the race. Martin Truex Jr. and Kyle Busch did not live up to expectations either. Hopefully our luck turns around in the last two races.