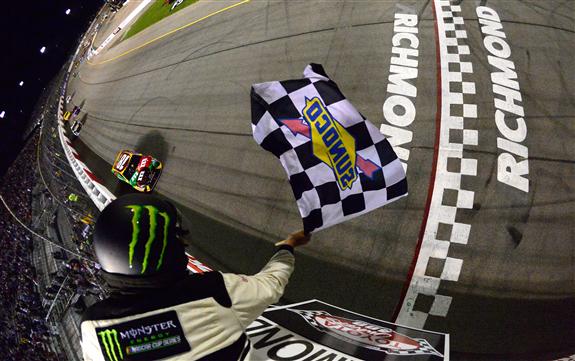 The MENCS travels back to Richmond, Virginia for the Federated Auto Parts 400. This will be the second race in the MENCS Playoffs and hopefully it is not as crazy as the first. The race can be seen Saturday night at 7:30pm ET on NBC Sports Network.

The MENCS will have two practices Friday (11:30am ET and 12:30pm ET NBCSN). Qualifying will be Friday evening at 6 PM ET on NBCSN. My picks will be posted early Saturday morning.

The MENCS last competed at Richmond in late April. The race was dominated by Martin Truex Jr. and Joey Logano. The No. 78 car won the pole and led a race high 121 laps. Truex was running 2nd when the caution came out with 9 laps to go. His team dropped the jack and Truex came out of the pits in 1th-place, running his night. Logano took the early lead and won Stage 1 and Stage 2. Logano was able to led 92 laps and finished 4th. Kyle Busch fought a tight racecar all night but the team kept working on it and his pit crew got him out first on the last stop. Busch went on to win his series-high 5th race at Richmond.

The drivers I expect to be the top dominators this week include: Kyle Busch, Martin Truex Jr., Joey Logano and Denny Hamlin

The drivers who could be the top value picks (between $9k – $7K) for the race Sunday include: Kurt Busch, Aric Almirola, Daniel Suarez and Jamie McMurray

The drivers I expect to be the best cheap drivers (below $7K) for the race Sunday include: William Byron, Chris Buescher, Ricky Stenhouse Jr., Regan Smith and David Ragan

So what do you think of the new Fantasy Live Playoff Game? I hate it, but it is what is so I will keep making picks. Last week was a disaster. I never thought the driver (Kevin Harvick) who led 80% of the laps at Las Vegas in March would finish 39th in September. Thank you GoodYear and thank you NASCAR for schedule a race in Las Vegas in the summer. At least a lot of teams crashed and burned this week so it was not only my picks.

I need to make up some ground on the competition and this is a good week to find some contrarian picks who could race well and shoot us up the standings. Most people will simply select Kyle Busch and Kevin Harvick and move on to their non-playoff drivers. Both of these drivers are great picks for there are many other good picks this week. I plan to go with Martin Truex Jr. and Joey Logano. Truex led 121 laps in April, 198 laps last year and 193 laps at Richmond in 2016. He has dominated each race but bad luck prevented him from going to Victory Lane. Logano has not finished outside the top 10 at Richmond since 2012. He has finished 1st, 2nd and 4th in his last 3 races at the track and he led 92 laps in April. The plan right now is to pair the No. 78 with the No. 22 in the Playoff spot.

My two Non-Playoff Drivers are likely to be two drivers who have nothing to lose and everything to gain by running well Saturday night. Jamie McMurray and Ryan Newman both know they are out of their current cars at the end of the season. Performing well in the playoffs will help them secure a seat for the 2019 season. Both drivers have a history of running well at Richmond and both have stepped up their game since the rumors started to fly that they were looking for a new place to drive. I plan to take a chance with McMurray and Newman Saturday night.

Selecting a Non-Playoff Driver for my Garage spot will continue to be my strategy. It did not pay off last week but that was a wild race. The first race at Richmond did not have a caution until there were 38 laps in the race. I expect the race Saturday night to be more calm than what we saw at Las Vegas so our Playoff Drivers should not need to be swapped out.

My Garage Driver this week is Daniel Suarez. He is another driver who is racing for his future. Richmond ranks as the 2nd-best track for Suarez so he should have less risk than usual. Suarez has competed in three MENCS races at Richmond and he has finished 7th, 10th and 12th. I plan to have the No. 19 car in the Garage this week.

I was worried about my Fantrax Salary Cap game picks when Kevin Harvick and Erik Jones were taken out of the race at Las Vegas. I felt better once everyone else had multiple drivers involved in a crash. The race Saturday night should be easier to predict so I expect a lot better results.