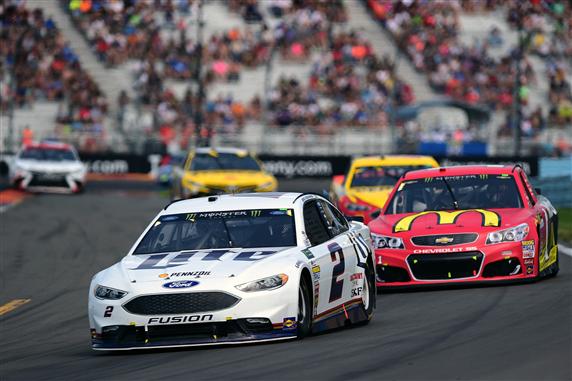 The Monster Energy NASCAR Cup Series will compete at Watkins Glen International Speedway this week in the Go Bowling at the Glen. This will be the second race of the season on a road course. This track usually provides great racing and some horrific crashes. The race can be seen Sunday at 2:30 p.m. ET on NBC.

Four drivers dominated the race at Watkins Glen last year. Kyle Busch won the pole and absolutely dominated every lap in Stage 1. The No. 18 car had a loose wheel and had to re-pit. Busch fell deep in the field and never regained his track position. Daniel Suarez took over the lead and led 14 laps to win Stage 2. Martin Truex Jr. took the lead to start the last Stage and led most of the laps until Brad Keselowski took the lead from the No. 78 car. Keselowski led 20 laps but in the end Truex outraced the No. 2 car on his way to Victory Lane.

Watkins Glen is a lot faster and less technical than the road course at Sonoma. Many of the drivers who are not necessarily considered road course aces can navigate the seven turns at the Glen. The track this week is built more for speed. Brakes were an issue for many of the teams last year and it will be an issue Sunday. Drivers must manage their brakes because of the high speeds generated on this fast road course. Make sure you watch the action at the “bus stop” Sunday. This is where most drivers try to make their move and where some drivers get spun out. This should be a good race and some unexpected drivers will finish up front. They always do at Watkins Glen.

The race this week at Watkins Glen is the shortest race of the season… at least as far as laps go. There are only 90 laps in the race. The trend in the last three races at Watkins Glen is to have one driver lead nearly 25 laps, one led 20 and another lead between 15-20 laps. These three drivers usually score the fastest laps because a clean track is king on the road courses. This means there are likely to be three dominators in the race Sunday but you do not need them in your lineup.

The drivers I expect to be the top dominators this week are: Kyle Busch, Martin Truex Jr. and Denny Hamlin

The drivers who could be the top value picks (between $9k – $7K) for the race Sunday include: Kurt Busch,  Brad Keselowski, AJ Allmendinger and Daniel Suarez

The drivers I expect to be the best cheap drivers (below $7K) for the race Sunday include: Matt Kenseth, Erik Jones, Michael McDowell and Chris Buescher

My Fantasy Live picks actually climbed in the standings after the race at Pocono. I thought for sure I would fall after Brad Keselowski wrecked, but hey.. It is better to be lucky than good. My picks are now ranked 101st out of nearly 400,000 entries. There are only 5 races left in the regular season. I am go to do my best to make sure my picks finish inside the top 100 in Fantasy Live for the 4th consecutive season.

There are 6 races left in the Fantasy Live regular season. I would love to play Kyle Busch, Kevin Harvick and Martin Truex Jr. this week because they are the best picks in the field. I only have one allocation left with Harvick and Truex and 2 left with Busch. The plan right now is to fade the “Big Three” again this week. I will have to see how they look in practice and where they qualify before I make my final decision.

Denny Hamlin (1): Joe Gibbs Racing has been running really well at Watkins Glen. Hamlin won at this track in 2016 and finished 4th last year. He finished in the top 10 and led laps at Sonoma earlier this season and he should do the same Sunday. The No. 11 team needs a win to secure their spot in the playoffs and earn some playoffs points. I expect crew chief Mike Wheeler to gamble to ensure Hamlin has a chance to win. There are not many pit stops in this race and that is good news for Hamlin. He has a tendency of getting penalties in the pits. That should not be a problem Sunday.

Brad Keselowski (2): I am quickly running out of patience with Keselowski. He crashed two weeks in a row yet here he is on my team again. I do not think a cut tire can be blamed on Keselowski. I am going to give him one more chance to prove he deserves a spot on my team. He is really good at Watkings Glen. Keselowski has finished 4 of the last 7 races at the Glen in the top 3. He has also led at least 28% of the laps in every race since 2014 at the track. Keselowski better not crash again this week!!

Kurt Busch (1): Busch is one of the best road course drivers in the sport and the No. 41 team has been running well this season. Busch has a 6.2 average finishing position at Watkins Glen in the 4 races with Stewart-Haas Racing. Busch has never won a race at Watkins Glen but he has finished 9 of the last 11 races at the track in the top 11. That is good consistency.

Clint Bowyer (4): Bowyer is a very good road course racer. He is a little better at Sonoma than he is at Watkins Glen but that does not mean he is a bad pick this week. Bowyer has a 10th-place average finishing position in the last 7 races (dating back to 2011 and that is with some less-funded teams) at Watkins Glen. He finished 3rd at Sonoma in June and he should run up front Sunday.

AJ Allmendinger (8): I know it is hard to trust Allmendinger because we have been burned by him so many times on the road courses. He is a lot better at Watkins Glen than he is at Sonoma so I think we need to give him a chance. He has run 9 races in his career at Watkins Glen. Allmendinger has a 9.8 average starting position and a 9.3 average finishing position. He has only finished outside the top 10 one time in the last decade. He “should” be a safe pick this week. Allmendinger will drive the No. 23 GMS Racing car in the Xfinity Series race Saturday. The extra seat time should help him in the race Sunday.

My Garage pick will be Daniel Suarez (9). Suarez was the biggest surprise in the field last year at Watkins Glen. Suarez qualified 5th, led 14 laps, won Stage 2 and finished 3rd. That is impressive for a driver’s first time at a track. After the race Suarez said this track reminds him of the track he ran at in Mexico. This was by far the best race for Suarez last year so I will give him another chance this week. He should have some momentum after his 2nd-place finish at Pocono.

Pick for the Pole: Kyle Larson

Finally my Fantrax Bronze Point Salary Cap Game continues to roll along. My picks we the top in my league last week and that is three consecutive weeks at the top for me. I hope you are having the same luck with my picks.