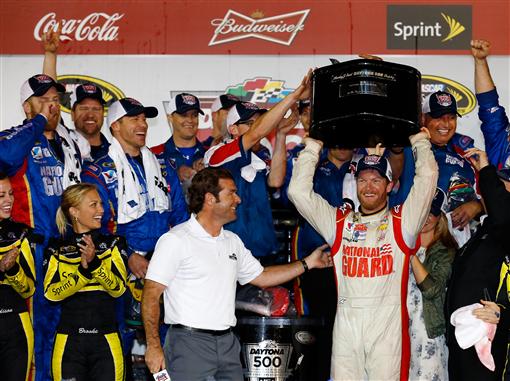 The 2017 Daytona 500 is almost here and this is a great time to start looking at which drivers dominate on the Superspeedways. There are three drivers (Dale Earnhardt Jr., Brad Keselowski and Denny Hamlin) who perform better than the rest, but will the new scoring format bring new drivers to the front?

The days of riding in the back of the pack to avoid the big wreck may soon be coming to an end. NASCAR decided to break the races down into Three Stages this year. Drivers earn points for finishing in the top 10 in first Two Stages and one bonus point for winning each Stage. Drivers will do everything they can to race inside the top 10 and earn bonus points in the race.

1. Dale Earnhardt Jr. had a horrible season on the Superspeedways last year. He finished 36th in the Daytona 500 and 40th at Talladega. He is still our No. 1 driver on the restrictor-plate tracks because no active driver comes close to his 10 wins at the two tracks.

The best way to win on the Superspeedways has been to run up front and stay up front. This should not be a problem for Earnhardt. He has led a series-high 302 laps in the last 10 restrictor-plate races. He also has run 67.9 percent of the laps in the top 15.

2. Brad Keselowski is becoming one of the best drivers at the Superspeedways. His five wins are second-most in the Monster Energy NASCAR Cup Series. Keselowski has won two of the last three races at the restrictor-plate tracks and he should have a good chance to win his first Daytona 500 this season.

Keselowski scored a series-high 222.5 points in Fantasy Live last year and the fourth-most points (323) in Yahoo Fantasy Auto Racing. Keselowski is also good at running up front. He led the second-most laps (264) and ran 66.8 percent of the laps in the top 15 in the last 10 restrictor-plate races.

Keselowski is better at Talladega than he is at Daytona, but he should be considered for all fantasy teams whenever the series competes at the Superspeedways.

3. Denny Hamlin completes the list of three drivers who have dominated the Monster Energy NASCAR Cup Series at the Superspeedways in the last four seasons. Dale Earnhardt Jr., Brad Keselowski and Hamlin have won eight of the last 12 races at the restrictor-plate tracks, so there is a good chance the winner of the four races at Daytona and Talladega in 2017 come from these three drivers.

Hamlin scored the sixth-most points (171.5) in Fantasy Live and the fifth-most points (314) in Yahoo Fantasy Auto Racing at the Superspeedways in 2016.

Hamlin won the Daytona 500 last year and he could be the first back-to-back winner of the race since Sterling Marlin did it in 1994 and 1995. What helps Hamlin and may take him to the top of this list is the strength of his teammates. Joe Gibbs Racing has worked well together on the Superspeedways and it would not be a surprise to see Hamlin have one of the JGR cars pushing him to the checkered-flag in the races at Daytona and Talladega this season.

4. Joey Logano has three wins at the Superspeedways including a trip to Victory Lane in the 2015 Daytona 500. Logano is still young, but it is no secret that his has learned how to manipulate the draft to make his way to the front. Logano has led 108 laps and ran 64.8 percent of the laps in the top 15 in the last 10 restrictor-plate races. He has worked very well with his teammate (Brad Keselowski) to get to the front at the end of the races.

5. Jimmie Johnson is one of the most underrated drivers on the Superspeedways. All he has done in his career on these tracks is to win five races (including two Daytona 500s) and lead 745 laps. Johnson works very well with his teammate (Dale Earnhardt Jr.) at Daytona and Talladega and that could be the key to his success in 2017.

Johnson should pair up with Earnhardt at the Superspeedways this year and have a great chance to finish all four races in the top 10.

6. Kyle Busch is a risky pick for fantasy teams because of his aggressive racing style. It seems as though Busch either finishes in the top five or outside the top 35. His recent performances show that he is starting to mature as a driver and becoming more consistent at finishing up front at the Superspeedways. Busch finished three of the four races last year at Daytona and Talladega in the top three.

Busch has two career wins on the restrictor-plate tracks. Both of his wins came in 2008 (one at Daytona and one at Talladega). As a member of Joe Gibbs Racing, Busch should have a good chance to add more trips to Victory Lane on his resume. The team has really helped his performances at these tracks.

Busch was the best option last year in Yahoo Fantasy Auto Racing at the Superspeedways. He scored a series-high 338 points. Busch was also good in the Fantasy Live game as well. He scored 170 points which was one point behind his teammate, Denny Hamlin.

Busch is a better option for fantasy teams in games where there are unlimited allocations. Busch is so good at the other tracks that it is better to save him in the Yahoo Fantasy Auto Racing game for the smaller tracks.

7. Matt Kenseth is much better in real life than he is in Fantasy Racing on the Superspeedways. Kenseth usually runs most of the race up front, often leading many laps. He has had a history of finding trouble at the end of the race. Last year Kenseth finished three of the four restrictor-plate races outside the top 20. That does not mean he is a bad option for your team.

Kenseth has three wins on the Superspeedways (including two Daytona 500s) and has led 875 laps (second-most in the series). He often leads the Joe Gibbs Racing cars around the track. The No. 20 car will be a good option for Fantasy NASCAR teams who want to go against “The Big Three”.

8. Kurt Busch is the best driver to never have won on the Superspeedways. Busch has finished 19 races in the top five at Daytona and Talladega. Stewart-Haas Racing has four drivers who are pretty good at these types of tracks, so it would not surprise me to see the No. 41 car in Victory Lane at one of the four restrictor-plate races this season.

The new scoring format for NASCAR should play right into Busch’s racing style. He has run a series-high 74.4 percent of his laps in the top 15 in the last 10 races at the Superspeedways. Busch is not the type of driver to hang out in the back of the field. He likes to race up front.

Busch will be a good option in Fantasy Live and the best option in Group B of Yahoo Fantasy Auto Racing this season at Daytona and Talladega.

9. Kevin Harvick is one of the drivers where past stats may not matter much. Harvick is known as the closer because he likes to ride at the back of the pack and make his way to the front at the end of the race. That driving style will not earn him any Stage points this year, so expect the No. 4 car to be up front a lot more than usual.

Harvick knows how to get to Victory Lane at the Superspeedways. He has three wins (including one in the Daytona 500) and led 366 laps. Harvick worked well with Clint Bowyer when the two raced for Richard Childress Racing. Now that they are teammates at Stewart-Haas Racing, fantasy teams should expect the two to work together again.

Harvick is a much better choice in Fantasy Live than he is in Yahoo Fantasy Auto Racing. His allocations are too important to be wasted at a restrictor-plate track where he has limited control over his fate in the race.

10. Austin Dillon is one of the best bargains in Fantasy NASCAR when it comes to racing at the Superspeedways. His price is usually low in salary cap games but his value is very high. Dillon has a series-best average finishing position in the races at Daytona and Talladega. What else would you expect from a car carrying the No. 3?

What makes Dillon so good is his consistency. Dillon has finished five of his last six races at the restrictor-plate tracks in the top 10. He has only had one DNF in his 14 races.

Dillon scored the eighth-most points 166 in Fantasy Live and the second-most points (327) in Yahoo Fantasy Auto Racing last year. He is a good option for all Fantasy NASCAR teams at the Superspeedways in 2017.