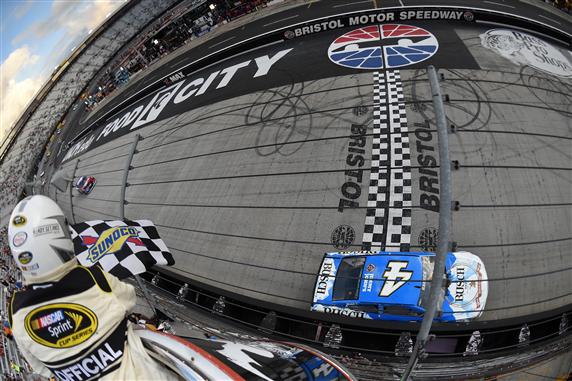 The Monster Energy NASCAR Cup Series travels to Bristol, Tennessee this week for the Bass Pro Shop NRA Night Race. The race can be seen Saturday night at 7:30pm ET on NBC.

The word in the garage last week was that the Toyotas were “dialing their cars back” because NASCAR usually takes cars from each manufacturer after either the race at Indianapolis, Pocono or Michigan. There were too many wrecks at Indianapolis for NASCAR to take cars from and the series did not take any cars from Pocono, so must teams believed the cars would be taken after the race at Michigan to see if any manufacturer had an advantage. Some drivers (Brad Keselowski) thought the Toyotas were sandbagging since they qualified poorly last Friday.

It sure did not look like the Toyotas were sandbagging to me. Four Toyotas were running in the top five at the end of the race (Martin Truex Jr., Erik Jones, Kyle Busch and Matt Kenseth). I am selecting my teams this week based on the fact that Toyota is sandbagging is nonsense. They looked good last week and I am sure the Toyotas will be fast Saturday night.

The spring race at Bristol was dominated by four drivers. Kyle Larson won the pole and led 202 laps. Martin Truex Jr. qualified 3rd and led 116 laps. Joey Logano also had a strong race. The No. 22 car started 5th and led 72 laps. Jimmie Johnson slowly worked his way through the field and led 81 laps on his way to Victory Lane.

You can see the highlights from race at Michigan here: Race Rewind Bristol

The fall race at Bristol tends to see a lot more aggressive driving than we see in the spring race. There are only three races until the Playoffs begin and drivers on the bubble will do everything they can to win the race. Sometimes this means pushing other drivers out of the way. This will be a good race to leave your star drivers on the bench in allocations games (Yahoo Fantasy Auto Racing) and take some chances in other games (Fantasy Live and DraftKings).

Kevin Harvick won this race last year and he is my pick to win this week. Harvick has a streak of five consecutive top-10 finishes at Bristol. His average finishing position in the last two night races in Thunder Valley is 1.5. Harvick has led 442 laps in his seven races with Stewart-Haas Racing at the track. Harvick has consistently run in the top 10 this season and he should be fast enough to get to Victory Lane Saturday night.

Martin Truex Jr. is not the first name that comes to mind when fantasy players think of picks for Bristol. He has never won at the track and he only has one finish in the top 10 in his last nine races at the track. So why is Truex on the list? This team has dominated every track this year and it will not change Saturday night. Truex had his best career race at Bristol in April. He qualified 3rd and led 116 laps on his way to an 8th-place finish. I expect this team to run in the top five again this week.

Kyle Busch has been horrible at Bristol in his last three races. He finished 35th, 39th and 38th. His poor performances were caused by bad luck more than they had to do with his driving skills. Busch has a series-high five wins at Bristol, a series-high 1,959 laps led and the second-best driver rating (100.5) at the track. Do not count out Busch because of his recent performance. The No. 18 car will be one of the fastest in the field Saturday night.

Denny Hamlin has been good but not great at Bristol. He only has one win at the track (2012) but he consistently finishes in the top 10. Hamlin is on the list simply because of how strong the Joe Gibbs Racing cars have been in the recent races. Hamlin qualified 16th, led 10 laps and finished 10th in the spring race in Thunder Valley. The No. 11 team should improve upon those numbers this week.

Chase Elliott has a series-best 8.67 average finishing position at Bristol. Elliott qualified on the front row and finished 7th in the first race in Thunder Valley. He is on the bubble of making the Playoffs so a win would really help the No. 24 team out in the final two races. Hendrick Motorsports is a smart organization and they should give Elliott the best car in their garage to help him get to Victory Lane Saturday night. HMS won the last race at Bristol and they could make it a clean sweep this week.

Jimmie Johnson should be one of the favorites to win Saturday night. He won the April race at Bristol and he has finished five of his last six races at the track in the top seven. It is just hard to trust the No. 48 team right now. Johnson has an average finishing position of 27.5 in his last four races. He has only finished one race inside the top 20 (19th last week) since the race at New Hampshire. Johnson will either win the race of finish outside the top 20 Saturday night. It is up to you if you are will to take a chance with him.

Jamie McMurray is having a career season but he still has not locked himself into a Playoff spot. The No. 1 team will do whatever it takes to get McMurray to Victory Lane. He has never won at Bristol but he does have 12 finishes in the top 10 at the track. McMurray usually qualifies better than he races this season. That was the case for the No. 1 car in the first race at Bristol. McMurray qualified 8th and finished 12th. I think he should qualify in the top five and finish in the top 10 this week.

Clint Bowyer is another bubble driver who I will be selecting for many of my teams this week. Bowyer is currently on the outside looking in at the Playoffs. The No. 14 team desperately needs to win one of the last three races before the Playoffs begin. Bristol may be his best shot. Bowyer qualified 9th and finished 2nd in the spring race in Thunder Valley. He needs to improve one spot if he wants to race for the championship in 2018.

Erik Jones ran pretty well in his first MENCS race at Bristol. He qualified 14th and finished 17th. I expect a major improvement from the No. 77 team this week. The Toyotas have made significant gains in their racing package since the last race at Bristol. Jones will also have more experience now that he has competed against the top cars at this track. Jones dominated the Xfinity Series races at Bristol. In his 5 races he won 3 poles. It is just a matter of time before he becomes the best driver in the MENCS in Thunder Valley.

Ricky Stenhouse Jr. is the driver that must be on every team this week. This is by far his best track. This will be a great race to use the No. 17 car in allocation games and his performance will exceed his price in salary cap games. Stenhouse finished 2nd in this race last year and 9th in the spring race. His average finishing position at the track is 10.4. He should add another top-10 finish to his Bristol resume Saturday night.

Ryan Newman is good at Bristol because he is the toughest driver in the sport to pass and this is one of the toughest tracks to pass other cars. Newman has been good but not great in his last five races at the track. His average qualifying position is 16.2 and his average finishing position is 13.2. He is a good choice to save an allocation with in the Yahoo Fantasy Auto Racing game and he will be a good choice in Fantasy Live and DraftKings if he does not qualify in the top 15.

I will have my picks updated on my website (Fantasy Racing Tips) after the final practice Saturday.