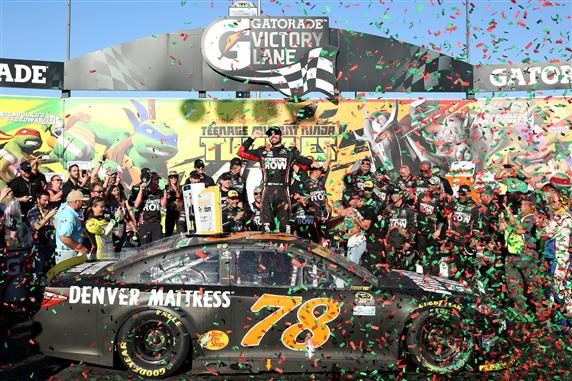 The Monster Energy NASCAR Cup Series competes at Chicagoland Speedway this week for the Tales of the Turtles 400. The race can be seen Sunday at 3pm ET on NBC Sports Network.

If it was not for bad luck I would not have had any luck at all last week. My drivers were wrecked by an ambulance? Seriously!!!! Well at least I was able to finish pretty well in most of my leagues.  My Yahoo Fantasy Auto Racing picks rank in the top 98% (7,453 points). My Fantasy Live picks rank in the top 99.7% (6,883 points and 605th overall). My Fox Fantasy Auto Racing picks rank in 19th in overall standings (4,662 points). There is still room to improve in the final 10 races.

This will be the first race of the 2017 NASCAR Playoffs. Usually the drivers who are competing for the championship run up front in the final 10 races. The drivers who are eliminated usually give the drivers still in the playoffs plenty of room on the track. The last thing that eliminated drivers want to do is ruin another driver’s championship chances. The teams usually give their drivers who are in the playoffs their best cars and use all of their resources to get these drivers to the front (For example: Team Penske will use all of their good cars and resources on Brad Keselowski since he is running for the championship and Joey Logano is not).

The drivers who have run well the past month will be the best drivers to select for Chicago. Momentum is important in NASCAR so I will be looking at the driver’s average running position at the 1.5-mile tracks in 2017, driver rating at Chicago and drivers average finishing position at Michigan, Darlington and Richmond to figure out which drivers are the best selections this week.

Three drivers participated in a tire test at Chicagoland Speedway earlier this season. NASCAR let one team from each manufacturer practice different tire combinations and setups. Chase Elliott (Chevy), Daniel Suarez (Toyota) and David Ragan (Ford) each ran laps in the test and should unload with some speed Friday.

Martin Truex Jr. is my pick to win the opening race of the playoffs. Did you see how pissed off Truex looked after the race Saturday night? This team wants to make a statement this week and the odds are high that Truex will get the job done. Truex won the race at Chicago last year and he has three wins on the 1.5-mile tracks this season (Las Vegas, Kansas and Kentucky). Truex has led 1,646 laps this season. He will add to that total on his way to Victory Lane.

Kyle Larson has been the second-best driver in the sport this season. He has four wins this season (California, Michigan twice and Richmond). The win last week proved that Larson is not a one trick pony. He can win at 2-mile ovals, shorts tracks and I would not bet against him on the 1.5-mile track at Chicago. Larson finished second at Atlanta, Las Vegas, Texas and Kentucky (all 1.5-mile tracks). He is the second-best pick in the field this week.

Kyle Busch starts the playoffs third in the point standings. He may have been second if he did not get off to a slow start. The No. 18 team is one of the hottest in the sport right now and it would not surprise me if they won the race Sunday. After his slow start, Busch finished 5th at Kansas, 2nd at Charlotte, 5th at Kentucky and 2nd at Darlington (all 1.5-mile tracks). Busch has five consecutive finishes in the top eight at Chicago. He should easily finish in the top five Sunday.

Kevin Harvick has been one of the most consistent drivers in the sport this season. Every Monday is Blooming Monday because Harvick finishes in the top 10 and rewards people with a free blooming onion from Outback Steakhouse. The problem is the No. 4 team has not had the speed to lead laps and win races. That could change this week. Crew chief Rodney Childers said Stewart-Haas Racing built all new cars for the playoffs. He thinks they found something that will work so fantasy teams need to keep an eye on this team this week.

Brad Keselowski had a lot of speed at Richmond last week but will the Blue Deuce have enough speed to run up front at a 1.5-mile track? Keselowski should easily finish in the top 10 but Team Penske needs to find more speed if Keselowski wants to win Sunday. He has been very good at Chicago in his career. He has two wins and a 4.5 average finishing position at the track the last six seasons. If this race comes down to fuel-mileage, I like Keselowski’s chances this week.

Chase Elliott has been good on the 1.5-mile tracks this season and Chicago is his best track. Last year Elliott started 14th and quickly made his way to the front. He led 75 laps on his way to a third-place finish. Elliott also has a win at Chicago in the Xfinity Series. It is hard to tell what Hendrick Motorsports has up their sleeve this week. If I were a gambling man I would put my money on their two playoff cars being fast this week.

Kurt Busch has had an up and down season. He is trending upwards right now and fantasy NASCAR players need to start using him before he cools off. The No. 41 team said they could some speed in a tire test in early August. Their results prove this is true. Busch finished 5th at Bristol, 3rd at Darlington and 4th at Richmond. Busch has a 7th place average finishing position at Chicago the last four seasons. He should finish in the top 10 again this week.

Jimmie Johnson is not a driver I usually use in my “Sleeper” list but I consider him a sleeper this week because most Fantasy NASCAR teams will be avoiding him this week. That could be dangerous. The No. 48 team has not had any speed over the summer, but I do not think it matters. I have seen this before and I am not getting fooled again. The No. 48 teams always slumps in the heat and then wins races in the playoffs. Johnson has finished 7 of his 15 races at Chicago in the top five. He could be the surprise pick of the race Sunday.

Jamie McMurray started of the season running really well. He has cooled off the last month but I think the No. 1 team went into prevent mode. They knew they had enough points over Clint Bowyer that they would make the playoffs as long as no new drivers won the race. I expect McMurray to get back to running well again. He has finished 6 of the 7 races this season on the 1.5-mile tracks in the top 10. His worst finish in 12th at Charlotte. I expect another top-10 finish from McMurray Sunday.

Erik Jones has been close to getting his first win in the MENCS. Although the No. 77 is eliminated from the playoffs, I still expect them to run well. Jones has never competed in a MENCS race at Chicago but he went to Victory Lane in 2 of his 3 races in the Xfinity Series at the track. Chicago is one of the best tracks left on the schedule for Jones.

Ryan Blaney has been a hard driver to trust over the summer. I think the reason why the team slowed down is because there were only two 1.5-mile tracks on the schedule since the beginning of June (Kentucky and Darlington). Blaney has run well at the 1.5-mile track and Chicago is his best. Last year he qualified 22nd and led 8 laps on his way to a 4th place finish. Blaney needs a good finish to advance in the playoffs. I expect the No. 21 and No. 2 cars to work closely this week to make sure they run well.