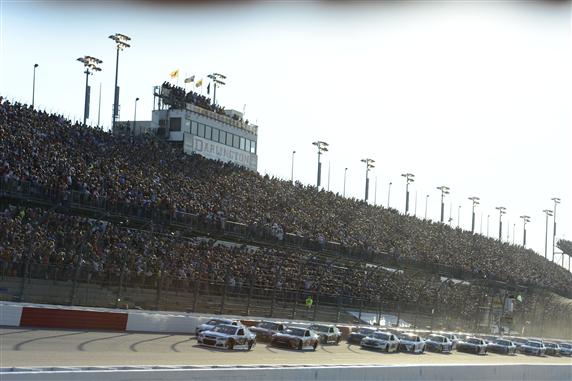 The Monster Energy NASCAR Cup Series travels to Darlington, South Carolina this week for the Bojangles Southern 500. The race can be seen Sunday night at 6:30pm ET on NBC.

The Southern 500 is one of my favorite races of the season. I love seeing the throwback paint schemes. “The Lady in Black” or “The Track Too Tough To Tame” is a real challenge for drivers and their crew chiefs because it is a unique 1.366-mile, egg-shaped track with different banking on both ends. Experience really matters this week so using drivers with a good track history is the best way to select your team.

Here are the drivers with the best driver rating, best average finishing position and most laps led at Darlington since 2014…

You can see the highlights from 2016 race at Darlington here: Darlington Race Rewind

Denny Hamlin has been very good at Darlington in his career. He has a series-best average running position and a series-best average finishing position at The Lady in Black. Hamlin qualified 6th, led 57 laps and finished 3rd in this race last year. The Toyotas are running better in 2017 than they were at this time last year. Hamlin won this race in 2010 and he is my pick to go to Victory Lane Sunday night.

Martin Truex Jr. has been the driver to beat this year and he is the defending champion of the Southern 500. Las Vegas odds has Truex as the co-favorite to win this race at 7/2 (Kyle Busch also has 7/2 odds). Truex only led 28 laps on his way to Victory Lane last year. He won the race because of his excellent pit crew and the changes crew chief Cole Pearn made to the car throughout the race. Truex should easily finish in the top five Sunday night.

Kyle Busch can never be counted out at Darlington. He won this race in 2008 and his average finishing position since 2010 is 7.4. Busch will have a lot of momentum after winning the race at Bristol. The No. 18 car should qualify up front and lead laps. The question is whether or not the team can put together a complete race to finish in Victory Lane. They have a habit of finding ways to mess things up at the end of the race. 500 miles is a long race and Busch will be good for at least 450 of them. It is the last 50 that makes me worry.

Kevin Harvick should be my pick to win this week. He has the best stats in the field at Darlington. Harvick has a series-best driver rating, series-best average finishing position and led the most laps in the last two races at The Track Too Tough To Tame. Harvick has consistently finished in the top 10 this season, but the No. 4 car has not had the speed to keep up with the Toyotas. Harvick has not led any laps in an oval race since the race at Charlotte in May. Harvick is a safe pick to run in the top 10, but the No. 4 team will have to find some speed if they want to go to Victory Sunday night.

Kyle Larson has completed in three races at Darlington and he has never finished outside the top 10. The best way to run fast laps at The Lady in Black is to run right up against the wall. Few drivers do it as well as Larson. His dirt track racing experience is a factor into why he is so good at this track. Larson may have the most Darlington stripes on his car Sunday night but he is a safe pick to finish in the top 10.

Brad Keselowski has run well at Darlington the last two seasons. The main reason why he has been so good is because the No. 2 car has been the best car at qualifying at the track. Keselowski started 2nd last year and won the pole in 2015. He led 243 laps in these races and finished both in the top 10. Team Penske lost the speed they had earlier in the season. I would be surprised if Keselowski won the pole. He should be a good pick for a top 10 finish Sunday night because of his track history and his crew chief Paul Wolfe.

Jamie McMurray desperately needs a win Sunday night to secure his spot in the playoffs. McMurray is 16th in the point standings and he would be knocked out of the playoffs if a driver behind him in the standings won the race this week. McMurray is a big race driver. He has won the Daytona 500, Coca-Cola 600 and the Brickyard 500 in his career. He only needs a win in the Southern 500 to have wins in all of the major races in NASCAR. McMurray has consistently finished in the top 16 at The Track Too Tough To Tame. He is having a career year, so a top 12 should be within reason Sunday night.

Ryan Newman is a perfect fit for Darlington. The track is a tough and Newman is a tough old school driver. He was leading this race last year with only 29 laps to go. Newman is still looking for his first win at The Lady in Black, but he has an average finishing position of 11.94 in his 18 races at the track. Newman may not qualify up front Saturday but he should make his way to the top 10 at the end of the race Sunday night.

Erik Jones is a rookie and rule No. 1 at Darlington is to not take any rookies on your team. This rule does not apply to Jones because he is no regular rookie. This kid can driver and it will not take him long to figure out how to get around The Track Too Tough To Tame. Jones has all of the resources of his Toyota teammates. He has been one of the best drivers the last month and I see no reason why he should slow down any this week.

Dale Earnhardt Jr. is one my “banned” list this season. I have been burned by Earnhardt too many times this season and selecting him for any of my teams will be difficult. If you want to take a risk with Earnhardt, this is the week to do it. His stats at Darlington are pretty good. Earnhardt has the sixth-best average finishing position and the 9th-best average finishing position in the last two races at Darlington. He has three consecutive top-10 finishes at the track. Earnhardt is a risky pick that could pay off Sunday night.

Kasey Kahne is not the best driver at Darlington but he has the experience to finish in the top 10. Kahne qualified 18th and finished 7th in this race last year. He has also led laps in 6 of the last 9 races at the track. Kahne is a hard driver to trust but it may be worth a shot this week.

I will have my picks updated on my website (Fantasy Racing Tips) after qualifying Saturday.