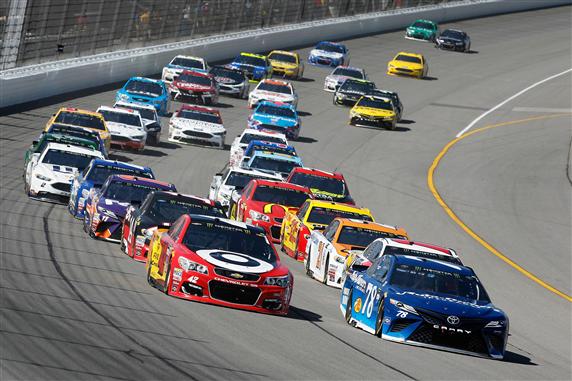 The Monster Energy NASCAR Cup Series travels to Brooklyn, Michigan this week for the Pure Michigan 400. The race can be seen Sunday at 3pm ET on NBC Sports Network.

The Monster Energy NASCAR Cup Series will be back to their regular schedule this week. There will be a practice Friday morning, qualifying Friday evening and two practices Saturday morning. I will have my final picks posted after the final practice Saturday along with my Garage Talk Notes.

The series competed at Michigan less than two months ago. It was a pretty clean race. There were only six caution flags. Three were for debris and three for spins. The race was dominated by Kyle Larson (96 laps led), Martin Truex Jr. (62 laps led) and Kyle Busch (40 laps led). I expect the same three drivers to be upfront Sunday.

You can see the highlights from race at Michigan here: Race Rewind Michigan

There were five drivers who finished each Stage in the top 10 and finished the race in the top 10 (Kyle Larson, Chase Elliott, Denny Hamlin, Martin Truex Jr. and Kyle Busch). These should be your core drivers this week.

Kyle Larson has to be the favorite to win Sunday. He has won both races on the 2-mile tracks this season (California and Michigan). Larson won the pole and led a series-high 96 laps on his way to Victory Lane at Michigan two months ago. The No. 42 car has won the pole for the last two races at the track. Larson has lost some of his mojo lately but a trip to Michigan is just what he needs to get back to Victory Lane.

Martin Truex Jr. has been the best driver this season and he shows no signs of slowing down any time soon. Truex had one of the strongest cars at Michigan in June. He qualified 2nd and led the second-most laps in the race. The No. 78 car has started two of the last three races at Michigan on the front row. This car has been so fast this season that it is impossible to bet against them right now.

Kyle Busch is quickly becoming a threat to Martin Truex Jr.’s championship season. The No. 18 car continues to lead more laps than the No. 78 car, but the team finds ways to beat themselves. Busch ran well in the first race at Michigan. He qualified 4th and led the third-most laps in the race. This is not the best track for Busch but he is running too well right now to ignore.

Matt Kenseth is a great pick to win this race. The Toyotas have the cars to beat and this is one of Kenseth’s best tracks. He has a series-high three wins at Michigan and 14 finishes in the top five. The No. 20 car qualified 9th and finished 11th in the first race at the track. Kenseth is running a lot better now than he was in June. He should easily finish in the top 10 Sunday.

Denny Hamlin may be on baby watch again this week. His wife is scheduled to go into labor any day now. Hamlin must be considered for your team if he is in the car Sunday. Hamlin qualified 5th, had a 6.49 average running position and finished 4th in the race. Toyota has found some more speed since the June race so I expect Hamlin to be in the top five again Sunday.

Chase Elliott is my sleeper pick to win this week. Everyone knows that Kyle Larson is the driver to beat at Michigan. Most people do not know that Elliott has a better average finishing position and a better driver rating at Michigan than Larson. Elliott has competed in three races at the track and he has finished all of them in second place. This will be Elliott’s best chance to go to Victory Lane before the playoffs begin.

Brad Keselowski is a Michigan native and winning at his home track is high on his priority list. The Blue Deuce could never get going in the June race at Michigan. Keselowski qualified 12th and finished 16th. Prior to the last race at the track Keselowski has six consecutive top-10 finishes at the track with an average finishing position of 5.5. He has led laps in seven of the last eight races at the track so I expect Keselowski to be up front this week.

Jamie McMurray is having a career season and it would not surprise me if he found his way to Victory Lane this season. McMurray has been very good at Michigan the last two seasons. He has an average finishing position of 7.3 since 2015. McMurray qualified 8th and finished 5th in the June race at the track. I expect similar results this week.

Daniel Suarez has been one of the biggest surprises this season. He is really running well now. Suarez has finished the last four races in the top seven with an average finishing position of 5.75. That is awesome for a rookie! He did not have his best race at Michigan in June but he has proven he can learn from his mistakes. I would not be surprised if he finishes in the top 10 again Sunday.

Eric Jones is a Michigan native. How cool would it be to see him win his first race at his home track? The Toyotas have all of the speed right now but Jones will have to beat his Toyota teammates if he wants to go to Victory Lane. Jones qualified 14th and finished 13th in his first race at Michigan. I expect the No. 77 car to have the same setup as the No. 78 car and finish in the top 10 Sunday.

Ryan Blaney was running in the top 10 in the first race at Michigan until he got a flat tire with only 10 laps to go. The Wood Brothers Racing Ford has had a lot of speed this season. I expect Blaney to qualify in the top five and finish in the top 10 this week.

Danica Patrick is running as well now as she has her entire career. Some people refuse to play her in Fantasy NASCAR, but you are really missing out on an opportunity to get a cheap driver who outperforms her price. Patrick has an average finishing position of 16.7 dating back to the race at Dover in May (not counting the superspeedway or road courses). She usually minds her own business and slowly makes her way inside the top 20. She will have value as long as she has a low price tag in salary cap games.

I will have my picks updated on my website (Fantasy Racing Tips) after the final practice Saturday.