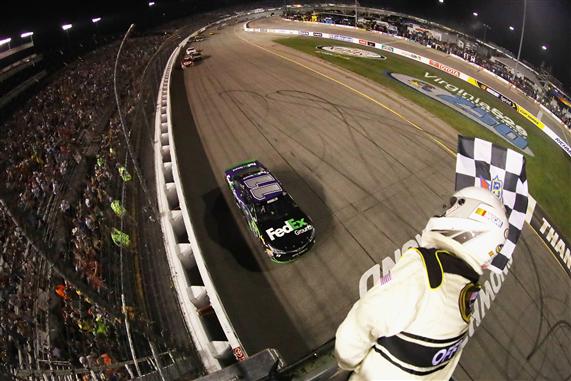 The Monster Energy NASCAR Cup Series travels to Richmond, Virginia this week for the Federated Auto Parts 400. The race can be seen Saturday night at 7:30pm ET on NBC Sports Network.

The race Saturday night is the final chance for teams to secure their spot on the playoffs. This tends to make the race more unpredictable than the spring race at Richmond. Joey Logano won the first race and he needs to win Saturday night if the No. 22 team wants to secure a playoff spot. Other drivers on the bubble include Jamie McMurray, Clint Bowyer, Erik Jones and Daniel Suarez. These drivers will be risky picks this week since they are likely to gamble to win the race.

You can see the highlights from spring race at Richmond here: Richmond Race Rewind

One thing to watch Saturday night is the commitment box painted on the track at the entrance to pit road. Many drivers were penalized in the first race because they drove over the box. I expect teams to practice getting on and off pit road in practice and pay more attention to the box so they do not get slapped with a pass-through penalty.

Denny Hamlin is a native of Virginia and all signs point to him going back to Victory Lane Saturday night. The No. 11 team will have momentum after winning the race at Darlington. Hamlin is also the defending race winner of the night race at Richmond in 2016. Hamlin has finished 8 of the last 11 races this summer in the top four. That is quite the hot streak. Hamlin is my pick to win Saturday night.

Kevin Harvick will have a car fast enough to win the pole and run up front Saturday night but the question is… Can the No. 4 team win the race? Harvick seems to be close to running with the Toyotas but his car lacks the speed to win the race. Harvick has finished three consecutive races at Richmond in the top five. I expect another top-five finish from Harvick this week.

Kyle Busch should be the biggest competition for Denny Hamlin for the win Saturday night. Busch has been hit or miss in his recent races at Richmond. The Joe Gibbs Racing Toyotas are running well right now so I expect Busch to be up front this week. It also helps that Busch needs to stay in front of Kyle Larson and finish second in the points to earn extra bonus points for the playoffs. Rowdy has four wins at Richmond and he could add another one Saturday night.

Martin Truex Jr. must be on the contender list at every track. I am concerned about Truex since he essentially has nothing to race for this week and Richmond is only his 14th-best racetrack. I would not be surprised to see the No. 78 team want to make a statement by winning another race before the playoffs begin. I recommend watching the practice times for Truex before you select him for your team this week (I would select drivers with more to race for in Yahoo Fantasy Auto Racing).

Kyle Larson ran very well in the spring race at Richmond. He led five laps and had the 6th-best average running position in the race. Larson qualified 2nd and finished 2nd at Richmond last year. He is another driver that cannot be counted out in any races this season. I will be watching him in practice and if the No. 42 car looks fast I will use Larson in the Fantasy Live and DraftKings games this week. I am saving his allocations for better tracks in the Yahoo Fantasy Auto Racing game.

Matt Kenseth does not need to win the race to make the playoffs but it would not surprise me if he did find his way to Victory Lane Saturday night. Kenseth has the best driver ranking at Richmond in the last five races at the track. He has also led the most laps. The problem is that he finds trouble at the end of the race. The No. 20 team may play it safe this week and take the points to ensure they make the playoffs. I expect Kenseth to easily finish in the top 10 Saturday night.

Kurt Busch is starting to heat up at the right time of the season. His average finishing position in the last four races is 6.25, including two consecutive top-five finishes. Busch has been very good at Richmond too. He has finished five of his last six races at the track in the top 10, including a trip to Victory Lane in 2015. I expect Busch to keep his momentum going and finish in the top 10 again this week.

Jamie McMurray is in the transfer spot for the playoffs so he needs a good run Saturday night. McMurray ran a lot better earlier in the season than he has been running since the pressure of the playoffs has hit the team. McMurray finished sixth in the spring race at Richmond and seventh in the night race in 2016. Another top-10 finish should lock up his playoff spot as long as a driver behind him in the standings does not win the race. McMurray is a risky pick this week but I expect the team to overcome the pressure and finish in the top 10 Saturday night.

Ryan Newman is running as well now as he has all season. Newman finished 4th at Michigan, 6th at Bristol and 7th at Darlington. He does not always qualify well but he finds his way to the front at the end of the races. Newman qualified 13th, led 25 laps and finished seventh in the spring race at Richmond. I expect another good run from the No. 31 team this week.

Daniel Suarez is in a win or bust situation this week. He is far enough out of the playoffs that he must win the race Saturday night in order to make the playoffs. That makes him a risky pick. The No. 19 team was very good at Richmond when Carl Edwards was behind the wheel and Suarez ran well in his first race at the track. Suarez qualified 12th and finished 11th. He is a quick learner so I expect him to improve and finish in the top 10 Saturday night.

I will have my picks updated on my website (Fantasy Racing Tips) after qualifying Friday.