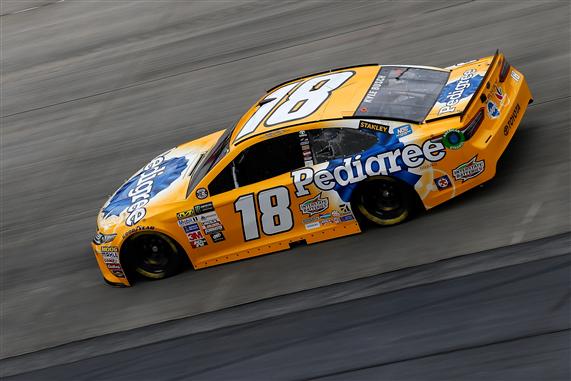 The Monster Energy NASCAR Cup Series travels to Sparta, Kentucky this week for the Quaker State 400. The series will be competing on a 1.5-mile oval this week after a visit to the road course and the Superspeedway. Finally we can get back to normal with our fantasy NASCAR picks. Be sure to test your knowledge of NASCAR by competing in the Fox Sports Fantasy Auto Racing.

Kentucky was repaved in 2016 and the new track is smooth and fast. The jury is still out as to if the racing will be any better on the new surface. The Monster Energy NASCAR Cup Series conducted a tire test at Kentucky in May. Jamie McMurray, Austin Dillon, Kurt Busch and Erik Jones participated in the tire test. Goodyear announced they will bring the same tire used in the test so these drivers should unload with a lot of speed when the haulers show up at the track.

Track position will be important at Kentucky. Clean air has been king so far this season, so being out front will increase a driver’s chances of winning the race. The scoring system for the Fox Sports Fantasy Auto Racing game rewards drivers who improve their position in the race more than the drivers who lead the most laps. Selecting the drivers who start outside the top five but inside the top 25 will give your team the best chance to score position differential points Saturday night.

Kyle Busch ($12,200) is the best driver who has yet to get to Victory Lane in 2017. That should change this week. Busch has won two of the six races at Kentucky. He has also finished three of his last four races at the track in the top five. Busch is a safe pick because he has never finished worse than 12th at Kentucky. Busch has led 162 laps in the last three large oval races (Kansas, Charlotte and Michigan). He also has an average finishing position of 4.5 in those races. Busch will finally get to take a bow in Victory Lane this week.

Kevin Harvick ($12,000) is always fast on the 1.5-mile tracks and that should not change at Kentucky. He has finished four consecutive races at the track in the top 10. Harvick won the pole, led a series-high 128 laps and finished ninth. The No. 4 team started the season slow but they are final adjusting to the new Ford chassis. Harvick should easily finish in the top 5 this week.

Kyle Larson ($11,500) has been very good at every track this season. He has finished five of the seven races on large ovals this season in the top two, with wins at California and Michigan. Larson has also led 213 laps in these races. His best finish at Kentucky is 19th, but Larson has been running very well in the new aero-dynamics package that the Cup Series is using this season. The No. 42 car will be up front at the end of the race Saturday night.

Brad Keselowski ($11,200) has been the most dominant driver at Kentucky. There have been six races at the track and Keselowski has won half of them. Keselowski has also led a series-high 483 laps at the track. The No. 2 car has run well on the 1.5-mile tracks this season. Keselowski won at Atlanta and finished in the top five at Las Vegas and Kansas. He should add another top-five finish to his resume this week.

Matt Kenseth ($11,200) is still looking for his first win this season and he will have a good chance to get to Victory Lane Saturday night. Kenseth won the race at Kentucky in 2013 and he has never finished outside the top eight at the track. Kenseth may need a win to make the playoffs this season so I expect the No. 20 team to bring their best car to the track this week.

Martin Truex Jr. ($10,100) is the best driver in the sport when it comes to 1.5-mile tracks. His average finishing position on these tracks this season is 4.2. That includes wins at Las Vegas and Kansas. Truex has led a series-high 609 laps in these races this season. His stats at Kentucky are not great but I would not bet against the No. 78 car winning the race Saturday night.

Austin Dillon ($8,100) is one of the drivers who tested at Kentucky so the team should unload from the hauler with a fast car this week. Dillon is starting to show some speed after a slow start to the season. The switch from Slugger Labbe to Justin Alexander seems to be paying off. Dillon won the race at Charlotte and should finish in the top 10 Saturday night.

Erik Jones ($7,500) is another driver who will be helped this week by the knowledge he gained in the tire test at Kentucky. Jones has never competed in a Monster Energy NASCAR Cup Series race at Kentucky but he has three finishes in the top 10 in the Xfinity Series at the track. Jones will have the car and the talent to finish in the top 10 Saturday night.

Daniel Suarez ($7,300) may be the most underrated driver on the track this season. He has top-10 finishes at California, Kansas and Dover. Suarez has never competed in a Monster Energy NASCAR Cup Series race at Kentucky but he has four races at the track on his Xfinity Series resume. Suarez finished three of the four races in the top four. He is a good value pick this week.

Ryan Blaney ($6,800) has been one of the most consistent drivers on the large ovals this season. He has top-10 finishes Las Vegas, California and Kansas. Blaney won the race at Pocono and the horsepower the Wood Brothers Racing Ford had in that race should translate into a lot of speed this week. Blaney is a good pick for your fantasy team this week.

Here are my pre-qualifying picks for the Quaker State 400: