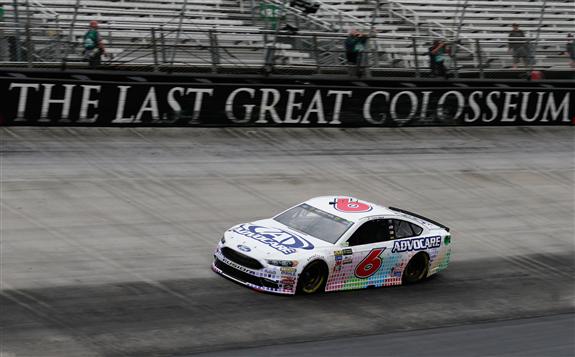 The Monster Energy NASCAR Cup Series cars practiced for the final time at Bristol Motor Speedway Saturday. Cars turn laps in Thunder Valley faster than any other track on the circuit. Most teams will run over 100 laps in the practice sessions this weekend. It will be important to focus on which teams have the best cars on the long runs.

– Bristol Motor Speedway worked hard this week to get the track ready for the Xfinity Series and the Monster Energy NASCAR Cup Series. They put a sticky compound at the bottom of the track to give the track a preferred grove. Hopefully the rain will stay away this week and the cars can lay enough rubber on the track to expand the groove to the top of the track.

– Qualifying was rained out Friday so the starting lineup was set by the rule book.

– Cars will start the race on new tires since qualifying was rained out.

– Ricky Stenhouse Jr. backed his car into the wall in the morning practice Saturday. He will go to a backup car.

– Kyle Larson was the first driver to run the top of the track in the morning practice Saturday. It turned out to be a bad idea. He spun out but it looked like the No. 42 car only had cosmetic damage.

Chase Elliott: He said the car is very consistent. Elliott knows what the car is going to do and it is very drivable. The No. 24 car is happy with their car.

Jimmie Johnson: Jimmie and Chad Knaus were happy with the car. They worked on long runs and fine tuning the car in practice. He was 4th fastest after his first run.

Dale Earnhardt Jr.: He was complaining the car was chattering the tires. After a long run Earnhardt said, “I am about to wreck on every lap. I don’t know… we have more work to do.” At the end of practice Earnhardt said, “Finally!!! I like this change a lot.”

Kasey Kahne: The No. 5 team was pretty happy with their car. They went out to make a long run to shake it down and see how the tires would wear.

Kevin Harvick: Once again it was a quiet practice for Harvick. They did not work on overall speed but drivability. They want a car that does not fall off on the long runs.

Clint Bowyer: After a long run Bowyer said, “Were dialed in boys!”

Kurt Busch: He said the car is a little tight. Busch thinks the track is close to where it was when he won five races. Overall Busch thought his car was close.

Kyle Larson: The No. 42 car just had cosmetic damage after the morning practice. The team worked on a long run in final practice. Larson said the car is perfect at the bottom. He was upset no one would run with him at the top. The team parked their car with 25 minutes left in practice and smiled at his crew chief. He definitely has a great car this week.

Jamie McMurray: Working on a loose car. Team asked his to run the top to help Larson work in the groove. McMurray said, “I will let him be the hero!”

Brad Keselowski: The No. 2 team started practice on scuff tires and ran 23 lap run. They brought it in to make adjustments and put new tires on it. Brad asked, “Who looks good?” Crew Chief Paul Wolfe told him, “Kyle Larson.” Brad said, “Damn that kid is turning into a badass!!!”

Joey Logano: After Logano kissed the wall in Friday’s practice the team worked to tighten up the car. He was 11th fastest after a long run. They were pretty happy with their car.

Ryan Blaney: His car starts off loose but gets faster as they get deeper into a run. He said the car needs some work.

Kyle Busch: Busch made a long run and he told the team, “I really do not know what we can do to make it better. We need to avoid over adjusting and killing what we have know.” The team was happy with their car. Adam Stevens told Kyle, “You are the best at the bottom of the track.”

Matt Kenseth: The No. 20 car was working on long runs. The needed more speed on the exit out of the corners but felt the car was pretty good.

Denny Hamlin: Was having problem with the throttle. When he smashed the gas it did not release when he took his foot off the gas pedal. They worked on it and put a toe-strap on his foot so he could pull it back. After a long run, Hamlin said the car is hitting the splitter. They needed some work.

Daniel Suarez: They started the practice with a long run to get Suarez more comfortable. He was fastest at the start of practice.

Martin Truex Jr.: He was consistently fast all weekend. Truex was not at the top of the speed chart like his teammate (Erik Jones) but he was in the top 10 in every practice. Truex may be a good sleeper pick this week.

Erik Jones: The No. 77 team thinks they have the car to beat this week. That is a bold statement from a rookie with no experience, but they have been fast all weekend.

Austin Dillon: He said he found something in the Xfinity practice that he wanted to try in the Cup Series car. They made adjustments and Dillon said the car is much better.

Ryan Newman: Newman said, “We hit the balance perfectly this weekly.” The car gets into the corner well and exits pretty good too.

Paul Menard: He said the car is pretty fee entering the corner but it is very drivable.

Ty Dillon: It was a quiet practice for Dillon today. He ran consistently in the top 25. Hopefully Dillon can learn something in the Xfinity Series race to help him on Sunday (or whenever they race). Dillon worked the top of the track at the end of practice.

AJ Allmendinger: The No. 47 car will be a good sleeper pick this week. Allmendinger was in the top 10 in the morning practice and ran most of Happy Hour Practice in the top 15. He is usually good at out-braking the competition at Bristol.

Chris Buescher: The No. 37 car tried to work in the top of the track and he hit the wall. The back of his car is smashed. The team was rolling out the backup car.

Trevor Bayne: The car was a little tight exiting the corner. Bayne was 9th fastest after his first run.

Ricky Stenhouse Jr.: The No. 17 team worked to fix their primary car after they wrecked it in the morning practice. They did not want to lose their starting position. They went out on the track and made 5 laps. Stenhouse said the car was terrible.

Aric Almirola: The No. 43 car was not great but he never is in practice. Almirola should finish around the top 20 this week.

Landon Cassill: The No. 34 car was one of the best of the lower-funded teams. Cassill was 25th fastest in the morning practice and improved to 12th fastest in Happy Hour Practice. Cassill has had some success at Bristol in his career.

David Ragan: “Too tight….way too tight!!”

Michael McDowell: Made a 42 lap run and the team was working on the balance of the car.

Matthew Dibenedeto: He said his car is horrible compared to last year. The team thinks they completely missed the setup this week. They are working on it.

Here are the speeds for the final practice session: Bristol Practice Speeds