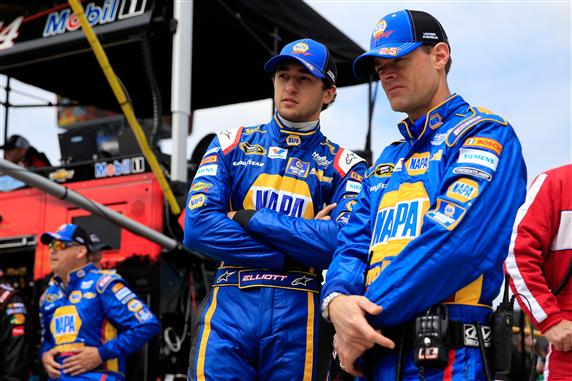 The Monster Energy NASCAR Cup Series cars practiced for the final time at Dover Saturday. There was one practice held Friday and two practices on Saturday. Qualifying was held Friday evening and most of the cars in the Friday practice worked on their qualifying setup. The teams worked on their race setups in the two practices Saturday so we should have a good idea which drivers have the fast cars for Sunday.

Goodyear will be using a new tire this week. It will be a completely different tire from what they used in the June race. Chris Buescher, Landon Cassill, Dale Earnhardt Jr., Matt Kenseth and Joey Logano participated in a tire test at Dover in July. The same tire used in the test will be used Sunday.

Austin Dillon, Ty Dillon, Dniel Suarez, Erik Jones and Ryan Blaney will compete in both the Xfinity Series and MENCS races this week. They will have an advantage because they will get to see how the new tire falls off in the race.

Michael McDowell was hit with a penalty for final practice. The No. 95 team was unable to practice and McDowell had to sit in the car on pit road so the team could not work on it. It is the same penalty that Joey Logano was hit with last week.

Chase Elliott: Chase was a little loose in the morning practice. They made a lot of adjustments between the practices. Chase made 2 long runs and half-way through practice Chase had the fastest time on the 5-lap, 10-lap and 15-lap speed chart. The car looks pretty good. Elliott has never finished worse than 5th at Dover.

Jimmie Johnson: Jimmie spent half of the morning practice on top of the pit box watching the drivers turn laps at Dover. He was listening to see where they were lifting off the throttle and when they got back in the gas pedal. Jimmie started practice with a 5 lap run. He said, “We are a tick too free.”

Dale Earnhardt Jr.: Junior said after qualifying, “This is the best car we have had all season.” He qualified 7th. Dover is the best track for Hendrick Motorsports. He had to serve a 30 minute penalty in final practice. Junior made a long run and told the team, “Damn man this thing is bad fast. We have been fast since it came off the truck. Good job guys!”

Kasey Kahne: Kasey made 3 runs in practice and told the team, “Though the center was alright, the exit feels much better.”

Kevin Harvick: After his 1st run Rodney Childers told Kevin, “It looked really good.” Kevin replied, “It felt really good. We are very close to where we need to be.” Kevin was fastest in the morning practice.

Clint Bowyer: Clint spent the 1st half of the morning practice working on his pit road speed and getting in and out of his box. Dover is the hardest pit road on the schedule. Clint started practice making a long run. His crew chief (let’s call him Mike Buga) told him, “We have decent speed and I know we have more laps on our tires than the other cars.”

Kurt Busch: Kurt made two runs to start practice. The team made some adjustments and Kurt said, “We disconnected the corner too much. It was a good exercise but I think we need to put it back to where it was.”

Danica Patrick: Danica started 31st and finished 10th in the June race at Dover. She will look for a repeat performance Sunday. She made a long run to start practice and she said, “We are loose in, loose off and loose in the center! It is awful!” The team made some adjustments. Danica went back out and said, “It is still really harsh in turn 3.”

Kyle Larson: Kyle served his 30 minute penalty in final practice. His lap times did not show how fast his car was because he did not have a clean track to practice on and they were on scuff tires.

Jamie McMurray: Jamie said the No. 1 team completely missed the setup in qualifying. They failed to advance pass the first round and will start 26th. McMurray was a lot faster in race trim. He is a good candidate to score position differential points this week. Jamie made a lot of long runs in the morning practice and the car was “too bouncy.” They made a shock adjustment between practices and it was “a lot better.” NBCSports said Jamie told the team, “I do not know what you did to the car over night but it is a completely different car. It is near perfect.”

Brad Keselowski: The No. 2 team worked on their long run speed in final practice. Brad though the balance of the car was pretty good. The likely plan for the No. 2 team is to gamble to get track position and win Stage points. Keselowski is already locked into the Round of 12 on points. This team loves to gamble and they are good at it.

Joey Logano: Joey tried a couple of setups to help the No. 2 and No. 21 teams. His crew chief debriefed with the other crew chiefs after practice and then Joey worked on his car in final practice. Joey was a little loose on his long runs but he was happy with the car. Todd Gordon told MRN after practice, “We are getting better. I’m not sure if we are good enough to compete for the win but we can definitely complete for a top 5.”

Ryan Blaney: Ryan broke a brake rotor in Friday’s practice. They also had damage to the splitter. The team fixed the damage and Blaney qualified 11th.

Kyle Busch: Kyle was looking for his 9th pole of the season Friday. He won the first two rounds of qualifying but got a little loose in turn three in the final round. Busch will start 2nd in one of the fastest cars this weekend. Kyle made a long run and the team told him that his car is one of the fastest. Kyle asked, “How do we compare to the No. 78?” They told him, “You look better.”

Matt Kenseth: Matt served his 30 minute penalty in final practice. His lap times did not show how fast his car was because he did not have a clean track to practice on and they were on scuff tires.

Denny Hamlin: Denny made a long run to start practice. He said, “The car is pretty good. We just need a little extra bite out of the corner.” The Toyota’s look good this week. On his last run Hamlin had problems getting through turns 3 and 4. He said it was too bumpy.

Daniel Suarez: This is the best track for Suarez. He qualified in the top 10 and his car is good on the long runs. After his first run in practice Suarez said, “It is a little bouncy in turn 3 but nothing I cannot control. It feels pretty good.”

Martin Truex Jr.: The No. 78 car was not happy with their car in the morning practice. They brought the same setup they had in June and it did not work. They made big changes to the car between the practice sessions. MRN radio (Alex Hayden) asked car chief Joe Marone how their car is. Marone said, “We were not good to start but we have it figured out now. We will be good Sunday.”

Erik Jones: Erik started practice with a completely different setup as his teammate (Martin Truex Jr.). His car was pretty good on the ling runs. Erik wanted to try a setup he learned in the Xfinity Series practice and it made the car too tight so they put it back to the way it was.

Ryan Newman: Ryan made a long run and he said, “The balance is good. All we need is help with the bumps in turn three.” The team really worked hard to get the car to run well at the top and the bottom this week. Newman felt the car was better at the top but needed more work at the top.

Austin Dillon: Austin started the morning practice with a long run and said, “It is way too bouncy.” The team made shock adjustment between practice sessions. Austin made a long run and told the team, “It is still loose but every adjustment makes the car better.” His crew chief told him to bring it in and they will give him some more of what they did.

Paul Menard: Paul told the team after his 1st run, “Its better over the bumps. It’s getting loose on landing and a bit on the exit.”

Ty Dillon: Ty told his team after his 1st run, “The splitter is hitting the track when I get on the brakes.” Bootie Barker raised the nose a bit and sent Ty back on the track. They told him, “Things look good now.”

AJ Allmendinger: AJ made a long run and said, “We are a little on the free side and need more forward bite.” Allmendinger qualified 28th and practiced around the 18th position.

Chris Buescher: Chris made a long run and said, “The car has good drive off the corner but not as good across the center.” The team brought him in for adjustments.

Trevor Bayne: Trevor struggled with the car hitting the splitter on the track in the morning practice. They made a lot of changes and Trevor was 14th fastest after his first run in the final practice.

Ricky Stenhouse Jr.: “Too loose on landing” was the problem with the No. 17 car. The team brought Ricky in to make some adjustments.

Aric Almirola: Aric told his team, “It is more tight than loose.” The team brought him in for some adjustments. Tight is slow, loose is fast, so they need to find more speed.

Landon Cassill: Landon made a series of long runs. On his last run in practice he said, “I thought it turned a little better.” His crew chief told him, “I think we will be fine.”

David Ragan: David liked his car today. He said, “The balance is right where we need it to be.” They made another run and David said, “It is skating around a little bit on the exit but overall I am happy with it.”

Michael McDowell: Michael was not allowed to practice in Happy Hour because of penalties in tech inspection. In the morning practice Michael said, “It feels like it is dragging the left front and the tow is off a little bit.”