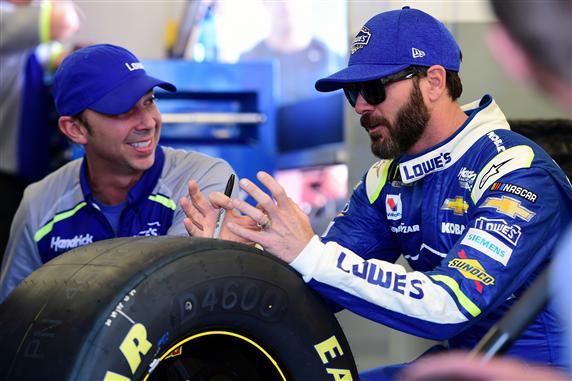 The Monster Energy NASCAR Cup Series cars practiced for the final time at Dover International Speedway Saturday. This is the last chance for teams to get their cars dialed in for the AAA 400 Drive for Autism race. There were a handful of drivers who stood out in practice.

The weather was mostly cloudy and 67 degrees. The weather for the race tomorrow is forecast to be partly cloudy and 80 degrees. This track is not as heat sensitive as asphalt tracks but a 15 degree temperature change should affect the way the cars drive. I am not putting a lot of stock into this practice.

Many of the teams practiced getting on and off pit road in the morning practice. Jimmie Johnson had a lot of problems. His team informed him that he was speeding twice and one time Jimmie missed pit road. It is good they are getting this worked out now.

Chase Elliott: Chase said the car was too edgy. The car felt like it was going to spin out if Chase drove it too hard. They brought him in to try and tighten him up.

Jimmie Johnson: Jimmie is probably the most confident driver in the garage. He was fastest after his first run. Jimmie did not like the way the car drove compared to the morning practice. They made a shock change. Jimmie said, “It gets over the bumps really well now.”

Dale Earnhardt Jr.: Junior said, “It is loose out of the corner. It is hard to get back to the throttle.” Earnhardt said there was a humming in the tire. Greg Ives told Junior they may have went too far on the air pressure adjustments.

Kasey Kahne: Kasey said the car was getting tighter the longer they got into the run.

Kevin Harvick: Kevin thought he had problems with the engine in the morning practice but it was only a lose plug wire. He was very fast in Happy Hour practice.

Clint Bowyer: Bowyer said, “I’m too throttle tight out of the corner but everywhere else it is balanced.” I’m not sure what that means but it looks like Clint has a car he can work with this weekend. Bowyer made a 17 lap run and said it started off good but got too loose at the end of the run.

Kurt Busch: Kurt is looking like a great sleeper pick for the win Sunday. Crew Chief Tony Gibson said the car is very good this week. Kurt was 2nd-fastest after his first run. Kurt started to run the middle lane and he really liked the balance of the car in that part of the track.
Kyle Larson: Kyle was running the high line and diving into the bottom of the track in the corners. He was making fast laps. He was fastest midway through practice. They were comparing their car to Truex. Larson had a very good car on the long runs. The team changed the brakes and sent Larson out for a long run.

Jamie McMurray: Jamie liked the balance of his car. He said, “It is a little free in turn three.” The team was working on long run speed.

Brad Keselowski: Both of the Team Penske Racing cars were lacking speed. Keselowski was 14th-fastest after a long run. They made a shock adjustment to the Blue Deuce. Brad worked on getting on and off of pit road and failed. He missed the entrance twice.

Joey Logano: The No. 22 car completely missed the setup in qualifying. On Saturday Joey had a big smile on his face. Logano told MRN radio, “We will be good Sunday.” Although Logano said he liked his car the team only made 4 and 5 lap runs. That is not a good sign.

Ryan Blaney: Ryan was a lot better in the morning practice than this practice session. The No. 21 team was working on long run speed. They used all of their tires in the two previous practice sessions so they were on scuffs in this session. Blaney told MRN radio that he learned a lot in the Xfinity Series car.

Kyle Busch: Kyle was one of the first cars on track. He immediately went to the top of the speed chart. He has spent a lot of time there this weekend. After a 17 lap run the No. 18 team was working on “fine tuning” the car.

Matt Kenseth: Matt really like the balance of his car. Matt worked on getting in and off of pit road. After his last long run Matt said, “Well it feels pretty sporty”

Denny Hamlin: The car was too tight. They brought Denny in for adjustments and he said, “It still too tight. I can barely drive it.”

Daniel Suarez: Daniel was 6th-fastest after his first run. The team was working on long runs. They sent the No. 19 car out to follow Matt Kenseth.

Martin Truex Jr.: The No. 78 car looks like the car to beat. Truex was one of the first cars on the track. They were working on long runs and getting on and off pit road. He was 4th fastest.

Erik Jones: After spinning out in the morning practice Erik said the car was a lot better in this practice session. The No. 77 team is working closely with the No. 78 team this week.

Austin Dillon: Austin said, “It is pretty close everywhere but turn three. It bounces too much and is a handful.”

Ryan Newman: Ryan said the handling was better in this practice. The team is still searching for more speed.

Paul Menard: Paul did not like his car early in practice. He thought the team over-adjusted the car between the practice sessions. The car was too tight.

Ty Dillon: The car was bouncing too much in turn three. The team sent Ty out for a long run and he said the car was still too lose.

AJ Allmendinger: AJ thought the team made a lot of gains between practice sessions. He said, “It is tight in the center but not bad getting out of the corner.”

Chris Buescher: The back of the car was loose on exit of turns three and four. Buescher said, “We are close.”

Trevor Bayne: Trevor said the car was too bouncy and lacking speed.

Ricky Stenhouse Jr.: After his first run Ricky said, “Wow, the car is completely different this session. It may be the sun.” The team brought the No. 17 Ford into the garage to tighten him up.

Regan Smith: Regan thought the car was horrible over the bumps. The team brought him in for a shock change. After his final run Regan said, “It is getting into the track a lot better.”

Landon Cassill: The No. 34 car was too loose.

David Ragan: David was dealing with a tight car. The team was working to free him up. After his final run Ragan said, “I doubt we can make it any better.”

Michael McDowell: Michael thought the car was much better in this practice. He said, “It is a little free but a lot better. Just keep going in the same direction.”

Here are the speeds for the final practice session: Dover Practice Speeds