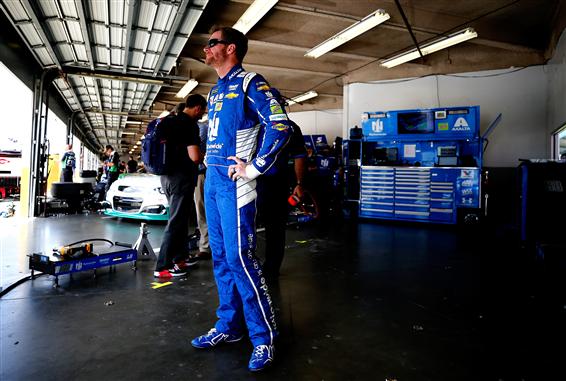 The Monster Energy NASCAR Cup Series cars practiced for the final time at Indianapolis Saturday. The series had two practices Saturday and then qualifying Saturday evening. NASCAR continues to condense the schedule. Next week they will race and qualify on the same day. I am not a big fan of that idea.

The weather was partly cloudy and 84 degrees at practice today. Race temperature for Sunday is forecasted to be mostly cloudy and 88 degrees. So the conditions for the race should be similar to what we seen in practice Saturday.

There will be no tire dragon or grip strip added to the surface this week. Indianapolis Motor Speedway did not like the idea of NASCAR adding any substances to their sacred surface.

Toyotas and Chevys seem to have the momentum and speed going into this weekend. Ford has not won at Indianapolis since 1999 (Dale Jarrett).

Kyle Busch and Austin Dillon had a 15-minute penalty for Final Practice for failing pre-race inspection at New Hampshire.

Chase Elliott: Chase started practice in race trim. He made a 7-lap run and said, “Not bad, not bad. A little free on exit and need some help getting into 3.” Chase was 12th fastest in race trim and 5 cars in front of him on the speed chart were in qualifying trim. The team was working on the “insecurity of the car.”

Jimmie Johnson: The No. 48 team had a quiet practice. The car was not bad but needed a little more speed. Jimmie started Final Practice in race trim. He made an 8-lap run and said it was a little loose (Jimmie likes a loose racecar). Chad Knaus tightened the car up and Jimmie said, “We could use a little more of whatever that was.”

Dale Earnhardt Jr.: Junior went out and made a 5-lap run and he was 3rd fastest. He said, “The car is still tight but it is not going to get perfect at this track. Let’s just try to make it the best we can and I will deal with it.”

Kasey Kahne: After a short run Kahne said, “It is pretty good. It is tight in turn 3 but freer everywhere else, especially on the exit.” Kahne made a long run and said, “I am all over the place in the corners and tight getting out of the corners. It is going to be hard to make passes the way it drives now.”

Kevin Harvick: Kevin started practice in race trim. He made an 8-lap run and Rodney Childers told Kevin, “You and the No. 20 car are the two best on the long runs. Bring it in and we will work on the qualifying package.” Harvick will had Steve Barkdoll fill in for Tim Fedewa as his spotter for practice because Fedawa dropped his sandwich on the track and NASCAR took his hard card away. Harvick was 2nd fastest in qualifying trim.

Clint Bowyer: In the morning practice Clint said, “The car is so snappy loose that I cannot even complete 1 lap.” The team made some big adjustments between practices. Clint started practice in race trim and said “It is still too loose.” The team put the qualifying trim in the car and it was still too loose. They will debrief with the No. 4 team after practice.

Kurt Busch: Kurt started practice in race trim. The car was way too tight. They had the same problem in the morning practice. The No. 41 team continued to try and loosen up the car. Kurt went back on the track for a long run and said, “Much better. Is this what the 4 has in it?” The team responded, “Yes”.

Danica Patrick: Danica made a long run and said, “It over rotates and the left-side doesn’t feel like it is down into the track.” The team made some adjustments and Danica seemed to like the car. She was 20th fastest at the time.

Jamie McMurray: The No. 1 car started practice in race trim. They had the same setup in the car as the No. 42 car. Jamie was 9th fastest after a long run, but four cars ahead of him on the speed chart were in qualifying trim.

Brad Keselowski: The No. 2 car was in race trim. They were working on the balance of the car. Keselowski was too tight for most of the practice. He was 18th on the speed chart but 5 cars were in qualifying trim.

Joey Logano: Joey was having a hard time with the car bouncing on the splitter. The No. 22 team started practice in race trim. They said they have too much work to do to get the car dialed in to worry about qualifying trim.

Ryan Blaney: The Wood Brothers put the qualifying setup in the car to start practice and Blaney went to the top of the speed chart. Blaney has been one of the best at qualifying this season and he won at Pocono. Usually speed at Pocono translates into speed at Indianapolis.

Kyle Busch: In the morning practice Kyle said, “This car is horrible.” The team brought the setup used from the practice in April. Kyle wanted the setup used in last year’s race to be put into the car (He won last year). So the team made the changes between the practice sessions. Kyle was in qualifying trim for Final Practice. He said, “Just too tight. I need more front steer.” I am sure the no. 18 team will be fine. Kyle was 12th fastest in race trim and 7 cars in front of him were in qualifying trim.

Matt Kenseth: The No. 20 car was fast in practice. The Stewart-Haas Racing teams were talking about the speed of the No. 20 and No. 78 cars. They felt Kenseth was one of the cars to beat this week. Kenseth worked in race trim for most of the practice.

Denny Hamlin: Hamlin was the only car in qualifying trim in the morning practice. The No. 11 team wanted to work on race setup in the Final Practice since temperatures will be closer to what it will be Sunday. Hamlin spent the Final Practice in race trim. He liked his car. The No. 11 is one of the best on the long runs.

Daniel Suarez: Daniel worked on his race trim package for most of the practice. This is what the team usually does to get him more experience on the track. Daniel was 12th fastest in race trim but 5 cars in front of him were in qualifying trim. Daniel has run well at Indianapolis in the Xfinity Series.

Martin Truex Jr.: Truex had the best car in the morning practice (best in race trim) and he had a fast car in final practice. Truex was first on the track and he said, “It is really on the splitter but I can feel the speed in the car.”

Ryan Newman: The No. 31 team started practice in qualifying trim and Ryan went to the top of the speed chart. When Ryan was bringing the car back to the garage he said, “We need to find a way to get this speed into our race package.” Newman has won this race before.

Austin Dillon: Austin was fighting the car getting onto the splitter and making the car tight in the morning practice. The team made a shock change between practices. After a 5-lap run to start practice Austin said, “It is still too tight.”

Paul Menard: Paul went out and made a 4-lap run to start practice. He said, “It has good speed entering the corner but we need some help on the exit.” This is Menards best track.

Ty Dillon: Ty said the car was good on entry and center of the corner but he needed help with drive out of the corner. Ty made a long run and said, “The car starts off tight on sticker tires and gets freer as the tires wear down.”

AJ Allmendinger: AJ said the car was “Sliding on the splitter through the turns.” After a long run AJ said, “It is massive tight.”

Trevor Bayne: Bayne started Final Practice in qualifying trim. He was 16th fastest after two runs. The team was working on getting the car to turn through the corners.

Ricky Stenhouse Jr.: Ricky started practice in race trim. He made an 8-lap run and said, “Need to work on the splitter. It just feels bouncy.” He was 18th fastest at the time.

Aric Almirola: The car was unbalanced. It was free in turns 1 and 2 and loose into turns 3 and 4. Aric was on a long run in Final Practice and he had a rear right tire going doing. He brought the car to the garage.

Landon Cassill: Landon seemed to like his car. He said it was “a little free but manageable.” Landon was 30th fastest at the time.

David Ragan: David said in the morning practice, “The stuff we learned in the test session are really paying off today.”

Michael McDowell: The team was having problems making the car rotate through the corners so they made a right shock change. Michael said, “That is much better.”

JJ Yeley: The car was too tight in the corners. They changed shocks between practices and continue to work to get more speed out of the No. 7 car. After a 4-lap run to begin practice JJ said, “It is plowing tight.”