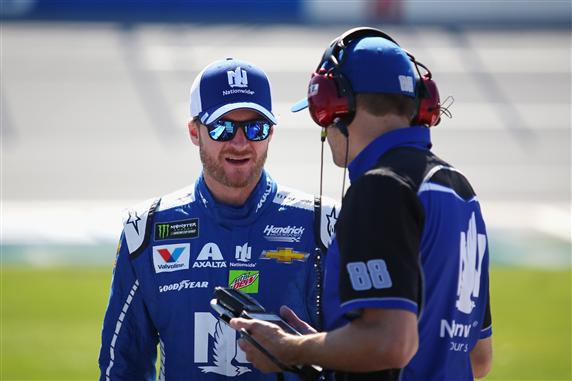 The Monster Energy NASCAR Cup Series cars practiced for the final time at Michigan International Speedway Friday. The track at Michigan has been lightning fast. Qualifying times were over 200 MPH and the race speed should be blistering fast as well. The drivers who can turn laps with a nearly wide open throttle will be up front Sunday.

The weather was partly cloudy and 81 degrees at practice today. The weather for the race Sunday is forecast to be the same with rain Sunday morning. That means the track conditions should be the same so these speeds should translate into race speed, but the rain should wash the rubber off the track.

Teams were given four sets of tires for the two practices and qualifying. Most teams had one set of tires left for this practice. The common theme was to start the Final Practice on scuff tires and change to the fresh tires for a long run to end practice.

There was a practice this morning at Michigan. The top five speeds were 1. Martin Truex Jr., 2. Kyle Busch, 3. Jimmie Johnson, 4. Ryan Blaney and 5. Kevin Harvick. The track temperature will be a lot different for the race Sunday so I would not put a lot of emphasis on the morning practice.

Jimmie Johnson spun out in the morning practice. The team will go to a backup car and start last. Four of his last five wins have come when Jimmie started last, so do not count him out. He will be scored for the 13th starting position in Fantasy NASCAR games.

Daniel Suarez will start in the rear on Sunday because of a tire change in qualifying.

AJ Allmendinger crashed his car. He will go to a backup car and start at the rear of the field Sunday. He will be scored from the 25th starting spot in Fantasy NASCAR.

Chase Elliott: At the beginning of practice Chase said the car is not where it needs to be. They are going to make long runs to free it up. The team made “wholesale” changes. The team continued to search for the speed that he had last year at Michigan. He was 15th fastest.

Jimmie Johnson: Jimmie will start from the back of the field because the team went to a backup car. The No. 48 car finally made it on track 20 minutes into practice. Jimmie said, “It is hitting the splitter and loose off the corner.” He was 20th fastest after his first run.

Dale Earnhardt Jr.: Junior likes his car this week. He said the balance is pretty good. He was 12th fastest after his first long run. Junior said, “It feels great. It has a lot of speed.” Junior practiced getting on and off pit road. He rarely does this so that is a good sign for the No. 88 team.

Kasey Kahne: Kasey started practice with a 16 lap run. Kasey said, “It started off loose but got tighter deeper in the run. Not bad.” Kahne made a second long run and said, “It feels comfortable but it is lacking some speed.”

Kevin Harvick: Kevin started practice on scuff tires. He made a 14 lap run and was 9th fastest. The team brought him in to tighten up the No. 4 car. The team is very happy with their car. They said it is as good as what they have ever had at Michigan. Winston Kelly from MRN radio said he was in the pits of the No. 4 team and he thinks the team is sandbagging because they have a new set of tires but refuse to use them.

Clint Bowyer: After a long run Clint said the car is loose into the corner and tight out of the corner. They brought him in for some adjustments. The No. 14 car went back out and move to 5th fastest in practice. Clint ran 20 laps and said the car starts off good but looses grip. He thinks the car is junk at the end of the run.

Kurt Busch: Kurt went out for a long run and said the car was too loose off the corners. They brought him in for adjustments. He was 18th fastest at the time.

Kyle Larson: Larson likes his car. The No. 42 was one of the first cars in line to start practice. He was 2nd fastest on his first run. Kyle made a long run and said, “It is perfect everywhere but I need the left front to get into the track more.” The brought the car in for more adjustments.

Jamie McMurray: Jamie said the car was “on the edge” after his first run. The No. 1 car was 11th fastest at the time. They brought Jamie in for adjustments.

Brad Keselowski: Brad wanted to try a setup he had in the Xfinity Series car. He was 10th fastest after his first run. The team brought him in to work on the balance of the car. The team made a spring adjustments and Keselowski went to the top of the speed chart.

Joey Logano: Joey said the car was too tight in practice. They brought him in for “major” adjustments. Joey was 17th at the time.

Ryan Blaney: Ryan has a lot of momentum after his win last week. The No. 21 team worked on long runs and Ryan was 5th fastest.

Matt Kenseth: Matt said the car has good balance but needs more take off out of the corner.

Denny Hamlin: Denny is a good sleeper pick this week. His No. 11 Toyota has had speed all weekend and his stats at Michigan are pretty solid. Denny made a 10 lap run and then made adjustments. The No. 11 car was the 3rd fastest at the time.

Daniel Suarez: Daniel made a 2 lap run followed by a 3 lap run followed by another 2 lap run. When a team keeps bringing the car in like this it usually means they are not happy with the car. After big changes to the car, they made an eight lap run and went to 3rd fasted on the speed chart. Suarez will start from the rear Sunday.

Martin Truex Jr.: Martin is showing no signs of slowing down anytime soon. He started practice with the 4th fastest car. The team was working on long runs. He was on scuff tires on his first run.

Erik Jones: The No. 77 car started practice with the same setup as the No. 78 car. Erik was 3rd fastest after his first run. Erik spent the last 15 minutes of practice trying to get in and off of pit road. That is usually a good sign the car is good.

Austin Dillon: Austin tells the team, “Entry is good but exit of the corner is a little loose.”

Ryan Newman: Ryan was fighting a tight race car. The brought the No. 31 car in for adjustments and the car continued to be tight. Ryan was 20th fastest after his long run.

Paul Menard: Paul was fighting a loose racecar. They kept trying to tighten him up. He was 27th on the speed chart.

Ty Dillon: Ty starts 37th Sunday for failing post qualifying inspection. After a long run he said, “It is as good as it has been all weekend. Just a touch loose.”

AJ Allmendinger: AJ has had a lot of problems with the car stalling out. He was not happy with the car. AJ crashed the car at the end of practice and he will go to a backup car. AJ will start at the back and be scored from 25th spot.

Chris Buescher: Chris went out and made a 12 lap run and he said, “It is pretty close to where we need to be.” He was 21st fastest at the time.

Trevor Bayne: So far no baby for the Bayne family so it looks like Trevor will be in the car Sunday.

Ricky Stenhouse Jr.: The car was too tight. Stenhouse was 25th fastest after his long run. At the end of practice Stenhouse said, “We are plowing tight all around the track. I do not know what to tell you.”

Darrell “Bubba” Wallace Jr.: Bubba started practice by following Chase Elliott around the track. The team worked on long runs to get Bubba comfortable with the car and they worked on pit road speed. Bubba had 3 speeding penalties last week at Pocono. Bubba made a 6 lap run and brought the car in because it was too tight.

Landon Cassill: Slow is the word for Landon this week. After crashing his primary car, the backup car has no speed. Landon was last in the morning practice and last in this practice. Buyer beware.

David Ragan: David said the car frees up at he gets deeper in a run. He needs to be tightened up. He was 29th fastest at the time. At the end of practice David said, “I think we hit on something.”

Michael McDowell: McDowell made a 10 lap run to start practice. He said the car felt pretty good, but a little tight in the center of the corner. The team was happy with the speed in the car.