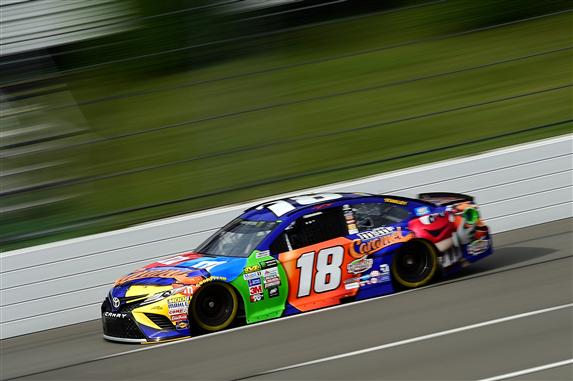 The Monster Energy NASCAR Cup Series cars practiced for the final time at Pocono Saturday. The series had two practices Saturday and then the series will qualify Sunday before the race. This is the first time NASCAR has used this condensed schedule (that I know of). It will be interesting to see how it affects the racing.

The weather was cloudy and 63 degrees at practice today. The cool temperatures provided more grip so the speeds are a little faster than what we will see Sunday for qualifying and for the race.

The weather was cloudy, windy and 68 degrees at morning practice today. Race temperature for Sunday is forecasted to be Sunny and 72 degrees. Track temperatures in the final practice will be similar to what we will see for the race Sunday.

Pit stall selections this week are based upon qualifying from Indianapolis. Kyle Busch has the #1 pit stall and Kevin Harvick has the 2nd choice. These two pit stalls should be an advantage this week.

Most of the teams were working on their race setups this week because the cars will be impounded after qualifying. That means whatever setup is in the car at the end of qualifying will be the setup the teams will be required to start the race Sunday.

The word in the garage today was “brakes” There were many teams who had problems with their brakes in the first race at Pocono (Hendrick Motorsports, Team Penske and Jamie McMurray) so they are running a larger brake package this week. This may take away some speed but it will prevent them from losing their brakes during the race.

Martin Truex Jr. had a 30-minute penalty in final practice for failing inspection at Indianapolis.

Jimmie Johnson: Jimmie is another driver who had brake problems in the first race at Pocono. The team will run with more duct opening this race to get air to the brakes. Jimmie made a 8 lap run to shake down the car. He said, “The balance is good. I need the front to get a little more into the track.” He was 4th-fastest at the time.

Dale Earnhardt Jr.: Junior started practice with a 5-lap run. He said, “I probably had three laps where I didn’t have a major F-up. I just need more consistency.”

Kasey Kahne: Crew chief Keith Rodden said the No. 5 team learned a lot about their racecar at Indianapolis.

Kevin Harvick: The No. 4 team waited 10 minutes before they took the car onto the track. This is normal for Harvick. His lap times were not great (18th fastest in race trim) but the team was working on their long run speed. Rodney Childers told Kevin on the radio, “We are good to go. Bring it in and we will work on the qualifying setup.”

Clint Bowyer: Clint looked pretty good in practice. The No. 14 team worked in race setup for most of the practice. He ran 21 laps and the No. 14 car was 12th fastest.

Kurt Busch: Crew chief Tony Gibson was in Daytona for his grandmother’s funeral. Johnny Klausmier was working with the No. 41 team today in practice. He was the crew chief for the No. 41 car when Kurt won at Pocono last year.

Danica Patrick: Danica was complaining her car was too tight. The No. 10 team spent most of practice in race trim. She was 21st fastest at the time.

Kyle Larson: Kyle spent most of practice in race trim. He had the 4th-fastest speed in race trim. His crew chief told him, “You will be a force to be reckoned with this week.” Kyle said his car is really good in qualifying trim but awful in race trim. I am sure they will have a lot of speed Sunday.

Jamie McMurray: Jamie was one of the first cars out for final practice. He immediately went to the top of the speed chart. The No. 1 team liked their car. They had a brake issue in the first race at Pocono and they are working to insure that does not happen again.

Brad Keselowski: It was race trim only for the Blue Deuce in final practice. Brad liked the car, but he was only 15th fastest on the speed chart. This team usually races better than they practice.

Joey Logano: Joey worked in race trim in practice. The team was searching for speed. Joey was 19th fastest after an 8 lap run.

Ryan Blaney: Ryan won the first race at Pocono and the No. 21 car looks to be a factor in the race Sunday. He made a 5-lap run to begin practice and said, “It is good all around, just need a little help on the exit of 3.” He was 2nd-fastest at the time. Later in practice Ryan kissed the wall with the back right. No damage though.

Kyle Busch: Kyle told his crew chief, Adam Stevens, “Keep an eye on the lap times for the No. 78 and No. 4. That is who we are racing this week.” Kyle worked on his race trim for most of the practice. At the end of practice they put the qualifying trim in the car and Kyle went to #1 on the speed chart.

Matt Kenseth: Matt had the fastest speed in the morning practice but he was one of only 7 drivers in qualifying trim. The No. 20 team worked on their race trim in the final practice and Matt was 7th on the speed chart after a 8 lap run.

Denny Hamlin: Denny had problems with his brakes in the morning practice. The team changed the rotors between practice sessions. Denny start the final practice in qualifying trim and went to the top of the speed chart. The team switched to race trim at the end of practice and Denny said, “It feels like there is no wedge in it. There is no stability.”

Daniel Suarez: Daniel started practice in race trim and made three qualifying runs. The No. 19 car was 19th on the speed chart. The team is searching for “more security” in the car. They put the qualifying setup in the car and he moved up to 8th fastest.

Martin Truex Jr.: Martin had 45-minutes worth of penalties in practice. The team is also missing two of their tire changers this week for an altercation with the crew chief of the No. 18 team during the race last week. This is the most adversity the No. 78 team has faced this week. Truex started practice in race trim and ran laps as fast as cars in qualifying trim. He was 4th-fastest on the speed chart.

Erik Jones: Erik had his best race of the year in his first race at Pocono. He finished 3rd. Today his car was pretty good. Erik was complaining the car was hitting the splitter on the track so the team worked to raise the car up.

Austin Dillon: The No. 3 car was too loose in both practices. Austin said, “The back is snappy loose.” He was 24th at the time.

Paul Menard: Paul started practice with a qualifying setup in the car. He said the car was too loose. He was 16th fastest in qualifying trim while most of the cars were in race trim. The team made some more changes and sent Paul back out. He said, “Much better.”

AJ Allmendinger: AJ told the garage cam team on nascar.com, “We were totally in left field last week. We have a setup that we know will work this week. We just need to find out how to get more speed out of the car.”

Chris Buescher: Buescher won this race last year. After a six lap run he said, “Car is more secure on entry, a little free out of 3, and I have a hard time getting back to the throttle.” Chris was 26th fastest at the time. The No. 37 car always races better than they practice.

Trevor Bayne: Trevor was too loose in practice. The team spent a lot of time in qualifying trim and the No. 6 car was only 22nd on the speed chart.

Aric Almirola: The No. 43 team started practice in race trim. Aric said, “It is just so loose I can barely get  through 1 and 2.” He was 23rd fastest at the time.

Landon Cassill: Landon liked the balance of his car. He was only 31st-fastest at the time.

David Ragan: The No. 38 team started the final practice with a completely different setup from what they had in the morning practice. After a 6-lap run David said, “It is too loose. I can barely hold onto it.” The team worked to put it back to the way it was.

Michael McDowell: Michael has been fighting a tight racecar in final practice. He made 10 laps to start practice before the team switched to their qualifying trim. He was 25th fastest in race trim.

Stephen Leicht: Is filling in for Joey Gase this week in the No. 83 car. Gase is racing in Iowa this week. Leicht spun out in the morning practice. This is his first Cup Series race since 2012 at Phoenix.