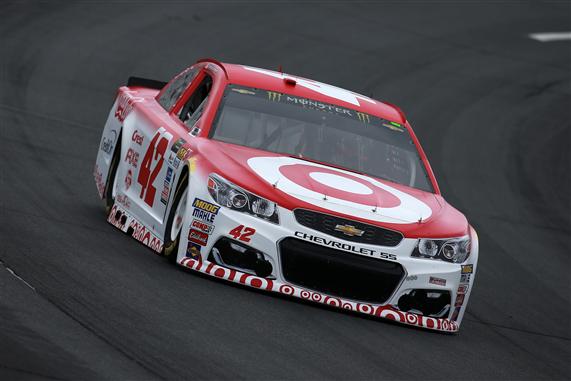 The Monster Energy NASCAR Cup Series cars practiced for the final time at Richmond Friday. There were two practices held Friday and qualifying will be Friday evening. The cars will be impounded for the race Saturday night.

The weather for final practice was sunny and 74 degrees. The forecast for the race Saturday night is clear and 65 degrees. The track should go through some changes during the race but I expect the practice times to translate into race speed.

Chase Elliott: Chase is the highest driver in the playoff standings in on points. He still needs a good finish in case a driver behind him wins the race. His car was one of the best on the long runs. Chase said, “It drives where I want it to go and it is the best at the bottom. I think we will be alright.”

Jimmie Johnson: The No. 48 team is hard to gage. Their car was not very fast and they have not been great the last month. I expect Jimmie to have a lot more speed once the playoffs begin. Jimmie was 31st fastest after his first run. What does that mean? Who knows?? They will probably win the race.

Dale Earnhardt Jr.: Junior will be without his crew chief Greg Ives this week. Travis Mack will move from the car chief to the crew chief duties this week. Junior was having problems with the brakes locking up. The team made some changes to the car and Junior said, “It is a lot better!”

Kasey Kahne: The No. 5 team was having a problem with the car hitting the splitter on the track. They made a shock adjustment between practices and Kahne was 11th fastest after his first run. Kasey said, “It starts off loose and then it gets tighter the deeper we get into the run. It takes about 10 laps for it to be pretty good.”

Kevin Harvick: After his first run in the morning practice Kevin said, “Do not worry about my lap times. I am just trying a few things.” He was 9th fastest at the time. Kevin spent a lot of time working on his pit road speed. The team was happy with his car.

Clint Bowyer: Clint was not happy in the morning practice. He said, “F****ing Toyotas have the top five spots in practice? We need to find a way to beat them. Damn!” After sitting in jail (his words for the penalty he was serving for Final Practice), the No. 14 car had a lot of speed. The team was happy with the car.

Kurt Busch: The No. 41 car has back-to-back top-five finishes. Kurt had top 15 practice speed in the practices for those races but ran in the top 10 in the race. Crew Chief Tony Gibson is not worried about practice times. They know the track conditions will change at night. They were working on what they thought would work at night.

Danica Patrick: Not too bad for Danica. She had a good run over the summer but slowed down in the recent races. She made some long runs in Final Practice and had the 15th-fastest speed.

Kyle Larson: Kyle looked very good in the morning practice. He made a 22-lap run to start final practice and he was 10th fastest. Kyle had a good chance to win the spring race but was on old tires at the end of the race. He should be good Saturday night.

Jamie McMurray: The No. 1 car spent a lot of time on the jack-stands in Final Practice. The car was too tight so they were making a shock adjustment. He wanted the car to run the bottom of the track better.

Brad Keselowski: Brad liked his car in the morning practice and he loved his car in the Final Practice. He said, “It has a lot of drivability but it is tick loose. I think is will be a little tighter in the race so I do not think we need much.”

Joey Logano: The No. 22 car is in a “must win” situation. After his first run Joey said, “It is just OK. We need some work.” After the team put the qualifying trim in the car Joey said, “I think we have a chance at the pole.” He told NBC Sports, “We have a top-five car and we know how to win here.”

Ryan Blaney: This is not one of Blaney’s best tracks, but that has to do more with bad luck than it has to do with bad cars. He had top-10 speed in the Final Practice.

Kyle Busch: Kyle made a 29-lap run to begin practice. He worked on running the low line, the middle and at the top of the track. His lap times may have been affected because he was not trying to run one fast lap. He was working on finding out where the car works the best. Kyle also worked on getting on and off pit road. He had a penalty for driving over the commitment box in the spring race.

Matt Kenseth: Matt had the fastest car in the morning practice. His car is a lot faster on the short runs than it was on the long runs early in practice.

Denny Hamlin: The No. 11 team was focusing on their long-run speed for Saturday night. The trend is for long green flag runs in the race, so they were not concerned with their single-lap speed. Jeff Burton (from NBC Sports) said, “I do not see any cars that can turn in the corners any better than the No. 11 car.”

Daniel Suarez: The No. 19 team brought a fast car to the track this week. Daniel needs a win to secure a spot in the playoffs. The team worked on long runs in the morning practice and he was 19th fastest. They worked on their single-lap speed in Final Practice and Daniel was 2nd fastest. He could spoil the party Saturday night and win the race and knock someone else out.

Martin Truex Jr.: Martin already has the regular season championship wrapped up but the No. 78 team shows no signs of slowing down. Martin was 2nd-fastest in the morning practice and fastest on his first run in Final Practice.

Erik Jones: The No. 77 car was held out of 60 minutes of Final Practice for failing inspection at Darlington. The track temperature in the final practice compares to track temperatures in the race Saturday night. This could hurt the team but they have a lot of good teammates to lean on. Jones has one race at Richmond on his resume and he finished 38th.

Austin Dillon: Austin made a 24-lap run to begin practice. He said, “It has good pace.” (I think he means it is good on the long runs). Dillon said earlier this week that the team figured some things out about their race setup in the tire test at Atlanta. He finished in the top 5 last week with that info.

Paul Menard: Paul will be competing in the Xfinity Series race this week. He usually performs better when he runs two races in the weekend. The No. 27 car was hitting the splitter on the track and making the car tight in practice.

Ty Dillon: Ty went out and made a 24-lap run. Bootie Barker told him, “Not bad. You are 22nd fastest but I have some ideas how to get more speed. Bring it in and I will fix you up.”

AJ Allmendinger: AJ was fighting a tight racecar. The team told AJ to work the track-bar. He said, “That helped a little but we need to free it up more.” The team made a wedge adjustment. He went back out and said, “It is going in the right direction.” He was 18th fastest at the time.

Chris Buescher: Chris said his car was “Snappy loose.” That is the opposite of his teammate. Maybe the teams will work together to help both cars. “A little bit tight but way better than the first practice,” says Buescher. He was 6th fastest after his first run.

Trevor Bayne: Trevor started practice with a 24-lap run. He was 27th fastest. His car was not turning through the center and exit of the corners. His crew chief went to the No. 17 car garage to see what they were doing with their car.

Ricky Stenhouse Jr.: Stenhouse looked good in the morning practice. He was the only driver who was running the high-groove. He was 10th fastest. Crew chief (of the No. 18 car) told Kyle Busch, “The 17 looks really fast in the high-groove. Try a couple laps there.” Ricky told MRN radio, “Being locked into the playoffs feels really, really good. Now I can go out there and give it everything I got and see what happens.”

Aric Almirola: Tight in the middle and loose off the corner was the problem for the No. 43 car.

Landon Cassill: Landon was penalized 60 minutes in Final Practice. His car was decent in the morning practice. Landon was 17th fastest after his first run. Landon said, “We are really close with the balance. Just need it to cut a little better in the center.”

David Ragan: David made a long run to start the morning practice and he said, “We unloaded pretty good this week. I can work with this.” He was 20th-fastest at the time.

Michael McDowell: The No. 95 team was fighting a tight racecar in practice. It was tight in the center and off the corners. After a short run Michael said, “Wow guys we completely missed the setup this week.”