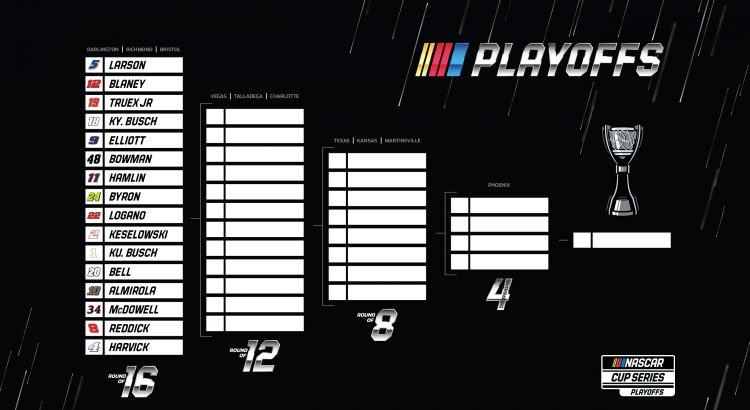 The 2021 NASCAR Cup Series Playoffs will take the green flag Sunday night at Darlington Raceway. The field of 16 is set and now it is time to predict which driver will take home the Bill France Cup Series Trophy.

Each driver was awarded points based on how many races they won, how many Stages they won and where they finished in the regular season points standings. Each point is worth one position in the race, so the more playoff points a driver has; the easier it will be for the driver to advance in the playoffs. Here are the points standings for each driver entering the race at Darlington… 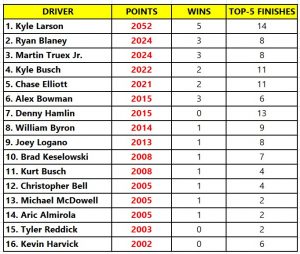 Kyle Larson not only led the Cup Series in wins and top-five finishes; he also received 15 bonus points for winning the regular season championship. The top-12 drivers will advance after the first three races (Darlington, Richmond and Bristol). Larson has a 47 point lead over the 12th-place driver (Christopher Bell), so he could almost take a race off and still advance to the Round of 12.

Here are the NASCAR Cup Series Playoff Bracket, the races for each round and the driver’s position in the rankings… 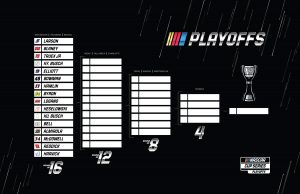 So who will advance in each round? Here are my predictions….

The winner of each race automatically advances to the next round. Martin Truex Jr. smoked the field at Darlington in May by leading 248 of the 293 laps but he is not my pick to win the Southern 500. Kyle Larson has been awesome at The Track Too Tough to Tame and he has been the class of the field in 2021. Larson is my pick to win Sunday night and the first driver to advance into the Round of 12.

The next race is at Richmond. There have been three races on the short, flat tracks, using the 750 HP aero package (Phoenix, Richmond and New Hampshire). I will pick the driver who has run the best in these races as my winner at Richmond. Denny Hamlin has not won yet in 2021, but I will pick him to get to Victory Lane at his home track. Hamlin finished 3rd at Phoenix, 2nd at Richmond and 10th at New Hampshire. Hamlin led 207 of the 400 laps at Richmond in April. The No. 11 car will have a good chance to win the second race of the playoffs.

The third race of the playoffs is the Bristol Night Race. I am so glad they are taking that stupid dirt off the track. This is one of the best races of the season and it would have been a shame if they wrecked it with dirt. This race should be name “The Kyle Busch Invitational.” Rowdy has 8 Cup Series wins, 9 Xfinity Series wins and 5 Truck Series wins (22 total wins) at Bristol. He is the best driver at this track so I will pencil Kyle Busch in for the win at Bristol. 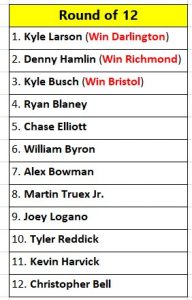 The first race of the Round of 12 is at Las Vegas. I know the easy way to go is to simply advance Kyle Larson to the next round after the first race, but he dominated the race in Sin City in March. There are no signs of the No. 5 car slowing down, so Larson will be my pick to win the race in Las Vegas and the first driver to advance to the Round of 8.

The second race of the Round of 12 is at Talladega. This is where things could get interesting. We could easily have a non-playoff driver win at Talladega. That would advance at least 6 drivers to the Round of 8 on points. I don’t think it happens though. Ryan Blaney won the last two races where the draft came into play (Michigan and Daytona). He is better at Talladega so I will pick Blaney to get his third win at this track. 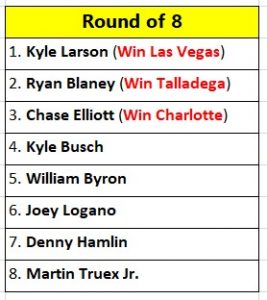 The first race of the Round of 8 is at Texas. The Cup Series did not have a regular season race at Texas this year, but they did have the All-Star Race. Guess who won… Of course it was Kyle Larson and of course I am picking the No. 5 team to win again. Larson has dominated most of the 1.5-mile tracks this year so I will take a bite of the low hanging fruit and advance Larson to the championship race at Phoenix.

The final race of the Round of 8 is at Martinsville. Chase Elliott won this race last year and I predict he will do it again this season. Elliott finished 2nd at Martinsville in April and he has not finished outside the top-five at this track since 2019.

There will be two drivers advancing to the championship race at Phoenix since I have Kyle Larson winning two races in the Round of 8. There should be three drivers battling for the two spots. Martin Truex Jr. has won 3 of the last 4 races at Martinsville. Denny Hamlin led 276 of the 500 laps at Martinsville in April. Ryan Blaney has finished 11th, 2nd, 2nd, 5th and 4th in his last five races at Martinsville. Each of these drivers will have a good chance to win, but I will advance Martin Truex Jr. and Denny Hamlin on points because of their experience under pressure. 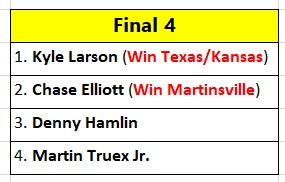 If the 2021 NASCAR Cup Series Playoffs play out as I predicted, we will have a battle between two Chevy’s from Hendrick Motorpsorts and two Toyota’s from Joe Gibbs Racing. How awesome will that be? (Unless you are a Ford Fan)

Chase Elliott won this race last year and Denny Hamlin won the November race at Phoenix in 2019. Martin Truex Jr.won the race at Phoenix in March. Each of these drivers have something on their resume that Kyle Larson does not have… a win at the championship track. So of course I am going to fade Larson at Phoenix, right? As Lee Corso says, “Not so fast my friend.”

Kyle Larson has not only been the most dominant driver in the Cup Series, he has been the most dominant driver on the planet. I could list all of the big races around the country that Larson has won this year but I would be writing all day long. He has numerous championships in all types of cars. I predict he will add a Cup Series Championship to his collection in 2021.