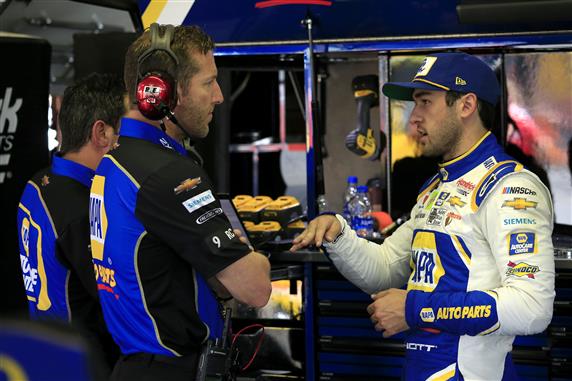 The races at Talladega are the most unpredictable on the schedule. Trying to predict a finishing order is simply a waste of time. The “Big One” is going to happen, and it will take out the best cars. We can analyze the data and look at the drivers who are better than others at missing the “Big One” and finishing up from at Talladega. 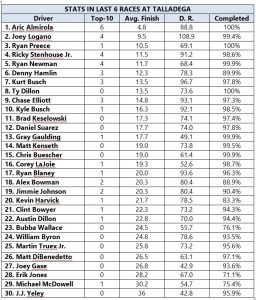 ** Completed means what % of the laps did the driver complete

– Martin Truex Jr.: Talladega ranks as the worst track for Martin Truex Jr. He has crashed out of 4 of his last 6 races at the track. His average finishing position at Talladega since 2016 (7 races) is 28th. There are better races to use Truex at.

– Kyle Busch: Talladega ranks as the 3rd worst track for Kyle Busch. He usually runs up front but is often caught up in a mess at the end of the race. His average finishing position in his last 7 races at Talladega is 18th. Busch is a “Boom or Bust” pick this week. He is either going to finish in the top 5 or crash out of the race.

– Denny Hamlin: Denny Hamlin is the best driver at Daytona. He has won the last two Daytona 500’s. He is also good at Talladega but he does not win at this track as much. Hamlin finished 3rd, 36th, 4th, 14th, 6th and 3rd in his last 6 races at Talladega. He should be one of the best picks this week.

– Erik Jones: Erik Jones won at Daytona in 2018. That makes him a great pick this week, right? Do not get too excited about Jones this week. Talladega is his worst track. He has finished 33rd, 36th, 39th, 8th, 19th and 34th in his 6 races at the track. I would save him for other tracks in season long games.

– Joey Logano: If you’re wondering where Brad Keselowski’s crown is for being the King of Talladega, well his teammate has it. Joey Logano has been fantastic at avoiding wrecks and finishing up front at Talladega. Logano finished 4th, 1st, 5th, 4th and 11th in his last 5 trips to Talladega. He is the best pick in the field this week for season long games.

– Ryan Blaney: Ryan Blaney won the last race at Talladega and I would not be surprised to see the No. 12 car in Victory Lane again Sunday. Team Penske Racing is by far the best at Talladega and you cannot have too many of their drivers in your lineups. Blaney also finished 2nd in the Daytona 500 this season. He seems to have the Superspeedways figured out.

Matt DiBenedetto: It is hard to get a good read on Matt DiBenedetto this week. Team Penske and the Wood Brothers Racing are typically really good at Talladega but this tracks ranks as the worst for DiBenedetto. He has 10 starts at the track with an average finishing position of 28th. Last year he finished 31st and 30th. I will probably be avoiding him in most games this week.

– Kevin Harvick: It will not be hard to find Kevin Harvick Sunday. He always runs up front. The problem is that he seldom leads the race. Harvick usually runs in rows 2 or 3 and that is where the problems occur. Sometimes the races go accident free and Havick finishes up front, like his 5th place finish in the Daytona 500 this season. But most years there is a wreck. Harvick finished 17th, 38th, 28th and 4th in his last 4 races at Talladega.

– Clint Bowyer: Clint Bowyer is a good Superspeedway driver but his is the ultimate “Boom or Bust” driver. He finished 23rd, 29th, 2nd, 31st, and 35th in his last 5 races at Talladega. Bowyer usually runs up front by Kevin Harvick and they both have a habit of getting caught up in the “Big One” at the end of the race.

– Aric Almirola: I am all in on Aric Almirola this week. He is the safest pick in the field. Talladega is his best track. Almirola has completed every lap in 9 of the last 10 races at Talladega. Are you freaking kidding me?!! Almirola has finished 4th, 9th, 1st, 7th, 5th, 4th and 8th at Talladega in his last 7 races at the track. No other driver comes close to those stats.

– Chase Elliott: Chase Elliott won the spring race at Talladega last year. He is quickly becoming one of the best drivers at this track. Elliott has finished 1st, 8th, 31st (engine problems) and 3rd in his last 4 races at the track. Elliott is a good choice for your teams this week.

– William Byron: Talladega ranks as the 2nd worst track for William Byron. He has competed in 4 races in the Cup Series at the track. Byron finished 33rd, 21st, 20th and 29th. He crashed out of 3 of the 4 races. There are probably safer picks for your team this week.

– Alex Bowman: Alex Bowman is another “Boom or Bust” driver at Talladega. He finished 37th, 2nd, 33rd and 8th in his last 4 races at the track. I prefer to save Bowman for the 1.5-mile tracks in allocation games. I will not be using Bowman too much this week.

– Matt Kenseth: Most people will remember Matt Kenseth leading the field around the track at Talladega in the No. 20 car for Joe Gibbs Racing. He was very good at leading laps at this track. He was not very good at finishing races though. Kenseth finished 25th, 26th, 23rd, 28th, 24th and 14th in his last 6 races at the track.

– Kurt Busch: Kurt Busch is a driver you want to be all in on this week. For some reason he is really good in the spring races at Talladega and really bad in the fall. I think it has to do with the pressure to perform because of the playoffs in October. Busch has finished 6th, 2nd, 6th and 8th in his last four spring races at the track. I will probably save him in allocation games, but I will use him in games were you are not limited on starts with a driver.

– Ryan Newman: Ryan Newman is one of the top 5 picks in the field but will he have PTSD from his wreck at Daytona? Newman should have won that race. He is also very good at Talladega. Newman finished 2nd, 9th, 25th, 7th and 2nd in his last 5 races at Talladega. I am not concerned with Newman being afraid to drive the car Sunday so I will have a lot of shares of the No. 6 car.

– Ricky Stenhouse Jr.: Ricky Stenhouse Jr. has a reputation of wrecking the field at Talladega but usually he is not involved in the wrecks. Stenhouse has finished 5th, 1st, 26th, 5th, 3rd, 25th and 9th in his last 7 races at Talladega. Stenhouse knows this race is one of his best chances to win and lock up a spot in the playoffs. I am sure he will wreck to field to win again Sunday (as long as he doesn’t wreck my other drivers, I do not care).

– Chris Buescher: Chris Buescher is one of those drivers who is good at Daytona and sucks at Talladega. Buescher has 9 starts in the Cup Series at Talladega and his average finishing position is 22nd. He wrecked out of both races at the track last year. Maybe the switch to Roush Fenway Racing will help him this week.

– Austin Dillon: Austin Dillon has finished almost everywhere at Talladega. He has some top 10 finishes, some finished outside the top 30 and he has even finished about 4 rows deep into the grandstands. He has been pretty good lately though. Dillon finished 6th, 14th and 17th in his last 3 races at the track. I will take some chances with Dillon Sunday.

– Ty Dillon: Ty Dillon is a lot better than his brother at Talladega. His worst ever finish at the track is 17th. That is not bad. The most incredible stat for Dillon is that he has finished on the lead lap in a 6 of his races at Talladega. The dude is one of the safest picks in the field this week.

– Corey LaJoie: Corey LaJoie has always been pretty good at Talladega and this year he could be even better. Usually GO FAS Racing has 3rd or 4th generation cars. They have cars provided by Stewart-Haas Racing this year. LaJoie finished 7th and 11th at Talladega in old Roush Fenway Racing cars last year at this track. His new SHR car should have more speed. If LaJoie was ever going to win, it will happen Sunday.

– Ryan Preece: Ryan Preece has become one of the more underrated drivers on the Superspeedways. He finished 3rd and 18th in his 2 races at Talladega. Preece also finished 8th at Daytona last year. This is a good race to take a chance with Preece.

– Brendan Gaughan: He’s not Gaughan yet!! I became friends with Brendan Gaughan when I lived in Las Vegas. I know he is very excited for this race and his team has been working on their car for a while. Gaughan finished 27th, 8th, 12th and 22nd in his last 4 races at Talladega. It would be a good idea to use him as your One & Done pick this week or in the October race at Talladega.