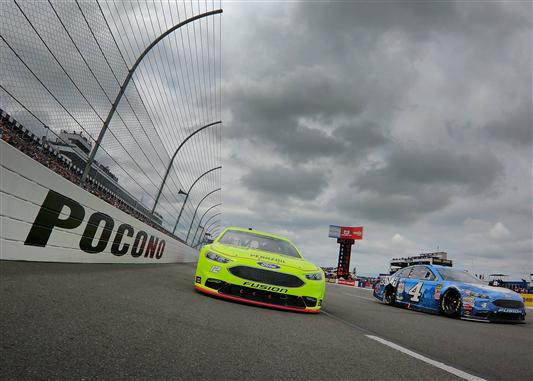 This is a unique week for the Driver Group Game. Usually our lineups need to be selected before any of the cars make laps on the track. Not this week. The MENCS will qualify the cars Saturday (11:35 a.m. ET on FS1) so out lineups do not need to be set until 8 a.m. ET Saturday morning. This gives us an opportunity to watch both practices before making our choices for Sunday. We need to take advantage of this opportunity because it only happens a few times each season.

Here are my updated picks for the Pocono 400…

Martin Truex Jr. (7): The No. 19 team is on quite the hot streak right now. Truex has won 3 of the last 5 races. He is also the defending race winner of the Pocono 400. The No. 19 car was 10th fastest in both practices but his speed is a bit misleading. Truex did not make a qualifying run in either practice. That could cause him to start deeper in the field but he has won from the 13th and 14th starting positions in 2 of the last 3 races.

Brad Keselowski (7): Keselowski has been one of the most consistent drivers at Pocono. He has finished 6 of the last 7 races at the track in the top 5. That is awesome. The No. 2 car looked really fast on Friday. The car was so fast in the first practice that they decided to only work on qualifying runs in final practice. Keselowski has won 3 races this season and I would not be surprised to see him in Victory Lane again Sunday.

Denny Hamlin (5): Hamlin leads the series with 4 wins at Pocono but his last win was in 2010. The 2019 aero package will have downforce similar to what we saw the last time Hamlin was dominant at this track. Joe Gibbs Racing has won 8 of the 13 races this season so Hamlin should have a fast car. Hamlin really liked his car in practice. He was 6th fastest in the first practice, 11th in final practice (did not make a qualifying run) and he had the 8th-fastest 10-lap average speed. I will take a chance with Hamlin this week.

Kurt Busch (6): Busch is 2nd in the series with 3 wins at Pocono. His last trip to Victory Lane at the Tricky Triangle was in 2016. Busch is having a pretty solid 2019 season. He has finished 7 of the 8 races using the 550 HP engine, higher-downforce aero package in the top 10. That is a series best. The No. 1 car was No. 1 on the speed chart in final practice. I really like what I saw from the Chip Ganassi Racing cars Friday. This is a good race to use another allocation with Busch.

Ryan Blaney (5): Blaney loves to race at fast tracks. The 2019 aero package should produce some high speeds since the drivers will hold it wide open through the 3 corners. That should play right into the hands of Blaney. He won at Pocono in 2017 and Blaney ran very well in the Pocono 400 last year. Blaney was 2nd fastest in the first practice, 14th fastest in final practice (did not make a qualifying run) and he had the 6th-fastest 10-lap average speed. The No. 12 car will finish up front “if” they can avoid mistakes Sunday.

Clint Bowyer (5): Bowyer has been hit or miss at Pocono in his career and this week he should have a lot of success. The No. 14 car rolled off the truck with a lot of speed Friday. Bowyer was 9th fastest in the first practice, 6th fastest in final practice and had the 10th-fastest 10-lap average speed. Bowyer looked like he had the fastest car from the Stewart-Haas Racing stable. I will use another allocation with him if he qualifies well Saturday.

Chris Buescher (5): Buescher is the best pick in Group C Sunday. The No. 37 is on a hot streak right now. Buescher finished 10th at Kansas and 6th at Charlotte. There is a good chance he will finish inside the top 15 Sunday. He won a rain shortened race at Pocono in 2016, but hey… you take the wins any way you can get them. Buescher did not have post laps in the top 15 in either practice but the team was working on their long run speed. The No. 37 car did not make any qualifying laps in practice. I still like Buescher for the race this week.

Ryan Preece (8): I am going to take a chance with Preece this week. He is running the Xfinity Series race and the MENCS race this weekend. The extra seat time on Saturday should help him in the race Sunday. Preece said his car was handling well in practice. He posttest the fastest speed of all of the Group C drivers in final practice. I will see if I can catch lightning in a bottle with the No. 47 car Sunday.