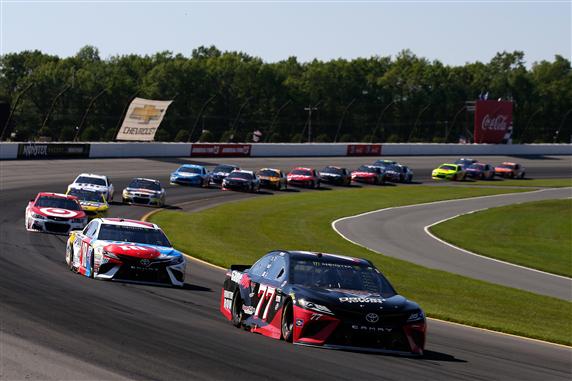 The Monster Energy NASCAR Cup Series travels to Long Pond, Pennsylvania this week for the Overton’s 400. The race can be Sunday at 3pm ET on NBC Sports Network. Be sure to test your Fantasy NASCAR skills in the Yahoo Fantasy Auto Racing game.

I have had a lot of bad luck in this game this year but my Yahoo Fantasy Auto Racing picks are beating 97% of the entries (5,669 points).

I never understood why NASCAR has to race at the Tricky Triangle twice in less than two months. The schedule this week is absurd! I have been dreading this weekend all season. There are two practices Saturday morning and qualifying will be three hours before the race Sunday. I must wait until after qualifying to make my picks and this does not give me a lot of time to analyze the data, make my picks and write my articles. I assure you I will do the best I can to get the picks posted in time for the race Sunday.

There are three really good picks in Group A this week. Kyle Busch must be on every team because he dominated the first races at Pocono and he dominated the race last week at Indianapolis. The question comes down to Martin Truex Jr. or Kevin Harvick. Both drivers should be good this week.

Truex has been more consistent this year but Harvick has the better stats at Pocono. Since I know I will be using Kyle Busch for the race the decision comes down to who will score more qualifying points. Truex qualified second to Busch in the first race at Pocono while Harvick qualified 12th. My strategy is to use Busch for the race and Truex for qualifying points. I would make sure you select two of these three drivers for your team this week. They are by far the best options for your team.

Is Busch cursed? I have picked him to win four times this summer and he continues to lead the most laps but find a way to lose the race. So let’s try this again… Kyle Busch will win Sunday! The No. 18 car led 195 of the 320 laps at Pocono and Indianapolis. Busch had by far the best car in both races. He also won the pole for both races. Sooner or later the No. 18 team will find a way to get to Victory Lane. I think the curse if lifted this week. Do not worry about allocations with Busch this week. Just start him with confidence.

Truex Jr. is the best driver to pare with Kyle Busch this week. Truex qualified 2nd and finished 6th in the first race at Pocono. The No. 78 car has been fast at every track and there is no reason to believe they will not run up front this week. Truex should qualify in the top five and finish in the top five at the Tricky Triangle. Do not try to be cute with your picks this week. Select the best car in the sport and enjoy the bonus points for qualifying that Truex will earn your team this week.

There are many good choices in Group B this week. Ryan Blaney should be on all teams this week since his car has been so strong on the large tracks. Pocono has been one of the best tracks for Kurt Busch so this is a good chance to use an allocation with him. These two drivers are the best choices for Group B. Now the question is, who should we pare with them?

Chase Elliott has a history of running well at the Tricky Triangle (even though it is just three races). Hendrick Motorsports always brings fast cars to this track so Elliott is a great play this week.

The other drivers I would consider this week include Ryan Newman, Kasey Kahne, Jamie McMurray and Ricky Stenhouse Jr. Newman is the safest bet to qualify up front and finish in the top 12. Kahne will have momentum after winning the Brickyard 400 last week. McMurray has been great this season but Pocono is one of his worst tracks. Stenhouse will not qualify up front but he has a habit of finding his way to the top 12 at the end of the race.

Blaney will be the defending race winner at Pocono. That has to have the young driver fired up for this race. The Wood Brothers know how to get speed out of their cars. Blaney won the first race at Pocono because he had a fast car and not because of pit strategy. The No. 21 car was one of the fastest last week at the Brickyard and Blaney should be able to run in the top five again Sunday.

Busch has been hard to trust this season but this is the week fantasy players can hitch their wagon to the No. 41 car (trust me he will not crash it). Busch followed up his trip to Victory Lane at the Tricky Triangle in 2016 with a fourth place finish in the first race at Pocono. He qualified fifth, had the fifth best average running position (9.54) and the seventh best driver rating (103.5) in the race. This is one of the best tracks for Busch so it is a good idea to get him in your lineups this week.

The No. 24 team continues to bring fast cars to the track but Elliott seems to have some bad luck this season. Hopefully he got the daemons out last week and his luck turns around at the Tricky Triangle. Elliott has three races at Pocono on his resume. He has finished 4th, 33rd and 8th. Elliott was running up front last year when the No. 24 car got a flat tire and sent him and race leader, Joey Logano into the wall. Without that flat tire Elliott would have three straight top 10 finishes at Pocono.

I am using Newman for the last spot on my team. He will have momentum after his top-five finish last week in the Brickyard 400 and he is one of the six drivers who qualified in the top 10 for both Pocono and Indianapolis this season (Kyle Busch, Martin Truex Jr., Ryan Blaney, Jamie McMurray and Joey Logano were the other drivers.) Newman finished 14th in the first race at Pocono and it was his third consecutive top 14 finish at the track. I will take that kind of production from Newman this week.

The two best drivers for Group C are Erik Jones and Daniel Suarez. Jones should be on every team this week because he excels on the large flat tracks. Suarez has been Mr. Consistent just like the driver he replaced (Carl Edwards). I see no reason why you should look any further than these two drivers this week.

Jones had his best race of the season in the first race at Pocono. He qualified 15th, led 20 laps and finished third. He also had a fast car last week at the Brickyard 400. This race is all about speed and Furniture Row Racing has it right now. The Tricky Triangle has a habit of producing first time winners (Chris Buescher last year and Ryan Blaney this year). I would not be surprised to see Jones win his first MENCS race at Pocono Sunday.

Suarez had a good but not great race in his first trip to Pocono. He qualified 14th and finished 15th. Suarez has been on quite a roll in his last two races. He finished sixth at New Hampshire and seventh last week at Indianapolis. Both of those tracks are flat like Pocono so I expect another solid run from the No. 19 car this week.

I will post my final picks for Yahoo Fantasy Auto Racing Sunday after qualifying.