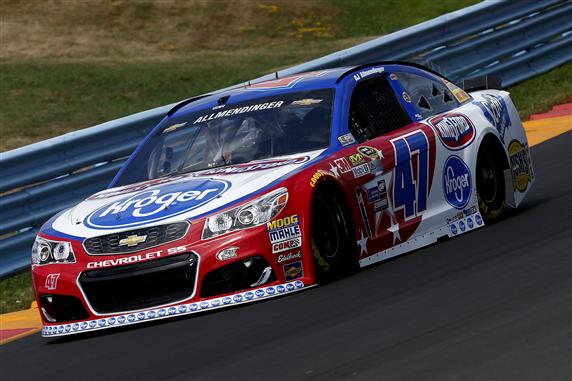 The Monster Energy NASCAR Cup Series travels to Watkins Glen, New York this week for the I Love New York 355 at The Glen. The race can be Sunday at 3pm ET on NBC Sports Network. Be sure to test your Fantasy NASCAR skills in the Yahoo Fantasy Auto Racing game.

I have had a lot of bad luck in this game this year but my Yahoo Fantasy Auto Racing picks are beating 97% of the entries (5,955 points).

NASCAR will use the same schedule for Watkins Glen as they used last week at Pocono. There will be two practices Saturday and qualifying will take place Sunday before the race. This means fantasy teams will get to see two practices before lineups lock early Sunday morning. I will have my picks updated Saturday evening.

The most important thing to know this week is that you must save your top drivers this week. This race is unpredictable and you will want to save your best drivers for the oval tracks. I will use Kyle Busch because he is so good at this track and Group A is deep. I do not recommend using Kyle Larson, Erik Jones or Daniel Suarez.

Most of the good drivers this week are in Group A. Kyle Busch and Martin Truex Jr. are the two best drivers in the sport right now and they both have had success at Watkins Glen. I expect the No. 18 and No. 78 cars to be up front Sunday.

Brad Keselowski and Joey Logano have the best stats at Watkins Glen but both drivers are hard to trust. Keselowski has finished 4 of his 7 races at the track in the top 3. Logano won this race in 2015 and he finished 2nd last year. Road course races usually come down to strategy so both of these drivers are worth a spot on your team this week.

The No. 18 team finally found their way to Victory Lane last week. I expect this team to catch fire now that they got the monkey off their back. After not winning a race in over a year, I expect Busch to win back-to-back races. He is the best pick in the field this week. Busch has an average finishing position of 4.8 in his last 10 races at Watkins Glen if you take out the race in 2014 (Busch had engine problems). Busch is the only driver in the field with multiple wins at the track. I hate to burn an allocation with the No. 18 car but he is just too good to pass up this week.

One of the Team Penske cars should be in this spot if you want to go purely off of the stats. I do not trust Brad Keselowski or Joey Logano right now so I am going with a driver who has consistently run up front, Kevin Harvick. The No. 4 car has an average finishing position of 4.4 in the last five races (not counting Daytona). Harvick won the last road course race and I expect him to be fast Sunday. He has earned bonus points for qualifying in 2of his last 3 races at Watkins Glen.

The best choice in Group B is probably Kyle Larson. He was running up front last year with a good chance to win the race when he was taken out by AJ Allmendinger. The No. 42 team has always been very good at this track. Juan Pablo Montoya dominated the races at this track and his success has carried over to Larson. As much as I would like to use Larson this week, I have to save his allocation for next week at Michigan.

There are many drivers in Group B who have had mediocre success at Watkins Glen. For this reason I cannot select any drivers for qualifying points. I am selecting four drivers and hoping two of them run well in practice and it makes them an obvious choice for the race.

Allmendinger burned a lot of people at Sonoma and they may be afraid to use him this week. The No. 47 team puts a lot of effort into winning this race. Allmendinger is much better at Watkins Glen than he is at Sonoma. He has finished 5 of his last 6 races at the track in the top 10, including a trip to Victory Lane in 2014. You have to give Allmendinger a chance this week. He gives your team a great chance to save an allocation with one of your top drivers.

Bowyer is quickly entering the “must win” territory of the Playoff standings. This is the only wild card race left before the Playoffs so the No. 14 team could gamble and win the race. Bowyer finished 2nd at Sonoma and he has a history of running well at Watkins Glen. He finished 3 of his 4 races with Michael Waltrip Racing in the top 6 at the track. I expect similar results now that he is with Stewart-Haas Racing.

Busch has been one of the most consistent drivers on the road courses in the sport. He has finished four consecutive races at Watkins Glen in the top 11. Since joining Stewart-Haas Racing Busch has an average finishing position of 6.3 at the track. This is a good week to use an allocation with Busch.

I really do not want to use Elliott this week so I will write his name in pencil and make my final decision after the two practices Saturday. I would rather use Ryan Newman or Kasey Kahne but I do not trust them as much as I trust Elliott. Usually rookies struggle on the road courses but that is not the case for Elliott. He finished 13th at Watkins Glen last year and 8th at Sonoma this year. For now Elliott gets the last spot on my team.

It is going to be hard to find any value in Group C this week. I highly recommend fading Erik Jones and Daniel Suarez. Both drivers should run in the top 15 but this track is too risky to burn an allocation with these drivers.

I am hoping two drivers from Group C run well in practice and make this pick easier. Be sure to check back Saturday night for my updated picks.

McDowell is a sneaky play this week. He started off his career really struggling at Watkins Glen but he has seemed to have figured it out the last two seasons. McDowell qualified 31st and finished 20th in 2015. Last year the No. 95 car qualified 11th and finished 17th. The car should have more speed now that the team has full support from Richard Childress Racing. I expect another top-20 finish from McDowell this week.

Dillon has never competed in a MENCS race at Watkins Glen but he has 3 races at the track on his Xfinity Series resume. Dillon finished all 3 races in the top 11. He has also run well at Mid-Ohio and Road America. The No. 13 car was one of the best sleeper picks when Casey Mears drove the car. I am hoping some of that success translates over to Dillon this week.

Other Good Choices: Erik Jones, Daniel Suarez (Although I do not recommend using them)

I will post my final picks for Yahoo Fantasy Auto Racing Sunday after qualifying.