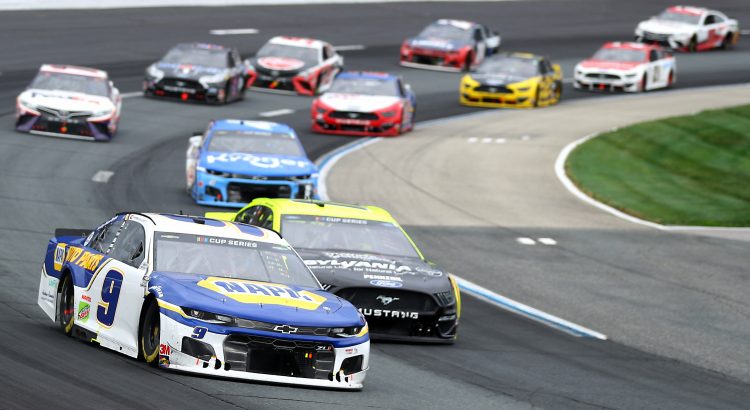 Have you wished you could run NASCAR and be in charge of making the schedule? I know there is a lot of logistics that go into when and where our favorite drivers’ race, but sometimes I wish I could make the schedule. Here is what I would do with the 2023 NASCAR Cup Series if I was in charge…. 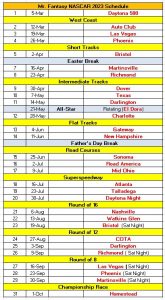 NASCAR has a long, grueling schedule. They start their season with the Daytona 500 in February and end the season with the championship race in November. The only professional sport with a longer season is the PGA Tour. Does the NASCAR schedule need to be this long? I don’t think so.

The NFL season is about to start and there are a lot of diehard NASCAR fans who do not care about the NFL. There are also a lot of NFL fans who stop watching NASCAR once the pigskin is tossed around. Maybe it is not a good idea for the NASCAR Cup Series to go head-to-head with the NFL.

I would prefer a shorter schedule. I would still start the NASCAR schedule with the Daytona 500. That is a tradition that does not need to be messed with. I would shorten the schedule to 20 regular season races and 11 playoff races.

My schedule would have the Cup Series competing twice at Daytona, Darlington, Bristol, Richmond, Martinsville and Las Vegas.

I know this may be unpopular but I would eliminate Indianapolis, Pocono and Michigan from the schedule. The Cup Series tried everything it could at Indy and the track just does not work for stockcars. Pocono is one of the best tracks to visit but does anyone really get excited to see the Tricky Triangle show up on the schedule? I am just not a big fan of Pocono so I took it off the schedule. I really wanted to keep Michigan on the schedule but I could not find room for the track.

I am also a fan a grouping tracks together on the schedule. Here is how I would group the races together…

The schedule needs to start with the Daytona 500 and the tradition of traveling to the west coast after the “Super Bowl of Motorsports” makes sense. The weather is typically nice on the west coast early in the season and it makes sense to visit all of the tracks at the same time. It is a 2,350 miles from Charlotte to Auto Club. My schedule has NASCAR keeping the west coast swing intact on the schedule.

So how did the racing go on the west coast? Did any tempers get heated up? If so, I am giving the drivers plenty of time to get payback because I have three short tracks coming up next on the schedule. The teams will compete at Bristol (NO FREAKING DIRT!!!), Martinsville and Richmond all together. This schedule is similar to what NASCAR has now and I see no reason to change it.

The Cup Series raced on Easter this year. I would go back to the tradition of giving the teams time to spend with their families for Easter and take the week off.

The Cup Series will travel to Texas and Darlington for some more intermediate track racing in May. Texas has a bad reputation as being a bad track but the people in Texas deserve to see a race and the Gen-7 car made the racing a bit better this year. To make up for having Texas on the schedule, I am rewarding the fans with two trips to Darlington. The first trip to “The Track Too Tough to Tame” will be in May.

The intermediate portion of the schedule will conclude with the traditional Memorial Day race in the Coca-Cola 600 at Charlotte. NASCAR celebrates the troops and the Memorial Day holiday better than any other sport. There is no need to change this race on the schedule.

You cannot have too many short tracks on the schedule so after the Cup Series celebrates Memorial Day in Charlotte, I will have the teams competing at two short, flat tracks. The first will be at WWT Raceway (Gateway). This track was a good addition to the 2022 schedule. I do not see any reason why the Cup Series should not go back to the little track outside of St. Louis in 2023.

The racing on the road courses has been hit or miss on this season. The Gen-7 car has performed well of the true road courses, but no so great on the tracks that were turned into road courses.

I am not a fan of the idea of the Cup Series racing on the streets of Chicago, so that is not going to happen on my schedule. I do like the tradition of having the Cup Series celebrate the 4th of July at Road America. I will keep Road America on the schedule and let the people in Cheese Country light their fireworks at the race track.

Sonoma will stay on the schedule in June. I know it is a long trip to Northern California from Charlotte, but it is a beautiful part of the country that the teams enjoy and Sonoma puts on a good race. I wanted to make a Sonoma – Portland portion of the schedule, but I thought it would be more important for the Cup Series to race at Road America following the race at Sonoma. I would like the idea of the Cup Series racing in Portland in the future.

The road course portion of the schedule will end with a race at Mid Ohio. The Truck Series puts on a good show in Ohio. I would like to see what the Cup Series can do at the track (I am replacing a Michigan Wolverines track for an Ohio State Buckeyes track. That should piss the people from the “state up north” off… 😊)

The Cup Series teams know there are only three races left until the playoffs begin and I will make sure they stay up all night long by ending the regular season with three trips to Superspeedway tracks.

NASCAR repaved Atlanta before the 2022 season began and now it uses the Superspeedway aero package and races like a Superspeedway. They ruined this track in my opinion, but it is what it is. There is no need to race at Atlanta twice until the track wears out a bit, so the Cup Series will make their only trip to Atlanta in July.

The regular season will end with back-to-back races at Talladega and Daytona (Yes, I am that sick). Instead of the drivers having one last chance to score a playoff spot, they will now have two. Giddy Up!!! This should be fun!

The race at Daytona will be a Saturday race under the lights.

Let’s start the playoffs with one big party in Nashville. The teams could show up early (Friday) and NASCAR could honor the 16 drivers competing for the championship by letting them do burnouts down Broadway Street in Nashville before the teams get serious on Saturday for practice and qualifying.

It is important to have three different types of tracks in the playoffs so the driver’s skills behind the wheel are truly tested. The playoffs start at the intermediate track in Nashville and then it will be time to make some left and right-hand turns at Watkins Glen.  This is the best road course on the circuit (IMO), so I think it deserves a spot in the playoffs.

The first round of the playoffs will conclude with a “no holds barred match” at Bristol (Once again… NO FREAKING DIRT!!!). This will be the traditional Bristol Night Race. It will fun to see the drivers compete for a spot in the Round of 12 and see if any drivers “get their cage rattled.”

The trend of diversity in each round of the playoffs will continue in the Round of 12. The second-round of the playoffs will take the green flag at COTA. The road course in Texas was a disaster the first year because of the rain, but it bounced back this year and produced one of the more exciting finishes of the season. Just think how the racing will be with a trip to the Round of 8 on the line.

The Cup Series will travel to Darlington to celebrate Labor Day in the Southern 500. NASCAR went back to this tradition a few years ago and it is a tradition that needs to be left alone. So Darlington gets the spot as the second race in the Round of 12.

Now it is time to get serious…. The Cup Series will take a trip back to the west coast to see who will be competing for the championship. The first race in the Round of 8 will be under the lights at Las Vegas. This race needs to be a Saturday night race since it is so hot in September in Sin City and it will keep NASCAR from going head-to-head with the NFL (and keep me from having to watch two TV’s at the same time).

The Cup Series will stop at Phoenix for another Saturday night race after they compete in Las Vegas. Phoenix did a good job as the championship track, but it is time to go back to Homestead. Don’t worry Phoenix fans; you still get two races on my schedule.

Martinsville has had the tradition of being the final race before the final four is set. I will keep that tradition going because it sure creates a lot of drama. Once again, this has to be a Saturday night race.

OK, that is my schedule. I am sure some will hate it and some will love it. Be sure to follow me on Twitter and let me know your thoughts (@MrFantasyNASCAR).