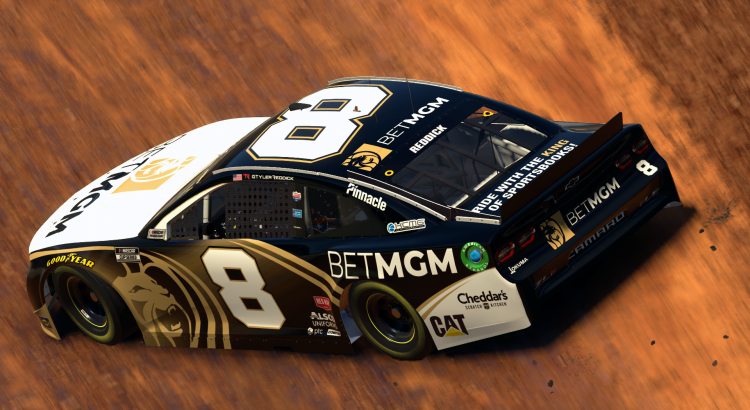 The NASCAR Cup Series takes their circus… I mean show… to Bristol Motor Speedway to play in the dirt. This race last year was a mess. Many of the cars overheated since the mud built up on their grills and other drivers could not see anything since it was so dusty. The race has been moved to a night race to help control the dust. I hope that helps.

The favorites did not fare well in the Bristol Dirt Race last year. The same drivers that are favored to win Sunday night were favored last year. Kyle Larson (5-1), Christopher Bell (6-1) and Chase Briscoe (8-1) were the favorites. Larson and Bell have similar odds this year but Briscoes’ odds went down to 14-1. Joey Logano won the race at 30-1 and Ricky Stenhouse Jr. finished second at 25-1 odds last year. I expect the favorites to learn from their mistakes last year and compete for the win Sunday night, but there is still a few value picks I want to add to my betting portfolio this week. 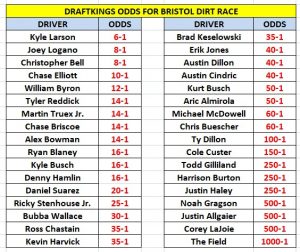 ** The first number is the amount of money based on the second number (the amount of the wager). So if you bet $1 on Kyle Larson, you will win $6.

Here are my best bets for the Bristol Dirt Race…

KYLE LARSON (6-1): I hate betting on the favorites because there is not enough meat on the bone to make my winning ticket taste good, but I will bet Larson based on what he said during NASCAR Media Day in February. Larson said he has unfinished business at the Bristol Dirt Race. His goal this year is to get the trophy Sunday night. I surely am not betting against the best dirt track driver in the field.

CHASE ELLIOTT (10-1):  William Byron drove the No. 7 truck to Victory Lane last week and then won the race Sunday in the Cup Series. Now Elliott will see if he can do the same. Elliott will get some extra seat time since he will be driving the No. 7 truck Saturday night. Elliott finished 10th in the Bristol Dirt Race last year. He said he has been working hard on his dirt track skills. Elliott is the only Hendrick Motorsports driver that has not won a race this year. I will bet that Elliott can keep HMS’s hot streak going this week.

TYLER REDDICK (14-1): Reddick was the first name I looked at when the odds for the Bristol Dirt Race came out. I was hoping to get Reddick at 20-1 odds but I guess I have to bet him at 14-1 odds. Reddick has a dirt track racing back ground and he has been running well this year. Reddick will be right up against the cushion making fast laps and passing other cars. Reddick is going to win a race this year. I will bet that it happens Sunday night.

RYAN BLANEY (16-1): Blaney has been the best driver this year and I doubt a little dirt is going to slow him down. Blaney’s teammate (Joey Logano) won this race last year. I will bet that Blaney can get the job down Sunday night. He started third and finished eighth at the Bristol Dirt Race last year. 16-1 odds are pretty good for a driver who has been up front in every race this year.

KYLE BUSCH (16-1): Joe Gibbs Racing has not been very good in the Gen-7 car this year. Busch has had consistent speed this year and has been their best driver. He was decent on the dirt last year and he should be good Sunday night. Most of the drivers said Bristol drove similar to a concrete track once the dirt was packed down. If that is true, the field might be in trouble Busch has eight wins at Bristol on concrete. I will bet Rowdy can add a dirt track win to resume Sunday night.

Long Shot Special: RICKY STENHOUSE JR. (25-1):  Stenhouse odds are not really a long-shot, but they are a lot longer than they should be. Stenhouse started 13th and finished second in the Bristol Dirt Race last year. He is one of the best dirt track racers in the field and he has a few second-place finishes on the concrete at Bristol too. We have seen a lot of surprise winners in 2022. I would not be surprised if Stenhouse punched his playoff ticket with a win Sunday night at Bristol.