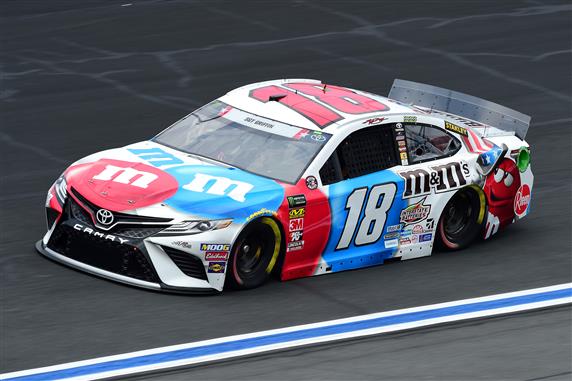 The Cup Series will compete at their home track this week in Charlotte, North Carolina. The Coca-Cola 600 is a long race (400 laps) and it takes a fast car, flawless pit crew and a bit of luck to get to Victory Lane. We have seen some long-shots win this race before. David Reuttimann won in 2009, Kasey Kahne won 2012, Austin Dillon won in 2017 and Brad Keselowski was 12-1 odds to win last year. It is going to be tough to beat the Hendrick Motorsports cars right now, but I will be taking some chances on some long-shots Sunday night. 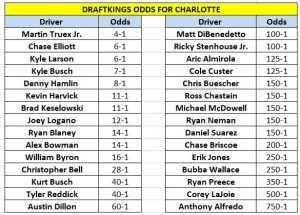 Here are my “Best Bets” for the race at Charlotte…

Kyle Larson (6-1): Hendrick Motorsports has won the last two races and they are showing no signs of slowing down. Kyle Larson has been their best driver and he has been the best on the 1.5-mile tracks this season. Larson won at Las Vegas, finished 2nd at Atlanta and 4th at Homestead. He is averaging 128 laps led per race on the 1.5-mile tracks this season. If his pit crew can avoid mistakes, Larson should be in Victory Lane Sunday.

Alex Bowman (14-1): Alex Bowman dominated both races at Charlotte last year. He led 164 laps and was on his way to Victory Lane when he had a flat tire at the end of the race. He came back three days later and led 51 laps and finished 2nd. The No. 48 team will likely bring the same setup to the track Sunday. Bowman has won 2 of the last 6 races this season. I will bet that he can make it 3 of the last 7 at Charlotte.

William Byron (16-1): I will stay in the Hendrick Motorsports garage with my third wager this week. William Byron has been the most consistent driver this season. He has finished the last 12 races in the top-11. This Charlotte, North Carolina native should have a good chance to win at his home track. He won at Homestead and finished the rest of the races this season on the 1.5-mile tracks in the top 10. I like having three Hendrick Motorsports cars in my betting portfolio this week.

Kyle Busch (7-1): Joe Gibbs Racing has been the closest team to Hendrick Motorsports this year and Kyle Busch has been their best driver over the last month. He won at Kansas (the most similar track to Charlotte), finished 3rd at Darlington and 10th last week at COTA (although he dominated most of the race). Busch has the best average finishing position this season on the 1.5-mile tracks (4.8) and the second-bet Driver Rating (behind Kyle Larson). Busch won the Coca-Cola 600 in the current aero package in 2018. I will bet he can do it again Sunday.

Tyler Reddick (40-1): I will be betting on Tyler Reddick because I just have a feeling this could be the week he gets his first win in the Cup Series. His teammate, Austin Dillon snuck into Victory Lane in the Coca-Cola 600 in 2017. This could be Reddick’s turn to win. He finished 2nd at Homestead and 7th earlier this month at Kansas. I will wager a few bucks on Reddick Sunday.

Long-Shot Special: My Long-Shot Special this week is Chris Buescher (150-1): The odds for Chris Buescher seem to be way off. I know Roush-Fenway Racing has not won at a 1.5-mile track since William Byron was in diapers, but I am willing to take a chance with Buescher. He finished 7th (Atlanta) and 8th (Kansas) in his last two races on the 1.5-mile tracks. With a gamble in the pits and the cautions going his way; Buescher could find his way to Victory Lane.