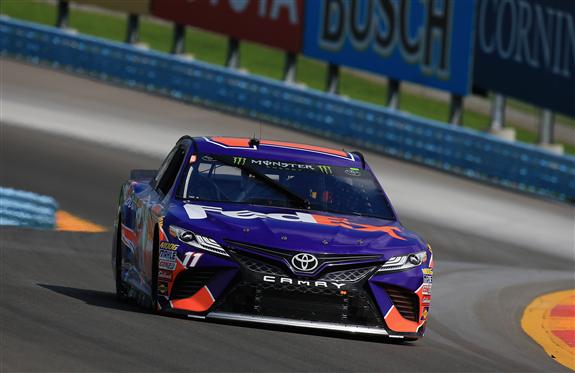 The three top series in NASCAR will all compete at Circuit of Americas (COTA) this week. This is the first trip to Austin, Texas for NASCAR so that means the drivers will have time to practice and there will be qualifying before the race Sunday.

While this is a new track for the Cup Series, there is one team that has a lot of experience at COTA. Haas F1 team has been competing at COTA since 2012 so that means Stewart-Haas Racing should have some data to use for this race. Tony Stewart was also very influential in bringing NASCAR to Austin, Texas. He ran some laps in a Cup Series car before the United States Grand Prix race in 2019 to prove the stockcars could compete on this track. He also ran some more laps a few months later. Some of the Stewart-Haas Racing drivers (Kevin Harvick, Chase Briscoe and Cole Custer) have had success at the road courses so I will be targeting this team with my “Best Bets” this week. 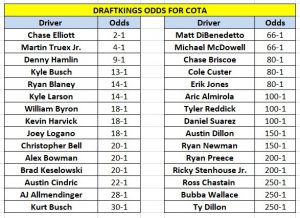 Here are my “Best Bets” for the race at COTA…

Kevin Harvick (18-1): Kevin Harvick has not been as fast in 2021 as he was last year, but the road courses are the equalizers in speed. Harvick will get some extra practice Saturday since he is competing in the Xfinity Series race. That extra seat time and Stewart-Haas Racing’s knowledge of the track should make Harvick a great bet at 18-1 odds. I will place a $20 bet on the No. 4 car to win.

AJ Allmendinger (28-1): AJ Allmendinger at 28-1 odds on a road course? I’ll take it. Allmendinger is clearly the best road course driver in the field. The only thing holding him back is his car. Richard Childress Racing prepared the No. 16 car for Kaulig Racing this week, so it should not be too far off on speed. If Allmendinger wins the pole (which I think he will), his odds will drop drastically. I will bet $20 on Allmendinger this week.

Kurt Busch (30-1): Kurt Busch has shown no signs of winning a race on an oval track so I expect Chip Ganassi Racing is putting a lot of effort into their car this week. It could be Busch’s best chance to win a race and secure a playoff spot. Busch is no stranger to running up front on road courses. He finished 4th in his last two road course races. Busch won at Sonoma before, so he has the talent to win Sunday. I will be $10 on Busch to win at COTA.

Michael McDowell (66-1):  There is no way Michael McDowell can win at 66-1 odds, right? Well, his odds to win the Daytona 500 were 66-1 and he found Victory Lane. I had a ticket on him in that race and I will use some of the profits to bet him again this week. I like that the No. 34 team has a win in their pocket and they can gamble on fuel strategy Sunday. McDowell finished 8th in the Daytona Road Course race. I will bet $5 on McDowell and hope he can take the checkered flag Sunday.

Chase Briscoe (80-1): One of the crew chiefs told me that he thinks Stewart-Haas Racing could show up with a lot of speed this week just because they have so much experience at this track with their F1 team. I also like the fact that two of the Stewart-Haas Racing drivers (Kevin Harvick and Cole Custer) will be competing in the Xfinity Series race Saturday. That is a lot of data for the No. 14 team to use for Chase Briscoe Sunday. Briscoe won on the road course at Indianapolis in the Xfinity Series last year. He also finished 3rd at Road America. He knows how to road course race. I will bet $5 on Briscoe to win Sunday.

Erik Jones (80-1): Erik Jones is one of the more underrated road course drivers in the Cup Series. He has finished seven of his 10 road course races in the top 10. The switch from Joe Gibbs Racing to Richard Petty Motorsports should not slow down Jones too much this week. He started 37th at the Daytona Road Course and drove his way through the field for a 13th place finish. If he can simply hang out in the top-10, he could find Victory Lane with a little luck. I will bet $5 on Jones to win at COTA.

Daniel Suarez (100-1): I know betting a Trackhouse Racing car to win may feel like you are throwing away your money, but so did betting money on a Front Row Motorsports car to win the Daytona 500. Suarez is a good road course racer. Many of the crew chiefs think COTA will race like Watkins Glen. Saurez finished 3rd and 4th at the Glen in 2018 and 2017. He also finished 16th in the Daytona Road Course race in February. That was only the second ever race for Trackhouse Racing. They learned a lot from that race and should be a lot faster Sunday. 100-1 odds are too good to pass up, so I will bet $5 on Suarez this week.

I bet $70 on the race at COTA. It will be a profitable race if any of these drivers can find Victory Lane Sunday.