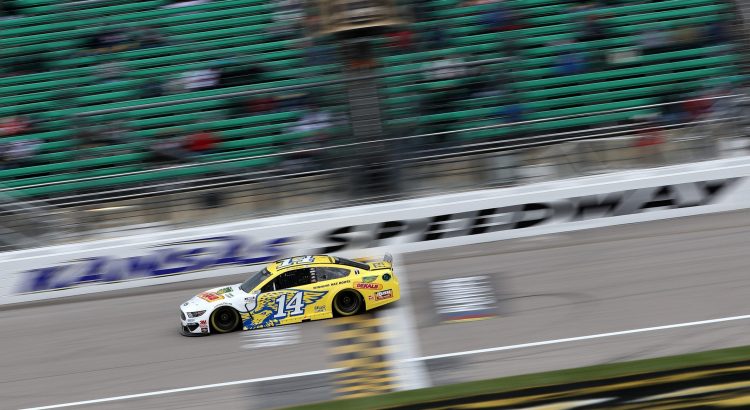 The Cup Series will travel back to Kansas this week for the second race in the Round of Eight. Kyle Larson punched his ticket to compete in the Championship Four at Phoenix. Will another playoff driver join him this week or will we have a driver from outside the playoffs spoil the party? The stats suggest that one of the favorites will win Sunday at Kansas.

The list of drivers who have won at Kansas using the 550 HP aero package mostly includes drivers who are still alive in the playoffs. Denny Hamlin has two wins (2019 and 2020), Chase Elliott (2018), Brad Keselowski (2019), Joey Logano (2018) and Kyle Busch (2021) each have wins at Kansas in the current aero package. Kevin Harvick (2018) is the only driver outside the playoffs to win at Kansas in the current aero package. The only driver with odds greater than 25-1 to win on a 1.5-mile track this season was Kurt Busch when he took the No. 1 car to Victory Lane at Atlanta at 30-1 odds. 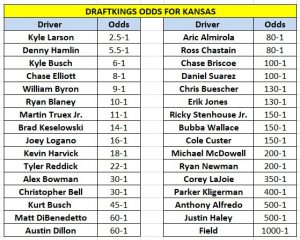 ** The first number is the amount of money based on the second number (the amount of the wager). So if you bet $1 on Kyle Larson you will win $2.50.

Here are my Best Bets for the Hollywood Casina 400…

Kyle Busch (6-1): Kyle Busch won the Buschy McBusch 400 on his birthday at Kansas in June. Everything lined up for him to go to Victory Lane on that day. Can he do it again? The key for the No. 18 car to run well is to hit on the right setup when they unload off the hauler. The No. 18 team hasn’t been as good as the other teams at making adjustments throughout the race. They should have the notes to bring a fast car to Kansas. Busch finished his last two races at Kansas in the top-five. He will have no problem moving drivers out of the way to punch his ticket to Phoenix.

Chase Elliott (8-1): Chase Elliott has not won on an oval this season so why should I bet on the No. 9 car this week? Hendrick Motorsports proved that they have the speed to win on these tracks. Will their focus shift from the No. 5 car to the No. 9 car this week since Kyle Larson is already locked into the Championship race and Alex Bowman and William Byron are not competing for a championship? I think so. Elliott got hot in this round last year. He could start off his defense of his championship with a win at Kansas.

Brad Keselowski (14-1):  Brad Keselowski won the first race I ever went to at Kansas by stretching the fuel mileage 10 laps further than anyone thought he could (in 2011). The No. 2 team has been fast on the 1.5-mile tracks and they are the best at using pit strategy to their advantage. Keselowski took four tires at the end of the race in June. It allowed him to pass many of the cars in the top-10 and finished 3rd. If he had a few more laps Keselowski would have won the race. He is a good bet at 14-1 odds Sunday.

Kevin Harvick (18-1): Kevin Harvick seems to be extra motivated right now to get to Victory Lane before the season ends. The No. 4 team would like nothing better than to play spoiler in the playoffs. He proved last week at Texas that he is not going to give the playoff drivers any room on the track. Harvick finished 2nd at Kansas in June. I just need him to improve by one spot Sunday in order to cash a large ticket at 18-1 odds.

Long-Shot Special: My long-shot special this week will be Tyler Reddick (22-1). Reddick was my long-shot pick last week at Texas and he nearly came through for me. Reddick was running second with only 20 laps to go in the race but the late cautions allowed the field to catch up with the No. 8 car. Reddick was also good at Kansas in May. He started 11th and finished 7th. He just needs some luck to get his first win in the Cup Series. I will take my chances with this young driver Sunday.