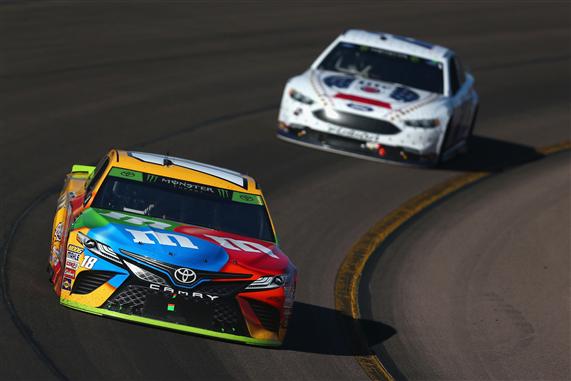 So far the “Best Bets” are off to a good start. Michael McDowell took the checkered flag and won me a lot of money in the Daytona 500 at 60-1 odds. Last week I recommended Kyle Larson at 10-1 odds and he was able to park the No. 5 car in Victory Lane. We usually do not see surprise winners at Phoenix so it may be more difficult to hit on a long shot. That does not mean there is not some good value picks in the field. 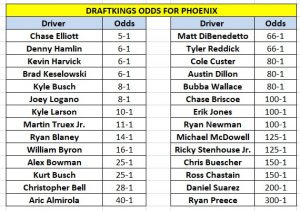 ** The first number is the amount of money based on the second number (the amount of the wager). So if you bet $1 on Chase Elliott, you will win $5.

Kyle Busch (8-1): Kyle Busch only went to Victory Lane once last year. Will the No. 18 car only visit Victory Lane once in 2021? If Rowdy only wins once race this year, it could be this week at Phoenix. This tracks ranks as his best. Busch has finished 11th, 3rd, 2nd, 1st, 1st and 2nd in the current aero package at Phoenix. That is an average finishing position of 3.3. He has also averaged 81.8 laps led in those races. Busch will have some momentum after his 3rd-place finish last week. He is a good pick at 8-1 odds.

Joey Logano (8-1): Joey Logano has been the best driver at Phoenix over the last two seasons and I am surprised he is not listed as the favorite. Logano started 13th, led 60 laps and won this race last year. He came back to the track for the championship race and led 125 laps and finished 3rd. Team Penske dominated the short, flat tracks last year so I want to put some money on one of their drivers. I do not trust Ryan Blaney and I get better odds with Logano over Brad Keselowski. I will not be surprised if the No. 22 car is back in Victory Lane Sunday.

Kyle Larson (10-1): I put $10 on Kyle Larson to win last week and his win put a nice Benjamin Franklin in my pocket. I will take some of my winnings and double-down on Larson this week. He has never won at Phoenix before but he has also never finished outside the top-six in the current aero package at the track. Larson starts second, and the extra horsepower he will have in his Hendrick Motorsports Chevy should be enough to get the No. 5 car back to Victory Lane.

William Byron (16-1): Last week I loaded up on the Hendrick Motorsports drivers in my “Best Bets” article and it paid off. I am going back to HMS this week. Byron is no stranger to Victory Lane at Phoenix. He won the Xfinity Series at the track in 2017. He also finished both races in the Cup Series last year at Phoenix in the top 10. Byron is on a hot streak this year so I will take a gamble with him surprising everyone and making another trip to Victory Lane.

Long-Shot Special: My Long-Shot Special this week is Christopher Bell (25-1). I am not going too deep into the field for my long-shot pick this week. I do like the odds for Bell though. He has had a good start to the 2021 season with a win at the Daytona Road Course and a seventh-place finish last week. Bell will start fourth Sunday, so he will have the track position to get to the front. His best finish at Phoenix in the Cup Series is 17th, but he has never had a car like he will have from Joe Gibbs Racing this week.