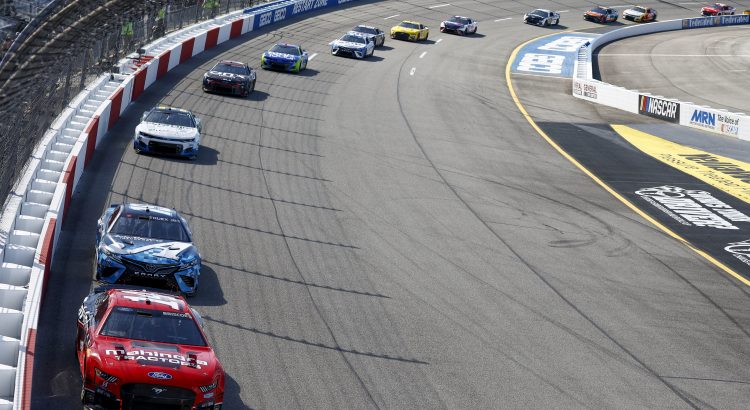 The NASCAR Cup Series will compete at Richmond Raceway this week. This is race No. 24 on the Cup Series schedule and that means there are only three races left before the playoffs start at Darlington next month. Will we have another first-time winner this week? There is a good chance that could happen, but I do not expect many long-shots to be up front at Richmond. The top teams typically dominate this race. The Federated Auto Parts 400 can be seen Sunday at 3 p.m. ET on USA Network..

Handicapping the races this year has been difficult. The Gen-7 car has brought the well funded teams back to the pack and given the lower-funded teams a chance to compete. The race at Richmond should be easier to predict than some of the other races. There have been five races on flat tracks similar to Richmond, so we have a lot of notes to work with. I will be betting on the drivers who have run well at Phoenix, Richmond, Martinsville, Gateway and New Hampshire this year. 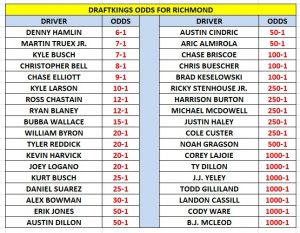 ** The first number is the amount of money based on the second number (the amount of the wager). So if you bet $1 on Denny Hamlin, you will win $6.

Here are my best bets for the Federated Auto Parts 400…

MARTIN TRUEX JR. (7-1): Truex had to be crushed to see Kevin Harvick win last week. Now the No. 19 team is on the outside, looking in at the playoff field. A trip to Richmond should cure his playoff blues. Truex has finished 4th, 1st, 5th, 2nd, 1st, 1st and 3rd at Richmond since he joined Joe Gibbs Racing. That includes 80 laps led, 17 Stage Points and a fourth-place finish in April. JGR will put a lot of their efforts in getting the No. 19 car to Victory Lane Sunday.

CHRISTOPHER BELL (8-1): Bell won the last race on a flat track at New Hampshire. He also led 63 laps, scored 14 Stage Points and finished sixth at Richmond in April. An argument could be made that Bell has been the fastest driver for Joe Gibbs Racing this year. I would not be surprised to see his hot streak continue with another trip to Victory Lane Sunday.

CHASE ELLIOTT (9-1): I thought there could be a chance that Elliott would be one of the favorites this week but DraftKings decided to go with the Joe Gibbs Racing cars. That is understandable because JGR has been fast on the flat tracks, but so has Elliott. He finished second at New Hampshire last month. Elliott has been on a hot streak this summer so I will bet him at 9-1 odds this week.

RYAN BLANEY (12-1): Blaney still has a spot in the playoffs since he is No. 2 in the Point Standings, but that will change if a new driver wins one of the last three races. The No. 12 team is viewing this race as a “must win situation.” Blaney could get the job done Sunday. He led a race-high 128 laps and scored 16 Stage Points at Richmond in April. Team Penske has two cars in the playoffs, so they will be focused on getting the No. 12 to Victory Lane Sunday.

JOEY LOGANO (20-1): Richmond is one of the better tracks for Logano. His average finishing position in his last six races at the track is sixth. Logano won the race on the flat track at Gateway, he finished second at Martinsville and eighth at Phoenix. Logano has had a habit of sneaking into Victory Lane this year so I will bet he can do it again Sunday.

LONG SHOT SPECIAL WILLIAM BYRON (20-1): His odds are not the longest in the field, but they are long enough to capture my attention. Byron was the best driver on the flat tracks early in the season. He led 122 laps in the last race at Richmond and finished third. He also led 212 laps and won the race at Martinsville. Can the No. 24 team find the speed they had early in the season? Byron will be a threat to win if they can. Shop around to see if you can find better odds, but 20-1 is not too bad for the best car in the last race at Richmond.