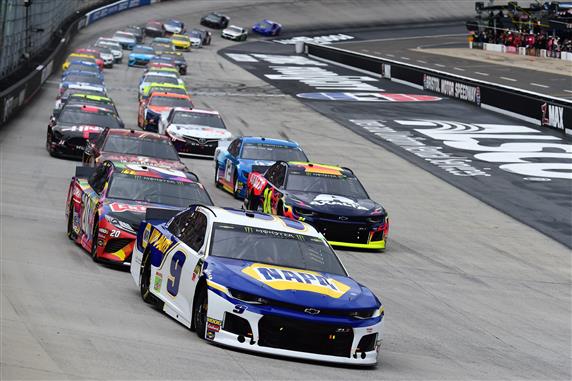 The best way to predict the future is to evaluate the past. The Cup Series last competed at Bristol Motor Speedway in August of last year. Here are my notes from that race…

Bristol August 2019: The track applied traction compound at the bottom of the track. This provided for more grooves for the drivers to run in. The drivers were surprised how much grip it had. The top lane came in later in the race and gave the drivers multiple passing lanes. The Bass Pro Shop NRA 500 was one of the best short track races in 2019.

There were 8 cautions in the race and two of them were for the end of the Stages. Usually we have a lot of cautions at Bristol but the 2019 aero package slowed down the cars. That will not be the case this week. The Cup Series will use the 2017 -2018 aero-package from Bristol for this week’s race.

* There was a caution with 6 laps left in Stage 2. Some teams stayed out at the end of Stage 2 to earn Stage points while other drivers running up front decided to pit.

– Denny Hamlin won the pole for the last race at Bristol. The No. 11 car took the early lead and he started to lap cars after only 12 laps. Hamlin was involved in a wreck with Jimmie Johnson and Austin Dillon on lap 79. He worked his way back inside the top 10 but Hamlin had to pit on lap 187 for a loose wheel. The No. 11 team kept working on the car and at the end of the race Hamlin had the fastest car. He passed Matt DiBenedetto on lap 11 to go to Victory Lane.

– Kyle Larson was the first driver to go to the top of the track. He used the top lane to take the lead from Hamlin on lap 14. Larson dominated Stage 1. Larson got into Brad Keselowski on the restart on lap 370. It caused a fender to rub and Larson had to pit. The No. 42 team was able to recover and finish 6th. Matt Kenseth will drive this car Sunday.

– Martin Truex Jr. started 3rd. He battled Denny Hamlin and Kyle Larson for the lead in Stage 1. Truex took the lead in Stage 2 and led 52 laps. Truex had some problems in the pits and lost some track position. The No. 19 car was faster than the 13th place finish they had.

– Matt DiBenedetto qualified 7th in the under-funded car from Leavine Family Racing. He ran most of the race in the top 10. His average running position was 5.42 (3rd-best). The No. 95 team had a fast pit stop at lap 380 and got DiBenedetto up the 2nd position. He quickly took the lead from Erik Jones and DiBenedetto led a race high 93 laps. DiBenedetto was passed by Denny Hamlin with 11 laps to go in the race. DiBenedetto ended up finishing 2nd.

– Kevin Harvick started 8th and his car was one of the best on the long runs. He lost 3-4 spots at each restart, but he gained the positions plus a couple more after the long run. The No. 4 car was the fastest at the top of the track. Harvick took the lead from Chase Elliott on lap 165. The No. 4 car was able to lead 28 laps. Harvick had his clutch go out on lap 291. It ended it his race.

– Chase Elliott qualified 6th and he slowly moved his way up in Stage 1. He won the race off of pit road to start Stage 2. Elliott went on to lead 33 laps in Stage 2. The No. 9 car ran in the top 5 in the final Stage but his car was not fast enough to keep up with Denny Hamlin and Matt DiBenedetto. Elliott finished 5th.

– Kyle Busch started 31st. He could barely hold onto the car early in the race. His car was way too loose. Hamlin lapped Busch on lap 86. Busch finally got back on the lead lap on lap 219. Adam Stevens decided to gamble and Busch took the lead on lap 260 when he decided to stay out while the rest of the field decided to pit. He led 30 laps on his old tires. Busch finished 4th but had one of the best cars at the end of the race.

– Ryan Blaney fought a tight racecar in Stage 1. The team worked on it and the car came to life in Stage 2. He was one of the best drivers at the top of the track. Blaney spent a lot of time running in the top 5 until he had a tire go down in the final Stage. Blaney finished 10th.

– Kurt Busch qualified 4th but his car was way too loose. He fell to 10th early in Stage 1. The No. 1 car gained a lot of spots on pit road late in Stage 2. Busch passed Martin Truex Jr. for the lead to win Stage 2. He spent the final Stage running around the 12th position. He was able to gain a few more spots and finish 9th.

– Joey Logano started 11th and he was running 8th when he had a tire go down on lap 69. The pit crew had problems changing the tire and Logano went 3 laps down. Logano was involved in a few more incidents and never got his track position back.

– Brad Keselowski qualified 13th and he consistently ran in the top 10. His average running position was 5.81 (4th best) and his Driver Rating was 114.3 (5th best). Keselowski was able to take the lead from Kyle Busch on lap 267 and he led 91 laps (the 2nd most). Keselowski brought the Blue Deuce home in the 3rd position.

– Jimmie Johnson was fast in practice but he was running 20th in Stage 1 when he was trying to stay on the lead lap. Johnson got loose and ran into Austin Dillon and the race leader (Denny Hamlin). Johnson went 2 laps down. Ryan Blaney got loose on lap 379 and took out Jimmie Johnson, Ricky Stenhouse Jr. and Michael McDowell. It was not a good night for “Seven Time.” He finished 19th.

– Erik Jones had the best long-run car in practice. His car was also very good on the long runs in the race. Jones qualified 9th, he led 23 laps and finished 7th in both Stages. Jones was really good at the top of the track. He got into Matt DiBenedetto on the restart at the end of the race. It caused him to fall back in the field and finish 22nd.

– Clint Bowyer got loose in qualifying so he had to start 20th. It took him a long time to work his way through traffic. His car got better throughout the race. The No. 14 car ran in the top 10 after Stage 1. Bowyer was running 7th in Stage 2 when Quinn Houff got loose and spun out Bowyer (Laps 277). He ran the high-line to gain positions and finish 7th.

Alex Bowman did not have a good race. He qualified 10th and fell outside the top 10 early in Stage 1. He had a hard time making up track position. Bowman got loose on lap 366 and got into the wall. Joey Logano slammed into the back of his car and caused a lot of damage. Bowman was able to gut it out and finish 15th.

– Ricky Stenhouse Jr. qualified 15th. He raced his way inside the top 10 in Stage 2. Stenhouse was running 18th when Ryan Blaney got a flat tire and forced the No. 47 car into the wall (lap 379). It killed Stenhouse’s car.

– Aric Almirola qualified 5th and he quickly fell back through the field. He got loose on lap 189 and got into the wall. He had a lot of damage to the right rear of the car. Almirola finished 29th.

– Austin Dillon had a tire go down on lap 79. He hit the wall and Jimmie Johnson during the wreck. He got into the wall again on lap 97. It was a horrible night for Dillon. The No. 3 car finished 34th.

– Ryan Newman ran 9th in the spring race and he came back with a fast car in the Night Race. Newman qualified 14th and ran the bottom of the track. He made it very hard for other cars to pass him. He finished 11th in the race.