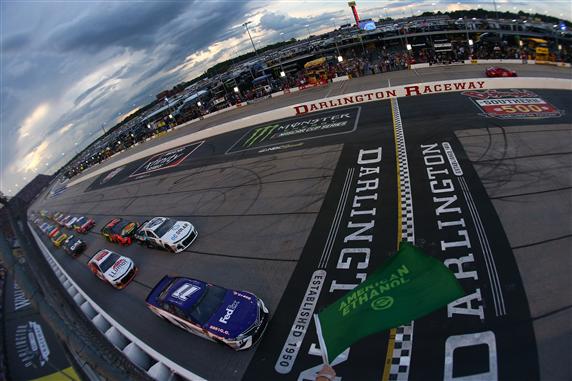 NASCAR returns this week after a 71 day shut down because of the Covid-19 virus. The Fantasy NASCAR picks got off to a hot start and we need to pick up where we left off. The best way to do that is to evaluate what happened the last time the Cup Series visited Darlington. I will now include a recap of each prior race at the track the series is competing at. This should help you determine which drivers are the best for your team.

– The Track: Weather played a big factor in many races in 2019 and the Southern 500 was one of the races that were delayed because of rain. The race started late Sunday night and finished Monday morning. Whenever NASCAR stops a race, it ruins a driver’s momentum and can help other drivers who desperately needed to hit the “reset” button. That is what we had last year at Darlington.

The Southern 500 is one of the longest races on the circuit and the track wears out tires as much as any surface on the schedule. It was very important for drivers to manage their tires and for the cars to be able to maintain speed on the long-runs. Be sure to look at the “long-run” speed in practice for your picks this week.

– Martin Truex Jr. won the race at Darlington in 2016 but the track is his 18th best (out of 23 tracks). His average finishing position at the Track Too Tough to Tame over the last 5 seasons is 14.2. Truex qualified 22nd and made his way to the top-10 in Stage 1. His car was not good on the long-runs and Truex finished 15th.

– Kyle Busch had to start from the rear because the No. 18 team decided to change their engine after final practice. It did not take long for Busch to pass cars. He was running in the top 10 after only 35 laps. He finished 4th in Stage 1 before taking the lead on lap160. Busch led a race-high 118 laps, won Stage 2 and finished 3rd in the race.

– Denny Hamlin has been good at Darlington over the last 5 seasons, but last year was one of his worst finishes. The No. 11 car spent most of the race running in the top 10. Hamlin finished 5th in Stage 1 and 3rd in Stage 2. He did not lead any laps but he had a fast car on the long runs. Unfortunately, Hamlin was caught up in a wreck on lap 276. The damaged car finished 29th.

– Erik Jones came into the race having to answer questions about the possibility of Christopher Bell taking over his seat in 2020. Jones quieted the critics with his performance in the Southern 500 last year. The No. 20 car qualified 15th and quickly made it into the top 10. Jones finished 10th in Stage 1 and 4th in Stage 2. He took the lead from Jimmie Johnson on lap 327 and went on to Victory Lane.

– Brad Keselowski drove the Miller Genuine Draft car and it was very fast. He qualified 2nd and took the lead from William Byron on the first lap of the race. Keselowski led 19 laps and finished 7th in Stage 1. He had a 5.92 average running position (3rd best) and finished 5th in the race.

– Joey Logano entered the race battling Kyle Busch for the regular season point’s lead. The strategy for the No. 22 team was to score as many points as possible and simply finish in the top 10. Logano spent most of the race running around the 15th spot. His No. 22 Ford was just plowing tight all night. Todd Gordon set the car for the daytime and the weather delay that made it a night race screwed their plans. Logano finished 14th in the race.

– Ryan Blaney was in the same boat at Joey Logano. His crew chief set the car up for a hot, slick track. The race being delayed 4 hours and starting in the dark ruined their setup. Blaney qualified 10th and had a 14.02 average running position (15th best). Blaney was only able to finish in the 13th position.

– Kevin Harvick has been the most consistent and the safest driver for Fantasy NASCAR teams when the Cup Series competes at Darlington. To say he has tamed the Track Too Tough to Tame is an understatement. Harvick has a 4.2 average finishing position in his last 7 races at the track. The No. 4 car qualified 11th, did not lead any laps but finished the race in the 4th position.

– Clint Bowyer entered the race at Darlington with a history of poor performances at the track. Bowyer finished 36th and 40th in his first two races at Darlington while driving for Stewart-Haas Racing. He had his best finish of his career at the track though last year. Bowyer qualified 13th and made his way inside the top 10 in the final Stage. Bowyer led 1 lap and finished the race in the 6th position.

– Aric Almirola had to start in the back after he wrecked his primary car in final practice. Almirola did not have much luck passing cars early in the race. His crew chief said his tires were wearing down to the cords after a long run. The team made some adjustments but they did not help. Almirola had a 22.52 average running position (22nd best) and finished the race in the 17th position.

– Chase Elliott started the race in the No. 9 NAPA Auto Parts throwback scheme. The No. 9 car qualified 8th and the he ran in the top 10 in the first Stage. He dropped the anchor around the 12th position in Stage 2 and that is where he ran the rest of the race. Elliott lost some position at the end of the race and finished 19th.

– William Byron had the best paint scheme and a fast car at the beginning of the race. The No. 24 Days of Thunder Chevy Racing car won the pole. Byron was fighting a tight race car and slowly lost positions throughout the race. Byron did not lead any laps despite winning the pole and he finished 21st.

– Alex Bowman has a history of running poorly at Darlington. His average finishing position at the track is 23.5 and his race at the Track Too Tough to Tame was not very impressive last year. Bowman qualified 16th and he had a 13.07 average running position in the race (14th best). The No. 88 car was too tight in the final Stage and Bowman finished 18th in the race.

– Jimmie Johnson entered the race on the playoff bubble so he needed as many points as possible. He got them. Johnson qualified 6th and he finished 2nd in Stage 1 and 7th in Stage 2. He was leading the race with only 40 laps to go but he was involved in a wreck on lap 281 (It was not his fault) and he finished 16th.

– Kyle Larson had the best car in the race. That should not surprise anyone since Darlington ranks as 2nd best track for Larson. The No. 42 car qualified 3rd, had a race-high 4.31 average running position, led 44 laps, finished 3rd in Stage 1, 5th in Stage 2 and finished 2nd in the race. The Chip Ganassi Racing Chevy’s were the cars to beat at Darlington last year. Matt Kenseth will pilot the No. 42 car Sunday but he is likely to be a bit rusty since he has not driven in the Cup Series since the race at Homestead in 2018. He did run well at Darlington when Kenseth drove for Joe Gibbs Race (Kenseth finished 6th in his last 2 races at the Track Too Tough to Tame).

– Kurt Busch had the 2nd best car in the race (behind his teammate Kyle Larson). Busch qualified 4th and spent most of the race running in the top 5. Busch won the first Stage and finished 2nd in Stage 2. Busch led 94 laps (2nd most behind his brother Kyle) and finished 7th in the race. Busch has a 5th-place average finishing position in his last 3 trips to the Track Too Tough to Tame. This is one of his best tracks.

– Ryan Newman has only been “OK” at Darlington in his career. His average finishing position at the track is 12.57 and he has never won a race at Darlington in his 21 starts. Last year was not a good run for the No. 6 car. Newman qualified 24th and he was running just inside the top 20 when he was involved in an accident on lap 142. The damage caused Newman to finish the race in the 23rd position.

– Ricky Stenhouse Jr. has never finished a race at Darlington in the top 10 and he did not come close last year. Stenhouse qualified 21st and he had a 28.21 average running position (28th best). The car had no speed and wore the tires to the cords. Stenhouse finished the race in the 33rd position.

– Chris Buescher had a good race at Darlington last year but that should not surprise anyone. The Track Too Tough to Tame is the best track for Buescher. He has a 14th-place average finishing position at Darlington. Last year Buescher qualified 12th, had a 13.03 average running position (13th best) and finished 12th. It will be interesting to see how Buescher’s success at the track and Roush Fenway Racing’s struggles at Darlington plays out Sunday.

– Austin Dillon is always better at Darlington than he is at most of the other tracks. The Track Too Tough to Tame ranks as the 2nd best track for Dillon. He has a 10.4 average finishing position in his last 4 starts at Darlington. He was decent again at the track last year. Dillon qualified 14thand finished 10th. This is a good track if you want to gamble with Dillon.