The PGA Tour Playoffs have reached the second round. There are only 70 golfers left who are competing for a chance to win the $15M prize next week in the Tour Championship. This is a unique event for DFS Golf because the field is so limited (only 70 golfers in the field) and there is no cut. That means each golfer will have higher than normal ownership. I found it to be more difficult to win in DFS in these last two tournaments of the season because the difference between winning big and not cashing is usually just a few points. You almost need to be perfect this week.

The second round of the FedEx Playoffs will be contested at Wilmington Country Club South Course, in Wilmington, Delaware. This may be the biggest sporting event to ever be played in the city and they will ensure the course is in perfect shape for the top-70 golfers on the PGA Tour.

Wilmington C.C. was designed by Robert Trent Jones and opened in 1959. The course will play 7,534 yards in length and will be scored as a par 71. This is a new course for the tour so course history will not come into play.

The fairways are lined with trees and the greens are guarded by numerous bunkers. The course is long enough that distance off-the-tee will be important but so will accuracy to stay out of the rough and trees.

The greens are absolutely huge and easy to hit in regulation so Shots Gained Approach will not be as important this week. The greens are Bentgrass this week so that means Shots Gained Putting (Bentgrass) will be important. The players better be in good form if they want a chance to compete at East Lake next week. 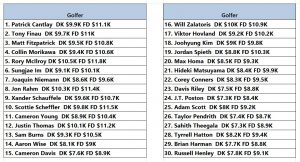 We are going to need to get creative with our lineup construction in a 70-player field with no cut. All of the golfers will have higher than normal ownership so we MUST find the players who will have lower ownership and finish in the top-15. We will have to get all six of our golfers inside the top-15 in order to win out Tournament Contest this week because the scoring will be so tight (meaning the difference between winning and losing will be one point and the difference between winning a lot and winning less will be 10 points).

I expect most people will chase the points for the first FedEx Playoff event. Jon Rahm, Collin Morikawa, Matthew Fitzpatrick, Tony Finau and Will Zalatoris all finished in the top-five last week. They will be fine plays for Cash Contest but I will be fading them. I will pivot to Rory McIlory and Scottie Scheffler who missed the cut and Xander Schaufflele and Patrick Cantlay who both finished 57th. These golfers burned a lot of people (including me) last week. They already knew they were locked into the second round of the playoffs so they did not have a lot to play for. I will be building most of my Tournament Contest lineups around these golfers and fading the players who finished at the top of last week’s leaderboard.

My Cash Contest strategy will be to select six golfers who I think can finish in the top 20. That is what it is going to take to win your Cash lineup this week. 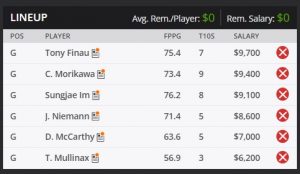 TONY FINAU ($9,700): Every year we see a golfer get hot right before the playoffs and then cruise to the BIG CHECK at East Lake. Patrick Cantlay did it last year and it looks like Finau has a good chance to do it in 2022. Finau finished 5th last week and won the two tournaments heading into the playoffs. He leads almost every stat category over the last 16 rounds so there is no reason to fade him in Cash Contests (He will be too highly owned for tournaments though).

COLLIN MORIKAWA ($9,400): Morikawa hasn’t been the dominant golfer we have seen in the past but he is heating up this week. The BMW Championship has a history of tuning into a birdie fest and Morikawa was second in the field in birdies made last week (behind Lucas Glover). Morikawa is a great ball-striker who should score well in Deleware.

SUNGJAE IM ($9,100): If Tony Finau is the best golfer on tour right now, Sungjae is a close second. He finished 12th last week and he finished 2nd in his two tournaments heading into the playoffs. Im ranks No. 4 in my key stats. He should be a safe play with the upside to win Sunday.

JOAQUIN NIEMANN ($8,600): Niemann is going to be a great play if the PGA Tour sets up this course for high scores this week (that is typically what they do in the BMW Championship). Niemann ranks No. 2 behind Tony Finau in Birdie or Better %. Niemann knows how to stack birdies on the scorecard and that will be important this week. I like the Chilian for Cash and Tournament Contests this week.

DENNY MCCARTHY ($7,000): The key to scoring in golf is to have a hot putter. Golfers cannot score a lot of birdies and eagles if they cannot putt, so why not take a chance with the golfer who ranks as the No. 1 putter on tour? It all comes down to ball-striking for McCarthy. Usually he has some difficulty hitting greens in regulation, but the greens this week are some of the biggest the golfers have ever seen on tour. Once he gets it on the green, McCarthy should have no problem rolling it into the hole.

TREY MULLINAX ($6,200): I never play a golfer who is priced at $6,200 in my Cash Contest lineup, but this week is different. This is a no-cut event, so Mullinax is guaranteed to play all four rounds. His form is good (Mullinax finished 5th last week and won the Barbasol last month). He is going to be highly owned so even if he struggles, it will not hurt us too much. There is no reason to fade Mullinax in Cash Contests this week. 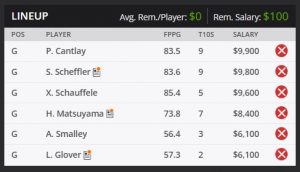 SCOTTIE SCHEFFLER ($9,800): The No. 1 golfer in the FedEx Points Standings heading into the playoffs has lost his form. Scheffler missed the cut last week and now his ownership is going to be very low. Scheffler had a spot in the tournament final wrapped up before the FedEx Playoffs began, so was he really trying last week, or was he simply working on his game. Scheffler did not forget how to play golf over the summer. I will take a chance the No. 1 golfer in the World Golf Rankings.

XANDER SCHAUFFELE ($9,600): There is a rule in Fantasy Golf… When it is a small field with no cut, play Xander Schauffele. He understands that he is guaranteed four rounds of golf so he often goes pin hunting in these tournaments. His ball-striking is so good that it often works out for him. He finished 57th last week so that should chase away some of his ownership. Like Scottie Scheffler, Schauffele already had a spot in the finals wrapped up, so was he trying last week? He won two of his last four tournaments. He has the upside to win again Sunday.

HIDEKI MATSUYAMA ($8,400): Do you want a golfer who no one will one? I give you Hideki Matsuyama. He has been a mess this summer. Matsuyama had a WD last week, finished 68th before that and Missed Cut before that. So why in the world would I play Matsuyama this week? His ownership is going to be 5% or less. He usually plays well when he shows up in the playoffs. Matsuaya finished 3rd in 2020 and 3rd in 2019 in the BMW Championship. There is a good chance Matsuyama does not even play or plays horrible, but there is also a good chance he finishes in the top-five with 5% ownership. Matusyam likes money, so I think he shows up to play this week.

* If Hideki Matsuyam does WD, pivot to Max Homa (Homa is a much safer play)

ALEX SMALLEY ($6,100): My Tournament Contest lineup is the “Limbo Lineup.” How low can you go…. I am going all the way to the bottom of the salary list and playing two golfers with a lot of upside this week. Smalley is playing with house money. He is not supposed to be here. He has finished 3 of his last 5 tournaments in the top-20. He has nothing to lose so Smalley should play aggressively with a chance to score well Sunday.

LUCAS GLOVER ($6,100): The key to winning the BMW Championship will be to score a lot of birdies. Glover lead the field in birdies made last week and he finished 3rd. Can he do it again? Like Alex Smalley, Glover was not supposed to be here. He is also playing with house money. He will be flag hunting once again. It worked for him last week and I will trust that it will work again this week. 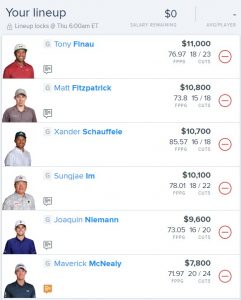 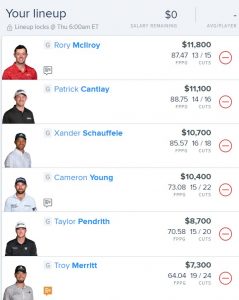 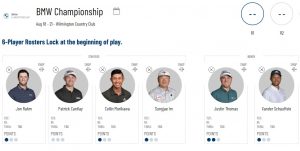 * This is the 11th tournament of 12 tournaments in segment four. Golfers are eliminated from the playoffs if they do not make it into the top-30 this week. I do not plan to save allocations in the playoffs. I am simply playing the best lineup I can and I will figure out the next tournament, next week.