The PGA Tour will travel across the pond this week for the Genesis Scottish Open. This tournament will give the golfers to practice their game on a links style course before they tee it up in the Open Championship next week. Be sure to have your lineups set before bedtime Wednesday because the tournament begins Thursday at 1 a.m. ET. (For some reason DraftKings says lineup lock is at 5 a.m ET Thursday. They will likely change that time)

The Genesis Scottish Open has a stacked field. Some of the golfers entered into the Scottish Open includes: Scottie Scheffler, Jon Rahm, Collin Morikawa, Justin Thomas, Cameron Smith, Patrick Cantlay, Victor Hovland, Xander Schauffele, Matthew Fitzpatrick and Sam Burns. It should be a fun tournament to play a DFS contest in.

The Genesis Scottish Open will be played at the Renaissance Club in East Lothian, Scotland. This is a new course (it opened in 2008) and it has been the home of the Scottish Open since 2019. The Renaissance Club is a par-71 which plays 7,293 yards in length. It is a links style course which will require the correct ball placement in the fairways and creativity on the greens.

The Renaissance Club sits right on the course so the weather can affect play. Right now it looks like the winds will be gusty and not too much rain. Golfers who can scramble well usually play well here.

– Stroke Gained Off the Tee 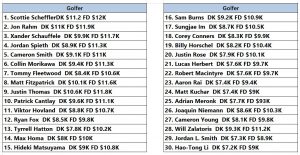 There are a lot of good golfers in the higher price range this week. The key to building a winning DFS lineup will be to find the higher priced golfers who can score well on a links style course and pair them with some of the DP World Tour (European Tour) golfers who may be lower owned. Typically the golfers who play well in the Irish Open, also play well in the Scottish Open. I will be looking at the results from the Irish Open for my picks this week.

A contrarian way to build lineups this week will be to build balanced lineups. We have seen in the past at the Scottish Open that a lot of the DP World Tour players dominate the top of the leaderboard. I will be building some lineups where I fade the $10K+ range and sticking to the lower-$9K through upper $7K ranges. 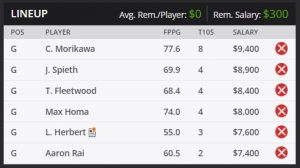 COLLIN MORIKAWA ($9,400): So you are telling me I can have the defending Open Champion and a golfer who just finished 5th in the U.S. Open for $9,400? I will take it… I know Morikawa finished 71st in this tournament last year but he said he was trying out different shots to see what works on links style courses. He must have figured something out since he won the Claret Jug the next week in the Open Championship. I am sure Morikawa will apply what he learned last year to the Scottish Open this week.

JORDAN SPIETH ($8,900): DraftKings is going to have to explain to me why one of the best links style golfers in the world is priced at $8,900 this week. I am sure it is because of his missed cut at the Travelers, but this is a completely different style of tournament.  Spieth is playing this course for the first time, so there is a bit of concern, but he finished four of his last six Open Championships in the top-15. The dude is the most creative around the greens.

TOMMY FLEETWOOD ($8,400): Fleetwood is really good in DP World Tour events. He lost in a playoff in the Scottish Open in 2020, so he has good course history. He also won the Open Championship in 2019 so he is good on links style courses. His form doesn’t look great on paper, but when you look at what Fleetwood has done in Europe, he looks a lot better.

MAX HOMA ($8,000): Homa is not the first golfer that comes to mind when people think about links style golfers, but I am picking him because of his form. Homa has made 10 cuts in a row and has made 11 of 12 cuts this season. He is smart enough to figure out this course and play well in Scotland.

LUCAS HERBERT ($7,600): Everything is setting up for Herbert to play well this week. He finished 9th last week in the Irish Open and he has finished 4th in his last two trips to the Genesis Scottish Open. You would think that a golfer who has consecutive top-fives in a tournament would be higher priced, but I will take the discount. Herbert loves this tournament and he has never missed a cut here. He should be a safe play this week.

AARON RAI ($7,400): Rai is not a golfer I play a lot in the U.S.A., but he should be good golfer for your lineups in the Genesis Scottish Open. He won this tournament in 2020 and finished 8th in 2018. Rai also finished 9th last week in the Irish Open. He is good on the links style courses so I will use him this week. 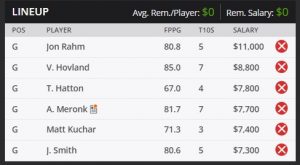 JON RAHM ($11,000): Scottie Scheffler is probably the safer play up top, but I will roll with Rahm. He always gets fired up to play in European events. Rahm finished 7th in this tournament last year and 3rd in the Open Championship. Rahm told the Golf Channel this week, “The Renaissance Course was designed by Tom Doak who designed a lot of the courses in Spain. This course is similar to the courses I grew up playing. I am playing this week because the course really fits my game.” Sounds good to me.

VICTOR HOVLAND ($8,800): Everything I have read this week has said, “Play Jordan Speith.” I have not read one article or heard one podcast were people were talking about Hovland. I will pivot from a super-chalk Spieth and use Hovland. It wasn’t long ago people were talking about Hovland as the next No. 1 golfer in the world. Maybe a trip back to Europe will be what he needs to get his game going.

TYRRELL HATTON ($7,800): Hatton has a history of playing well in DP World Tour events, but his recent form should keep his ownership down. I like Hatton this week because he has enough experience to know how to bounce out of a slump and he is a “horse for the course.” Hatton has made 6 of his 7 cuts at the Scottish Open and his worst finish since it moved to the Renaissance Course is 18th. He should have a lot of confidence this week.

ADRIAN MERONK ($7,700): I have read a lot of the “experts” saying the most similar courses to the Renaissance Course it he Irish Open. If that is so, why not play the golfer who won the Irish Open last week? Meronk’s win last week wasn’t the first time he has played well this year. He has finished 3 of his last 4 tournaments in the top-6. I expect Meronk to keep the hot streak going in Scotland.

MATT KUCHAR ($7,400): I will take a chance with Kuchar this week. He is one of the more underrated golfers on the links courses and his form is not too bad (Kuchar has made 7 straight cuts on tour). He has played the Scottish Open four times. He finished 2nd, 4th, MC and 20th. Not too bad. I doubt Kuchar will be highly owned this week.

JORDAN L. SMITH ($7,300): The golfer that popped when I ran the key stats for this tournament is Smith. He ranks 8th in the key stats this week when you add in the DP World Tour tournaments. Smith Ranks No. 1 in Shots Gained Approach, No. 1 in Scramling and 12th in Shots Gained Tee-to-Green. Those are the types of stats we are looking for this week. Smith finished 24th last week in the Irish Open and he will have the upside to finish in the top-20 again this week. 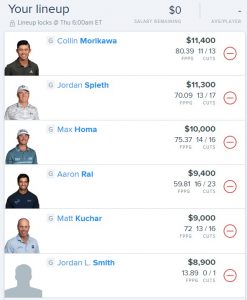 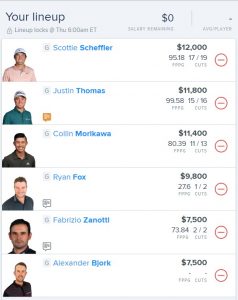 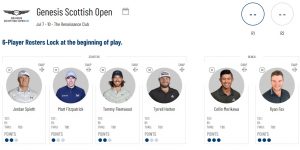 * The PGA TOUR Fantasy game will use the Scottish Open this week (I was expecting the Barbasol Championship to be used for this game). This is the fifth tournament of segment four. This is also the toughest segment to navigate. We have the U.S. Open; Open Championship and the four playoff tournaments in this segment. It is going to be tough getting to the end with the top golfers. Many of the European Golfers tend to play well in this tournament, so it may not be a bad idea to take a chance with some of the golfers familiar with links style golf.