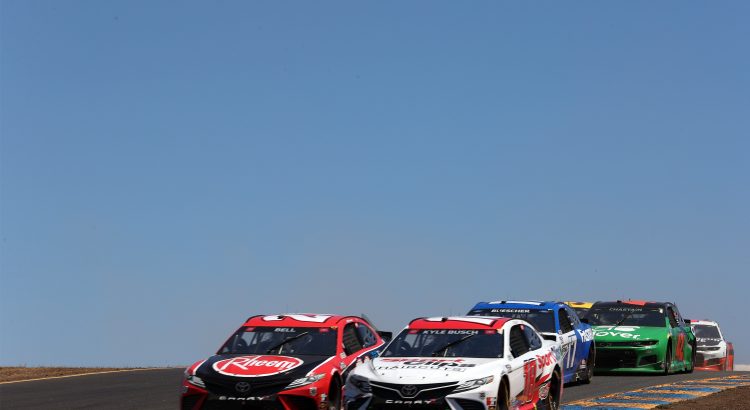 The NASCAR Cup Series will celebrate the 4th of July weekend at Road America. This will be the third of the six road course races on the schedule. The Cup Series will compete at road courses in three of the last nine races before the playoffs start. The days of penciling in Chase Elliott and the Joe Gibbs Racing drivers into the top-five every time the Cup Series competes at a road course may be over. The Gen-7 car has required a new driving style and evened out the playing field. The independent rear suspension and the larger brake package allow the drivers to be more aggressive on the road courses. Trackhouse Racing has dominated the road courses this year. Can they keep it up? It will be fun to watch. The Kwik Trip 250 can be seen Sunday at 3 p.m. ET on USA Network (also streaming on Peacock).

The Cup Series had their regular practice schedule this week. The teams were broken down into two groups and they had 20 minutes to dial in their cars for the race. That is not enough time for any of the drivers to make many long runs on a 4-mile track. The cars were impounded after qualifying so the practice speed should give us an idea of the speed the teams will start the race with Sunday. 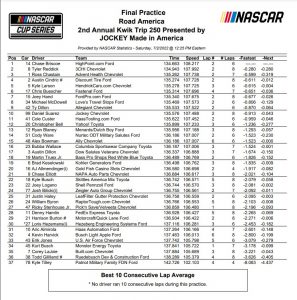 Typically we look at the data from the road courses over the last two or three seasons when we select the drivers for our DFS lineups. The Gen-7 car does not perform like the old cars at these tracks. It takes a different driving style because of the independent rear suspension and the larger brake package. For that reason, we need to put a stronger emphasis on the drivers who have scored well on the road courses this year in the Gen-7 car.

Here are the average DraftKings and FanDuel Points in the two races on road courses this year (COTA and Sonoma)…. 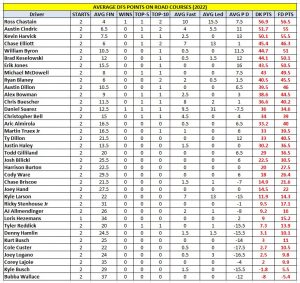 Everyone knows Chase Elliott is the best pick on road courses. The popular lineup construction this week will be to build a “stars and scrubs” lineup with Elliott, one or two other high-priced drivers and three cheap drivers. A lineup like Chase Elliott ($11,100), Ross Chastain ($10,300), Martin Truex Jr. ($9,600), Michael McDowell ($6,800), Chris Buescher ($6,300) and Justin Haley ($5,900) should have a good chance to score well but it will be popular. 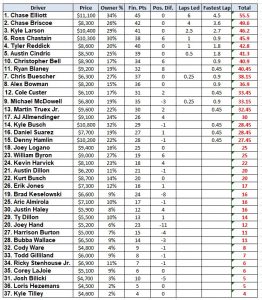 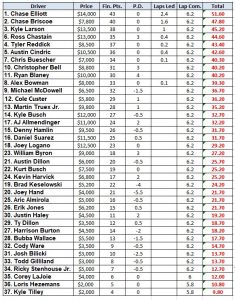 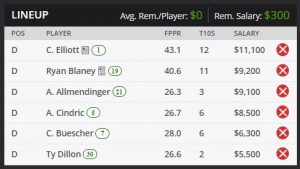 CHASE ELLIOTT ($11,100):  I was shocked when I saw Elliott was not the highest-priced driver. We need safe picks for our Cash Contest lineups and it is hard to find a safer driver than Elliott. He has finished eight of his last 10 road course races in the top-eight, with a 5.6 average finishing position. Elliott should lead a lot of laps and score well from the pole position Sunday.

RYAN BLANEY ($9,200): I have Blaney in both the Cash and Tournament Contest lineups. He fits the mold of “safe drivers” for the Cash Contests. Blaney finished sixth in both road courses races this year. He should have a good chance to move up 8-10 spots and score 40 – 45 DK Points for your team.

AJ ALLMENDINGER ($9,100): Allmendinger hated his car in practice. That is nothing new. He knows what he needs to win the race at the road course races and he is always unhappy if he doesn’t get it. Allmendinger starts 21st so I do not need him to win the race. I just need Allmendinger to finish in the top-10 to score 40+ DK Points. He has the talent to do that. I just hope he has the car.

AUSTIN CINDRIC ($8,500): Cindric has been one of the best drivers on the road courses this season. He finished fifth at Sonoma and eighth at Sonoma. Cindric was fast in practice and qualified fifth for the race. He should spend most of the race running in the top-10 with a great chance to finish in the top-10.

CHRIS BUESCHER ($6,300): RFK Racing owner, Brad Keselowski said on Sirius XM NASCAR Radio before practice, “We found a setup that worked in practice at Sonoma. It allowed Chris Buescher to finish second in that race. We brought the same setup to the track this week. I am hoping it works again.” It did. Buescher posted the sixth fastest speed in practice and qualified seventh for the race. I need six drivers who can finish in the top-12 and Buescher can do it.

TY DILLON ($5,500): I will take a chance with Dillon from the 30th starting position. He was able to get some extra seat time this week since Dillon competed in the Xfinity Series race. Dillon posted the ninth fastest speed ninth fastest speed in practice. If he can find his practice speed for the race Sunday, Dillon should score well I DFS contests. 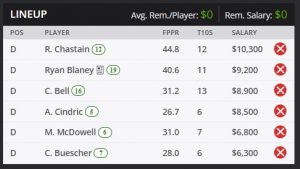 ROSS CHASTAIN ($10,300): Chastain has been the best driver on the road course this year. He won at COTA and the No. 1 car finished seventh at Sonoma. Chastain also finished seventh at Road America last year. He had brake problems in practice but they got the issue fixed. Chastain was third-fastest in practice. The No. 1 car has consistently finished in the top-10 this year. Chastain should finish in the top-10 Sunday with the upside to win the race.

RYAN BLANEY ($9,200): The popular pick from this price range will be AJ Allmendinger. I will pivot to Blaney. He is one of only four drivers to finish both road course races in the top-10. I doubt Blaney will be heavily owned Sunday and I like the upside he provides the lineup. I will take a chance with the No. 12 car.

CHRISTOPHER BELL ($8,900): Bell could get overlooked this week and that could be a mistake. AJ Allmendinger will take a lot of his ownership because of his history on the road courses. William Byron will take a lot of Bell’s ownership because of his starting position. So that leaves me with a lower-owned Bell who finished third at COTA and second at Road America last year. I will take it.

AUSTIN CINDRIC ($8,500): Chase Briscoe should get a lot of ownership because he was the fastest driver in practice. I will pivot to Cindric. The No. 2 car posted the fourth fastest speed in practice and qualified fifth for the race. Cindric won the Xfinity Series race at Road America in 2020. I would not be surprised if he added a Cup Series trophy to his collection Sunday.

MICHAEL MCDOWELL ($6,800): Some people may think McDowell “outkicked his coverage” since he qualified sixth. He proved at Sonoma when he started fourth and finished third that he can run up front. McDowell posted the eighth-fastest speed in practice. I just need McDowell to finish in the top-10. I think he can do it.

CHRIS BUESCHER ($6,300): I will have Buescher in the Cash and Tournament Contest lineups this week. His speed is too fast and his salary is too cheap to fade. Buescher proved he can run up front at Sonoma on the road courses. Brad Keselowski said the team has their road course package dialed in. I will believe him this week. 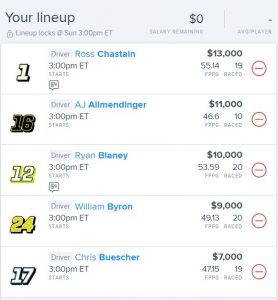 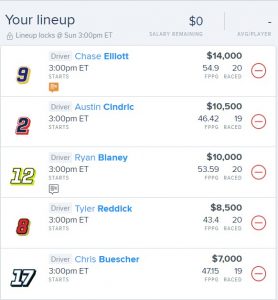