The PGA Tour now has two majors in the books with two more to go. Before the U.S. Open next month, the tour will make the four hour drive south from Tulsa, Oklahoma (Southern Hills C.C.) to Colonial Country Club in Fort Worth, Texas. These two courses are very similar so the golfers who played well last week should be in good form for the Charles Schwab Challenge.

Usually the field for the tournament following a major is weak. Some of the top golfers who will be teeing it up this week include: Scottie Scheffler, Justin Thomas, Jordan Spieth, Collin Morikowa, Victor Hovland, Will Zalatoris, Daniel Berger and Tony Finau. There should be plenty of good players to choose from for our DFS lineups in Texas.

Accuracy off the tee is more important than distance at Colonial Country Club. We need to focus out picks on golfers who can hit it straight this week because the trees that line the fairways will cause the golfers a lot of trouble if they cannot find the fairways. Just like last week at Southern Hills C.C., Colonia Country Club is a second shot course. 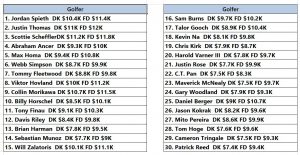 There will be 121 golfers in the field this week and the top-65 and ties will make the cut. That means more than half of the field will play all four rounds this week. It should be easier to get 6/6 golfers through the cut this weekend.

I really like some of the higher-priced golfers this week, but we need to stick to a balanced lineup for Cash Contests. There are not a lot of reliable golfers in the low-$7K and $6K price range to trust for Cash Contests.

I will be using two strategies for my Tournament Contests this week. I really like Jordan Spieth at his favorite course so I will try to have double the ownership than the field this week (about 40%). Scottie Scheffler and Justin Thomas will likely have lower ownership than they should so I will have a few shares of these top golfers. The majority of my lineups will be “balanced lineups.” There is tremendous value in the $8K and high $7K price range this week. I want as many shares of these golfers as possible. 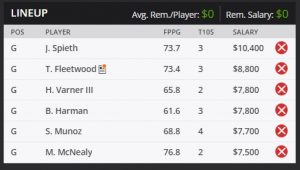 JORDAN SPIETH ($10,400): Spieth is the safest play in the field this week and he is my pick to win. He has played this tournament at his home course every year since 2013. Spieth finished 2nd, 10th, 8th, 32nd, 2nd, 1st, 2nd, 14th and 7th. That is ridiculous consistency in the Charles Schwab Challenge. Spieth will be highly owned for Tournament Contests, but he is a lock for my Cash games this week.

TOMMY FLEETWOOD ($8,800): I debated between Webb Simpson and Fleetwood for the second spot in my Cash Contest lineup. I really like what I saw from Simpson last week, but Fleetwood is the safer play. He has made every cut since February and that includes a fifth-place finish last week at the PGA Championship. He should have no problem finishing in the top-15 at the Charles Schwab Challenge.

HAROLD VARNER III ($7,800): The third spot in my Cash Contest lineup came down to Chris Kirk or HV3. Kirk is a previous winner of the Charles Schwab Challenge and his course history is fantastic. HV3 also has good course history and his form is better than Krik, so HV3 is the safer play. He hasn’t missed a cut since February and has a few top-10 finishes. HV3 should finish in the top-20 this week.

BRIAN HARMAN ($7,800):  Harman got off to a slow start in the PGA Championship last week, but he was one of the best golfers in the field over the weekend. I am hoping that momentum carries over to one of his favorite courses. Harman has made eight consecutive cuts at Colonial Country Club and he has made five of his last six cuts on tour. Harman should extend his cut streak this week at the Charles Schwab Challenge.

SEBATIAN MUNOZ ($7,700): I have been playing Munoz a lot over the last month and so far he has not let me down. Munoz has made every cut since mid-January so his form is fantastic. He finished third last year in the Charles Schwab Challenge so he has good course history too. Munoz ranks 15th in the key stats so there is a lot to like about Munoz for $7,700.

MAVERICK MCNEALY ($7,500): Like most Gen-X people, I cannot wait for Top Gun Maverick to come out this week. You did not think I was going to fade Maverick this week, did you? Maverick is the “Top Gun” when it comes to making cuts on tour. McNealy has made 14 cuts in a row on tour and has never missed a cut in the Charles Schwab Challenge (3 for 3). His last missed cut was last October. We need safe golfers for our Cash Contest lineup and this golfer will not have any bogies on his tail this week (OK, sorry… I had to include a stupid Top Gun line at the end). 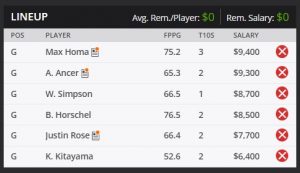 MAX HOMA ($9,400): I will be playing some “stars and scrubs” lineups with Scottie Scheffler, Justin Thomas and Jordan Spieth, but I will post a good balanced lineup for this article. Homa will be at the top of the lineup this week. His recent form is outstanding. Homa won the Wells Fargo three weeks ago and he finished 13th last week in the PGA Championship. He also ranks No. 3 in Shots Gained Tee-to-Green, No. 2 in Shots Gained Approach, No. 1 in Ball-Striking and No. 3 overall in the key stats. Homa should have a good chance to win this week.

ABRAHAM ANCER ($9,300): Ancer has good course history and his recent form is good. Ancer finished 14th at the Charles Schwab Challenge in 2021 and 2020. He has never missed a cut in this tournament so he should be a safe pick. Ancer also has some upside since he is coming off a ninth-place finish in the PGA Championship. I like what I saw last week with Ancer so I will play him at Colonial Country Club.

WEBB SIMPSON ($8,700): Is Webb finally back? He sure looked good last week in the PGA Championship. Simpson made a late charge on the weekend to finish 20th. He should be really good this week if his health problems are finally behind him. Colonial Country Club sets up well for his game. He finished third in this tournament in 2016 and fifth in 2017. Simpson has a lot of upside this week and that makes him a good pick for Tournament Contests.

BILLY HORSCHEL ($8,500): There is a lot ot like about Horschel this week. He has played the Charles Schwab Challenge in four of the last five seasons and he has never missed a cut at Colonial Country Club. He has also made 10 of his last 11 cuts on tour (His only missed cut was because he had to golf is horrible weather at THE PLAYERS). Do you like stats? Horschel ranks eighth in the key stats this week. I doubt Horschel will be highly owned and he has a lot of upside in this tournament.

JUSTIN ROSE ($7,700): I asked if Webb Simpson is back. How about Rose? Is he back too? We are getting a tremendous discount on one of the former No. 1 golfers in the world if his form is returning. Rose looked good last week with his 13th place finish in the PGA Championship. Now he gets to play in a tournament where he finished 20th, 3rd, 58th and 1st over the last four years. There is a lot of risk and a lot of upside with Rose this week so he is a good play for Tournament Contests.

KURT KITAYAMA ($6,400): The golfer that stood out when I ran the key stats for this tournament was Kitayama. He ranks No. 15 in Shots Gained Tee-to-Green, No. 5 in Shots Gained Approach, No. 8 in Ball-Striking and No. 11 overall in the key stats. Kitayama missed the cut his last time out (AT&T Byron Nelson) but he finished second (Mexico Open) and 15th (Wells Fargo) is his previous two tournament. There is a lot of upside with Kitayama for $6,400 this week. (He is $9,100 on FD so that shows Kitayama is likely mispriced in DK). 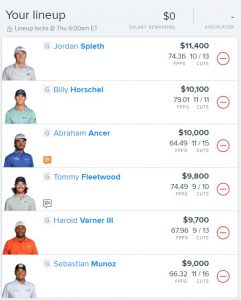 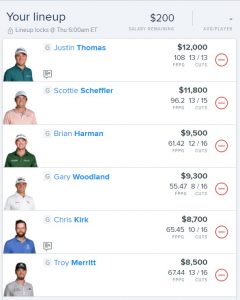 * This is the 10th of 11 tournaments in Segment 3. There is no reason to save allocations this week. The field for next week’s Memorial Tournament has not been released yet, so we do not know which golfers in the field will be playing at “Jack’s Place.” I am just playing the best golfers I can this week and not worrying about allocations.

* Sometimes you have to admit when you are wrong and last week I made a mistake by using Jordan Spieth in my One & Done contests. When Hideki Matsuyama reported neck issues, I panic and used the next best golfer (Spieth). I should have save Spieth for this week. If you have Jordan available, use his in the Charles Schwab Challenge. It is his best tournament.