The PGA Tour will travel back to Canada this week for the first time since 2019. The players were not allowed to compete in Canada the past two seasons because of Covid restrictions. Now the tour will tee it up at St. George’s Country Club in Toronto, Canada. This will be the final tune-up for the golfers before the U.S. Open next week.

The field is top-heavy for the event in Canada. Some of the golfers in the field include: Scottie Scheffler, Justin Thomas, Rory McIlroy, Cameron Smith, Shane Lowery, Tony Finau, Matthew Fitzpatrick, Tyrrell Hatton and Canadians Corey Conners, Adam Hadwin and Mackenzie Hughes. Absent is Dustin Johnson. DJ “was” the top golfer represented by the RBC but they dropped their sponsorship with DJ last week when he decided to skip this event (he was obligated to show up per his contract with the RBC) to play in the LIV event (Saudi Tour). DJ Announced that he is no longer a member of the PGA Tour.

* DraftKings is the official DFS provider for the PGA Tour so I doubt we will get any contests for the LIV Tour.

Accuracy will be the name of the game in Canada. The fairways are lined with trees and the greens are very small and difficult to hit. There are also a lot of elevation changes. The course is short, but the par-3’s are long. Three of the par-3’s play over 200-yards and the other is 188-yards. You will want golfers with a strong iron game in your lineups this week.

Accuracy off the Tee 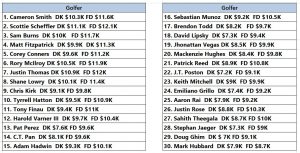 The Canadian Open has some big name golfers in the field, but it also has a lot of bad golfers teeing it up Thursday. Below the mid-$8K price range does not look good this week. You almost have to play a “stars and scrubs” lineup in both Cash and Tournament contests. Since I hate playing “stars and scrubs” lineup in Cash Contests, I will not be playing any of them this week. I will take some of the bankroll I usually use for my Cash Contest lineups and use it for a few Head-to-Head contests this week. The Cash Contest lineup posted below is one of the lineups I will be using for the head-to-head contests this week.

I plan to own 25% – 30% on Scottie Scheffler, Cameron Smith, Sam Burns, Matthew Fitzpatrick and Corey Conners and then pair them with the lower priced golfers who I will only have in 10% – 15% of my lineups. 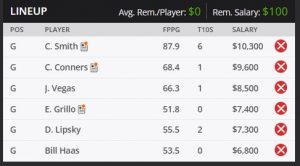 * Half of my Cash Contest lineup has withdrawn. There may be more WD’s as we get closer to tee time Thursday, so keep your eye on Twitter for updates. My new Cash Contest lineup is posted above. I do not like it as much as the one I had posted before, but it should cash this week. 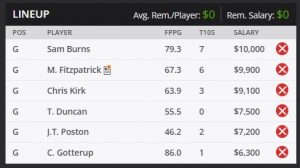 SAM BURNS ($10,000): Burns will likely be the golfer priced over $10K who gets overlooked this week and that could be a mistake. Burns just won his last time out at the Charles Schwab. That course is similar to what we will see this week with tight fairways and ball-striking being the key to winning. Burns ranks 5th in the key stats this week. I will use him as a pivot from the more popular golfers this week.

MATTHEW FITZPATRICK ($9,900): Fitzpatrick burned a lot of people (including me) with his missed cut last week. I am hoping that scares people away from playing Fitzpatrick this week. Fitzpatrick ranks No. 1 in the key stats this week. I expect a bounce-back performance from Fitzpatrick in Canada.

CHRIS KIRK ($9,100): I would not be surprised if Kirk won this week. His recent form is good with three consecutive made cuts, including a 5th-place finish at the PGA Championship. He also ranks 6th in the key stats. Kirk has the ball-striking skills to keep the ball in the fairway and score well in Canada. I doubt he will be highly owned this week.

TYLER DUNCAN ($7,500): Duncan has been one of my go-to-golfers in the $7K price range this year. I will go back to Duncan this week. He finished 15th his last time out at the Charles Schwab. That course is similar to St. George Country Club. Duncan also ranks 25th in Shots Gained Tee-to-Green and 21st in Shots Gained Approach. Duncan should finish in the top-30 this week with top-20 upside.

J.T. POSTON ($7,200): Poston was one of the names that popped when I did my research for this tournament. He finished 37th last week at the Memorial Tournament and has made 4 of his last 6 cuts on tour. Poston ranks 24th in Shots Gained Tee-to-Green, 31st in Shots Gained Approach, 14th in Shots Gained Putting (Bentgrass) and 12th overall in the key stats. I will trust the numbers and play Poston this week.

CHRIS GOTTERUP ($6,300): We have to use a “punt play” in order to fit many of the top golfers into our lineups. Why not punt from deep inside our endzone this week and take a chance with a future PGA Tour star like Gotterup. He won the Haskins Award in college golf this year. That is equivalent to the Hiesman Trophy in college football. He has only played one PGA Tour event, but it was a good one. Gotterup finished 7th this year at the Puerto Rico Open. I will take a chance with the best college golfer and see if he can repeat his success he had in his first PGA Tour tournament. 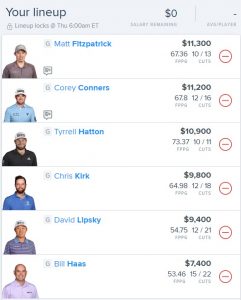 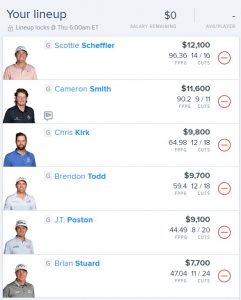 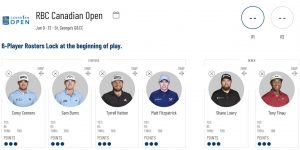 * This is the first tournament of segment four. This is also the toughest segment to navigate. We need to decide if we want to use Scottie Scheffler Rory McIlroy and Justin Thomas against a weaker field or save them for the U.S. Open, Open Championship and the four playoff tournaments. I am going to try and save them for the majors and the playoffs.