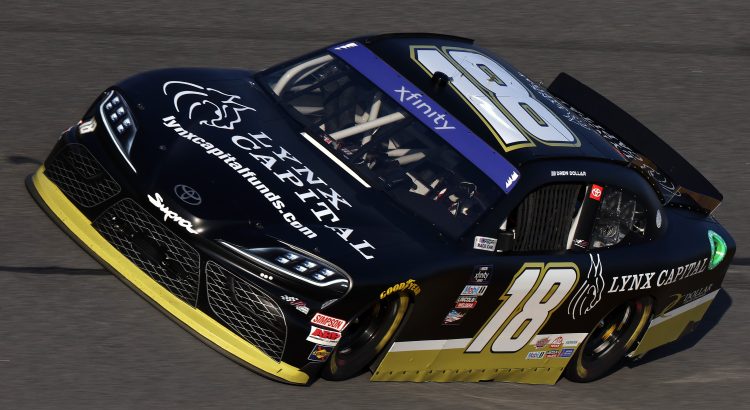 The DFS picks for the Xfinity Series have been red hot this year. We hit on the Junior Motorsports Stack at Las Vegas when three of their cars finished in the top-five and Sam Mayer led 25 laps. I played the picks in the Daily Dolor Contest (coast $1 to enter) last week and the picks finished third and returned a $114 profit on the $1 investment. Not too bad (at least it pair for an annual subscription if you did the same). Hopefully the luck continues in the Nalley Cars 250 today.

Practice for the Xfinity Series was rained out Friday. NASCAR felt it was more important for the teams to get some time to practice than it was to have single-car qualifying. They replaced the qualifying session today with a 40-minute practice and the field was set “per the rule book.”

The Xfinity Series practiced the cars at Atlanta Motor Speedway Saturday. The teams were given some extra practice time this week since Atlanta is a completely different track from what the teams are used to. The track was repaved and reconfigured. The track now has progressive banking and this will add a lot of speed to the cars. The cars will use the draft a lot more than they ever have on a 1.5-mile track so this will likely be a wild race today. 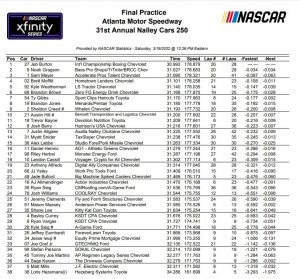 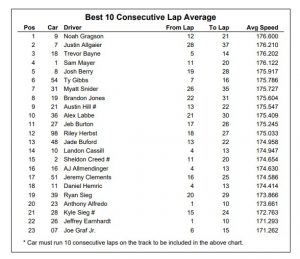 Usually I post the trends for the dominators in this section but we do not have any data to use to predict how many laps the main dominator will lead this week. The race is scheduled for 163 laps (251 miles). That means there are 40.75 points available for leading laps and 73.35 points available for fastest laps (114.1 dominator points available). I expect there will be more lead changes and the dominator points will be spread out more than we typically see on 1.5-mile tracks today. The fastest laps will get spread out through the field since the draft will be in play. The drivers who run towards the back receive a tow from the draft and that typically allows the drivers running in the back to score some fastest laps.

I am not going to treat this race exactly like a Superspeedway where we pick the drivers who start in the back with the best chance to score place differential points. I will select some drivers who start up front this week but I am not chasing the dominator points. My strategy this week is to simply pick the drivers I think can finish in the top-10 and some a couple of drivers who can score a lot of place differential points. If I run into some dominator points on the way, that will be great.

Noah Gragson $10,700 is clearly the class of the field this year. He finished third (Daytona), second (Auto Club), second (Las Vegas) and won last week at Phoenix. The No. 9 car has also led 203 laps this year. There is no reason to believe Gragson will not dominate again this evening since he starts on the pole and has the No. 1 pit stall.

Justin Allgaier $10,500 may have a great chance to win the Xfinity Series Championship if his teammate (Noah Gragson) was not in the series. The Junior Motorsports cars are the fastest on the track in 2022 and you cannot go wrong with any of them in your lineup. Allgaier has finished every race in the top-10 and he led laps in every race on the “West Coast Swing.” Allgaier is also the only Xfinity Series driver who tested at Atlanta. The No. 7 car starts sixth tonight, so Allgaier will have a good chance to score dominator points.

AJ Allmendinger $10,300, Daniel Hemric $9,700 and Landon Cassill $9,300: I wasn’t planning on playing many of the Kaulig Racing cars because they have been a bit behind on speed from the Junior Motorsports, Joe Gibbs Racing and Richard Childress Racing cars, but Atlanta looks a lot like Daytona. Kaulig Racing is the best on the Superspeedways so I do not mind stacking two of their cars in a lineup.

Ty Gibbs $10,100 has not looked as fast this year as he did in 2021. There are a couple of reasons why. The Joe Gibbs Racing cars were the fastest on the track last year and they had the best pit crews. They still have fast cars but Joe Gibbs Racing is not using the Cup Series pit crews this year. That has caused Gibbs to lose spots on pit road that he has not been able to gain back. He still won at Las Vegas and has a 7.8 average finishing position. Gibbs will have a good chance to score some dominator points from the fourth starting position.

Trevor Bayne $9,900 will be back in the No. 18 car for Joe Gibbs Racing. He was not scheduled to run this race but Joe Gibbs Racing has been so impressed with the performance of Bayne that they decided to add some more races to his schedule. Bayne finished third and fourth in his two races in the No. 18 car and he is averaging 31 laps led per race. Bayne is my second dominator behind Noah Gragson since he starts from the fifth position this evening.

Josh Berry $9,500 went from being a “sleeper pick” to being a “short-track specialist” and now he can be considered one of the best drivers in the Xfinity Series. It does not matter what type of track it is. Berry finished third, fourth and fourth on the “West Coast Swing.” The No. 8 car should have a good chance to finish in the top-five this evening but there is some risk since he starts on the front row.

Riley Herbst $8,300 crashed at Phoenix so now he will start 24th at Atlanta. Herbst finished 4th at Daytona, 9th at Auto Club and 14th at Las Vegas so there is a lot of upside with the No. 98 car tonight. Herbst will be locked into my Cash Contest lineup for this race.

Sheldon Creed $8,900 has been fast this year. The No. 2 car finished sixth at Daytona and seventh at Las Vegas. Atlanta is a 1.5-mile track that should race like Daytona. Well, Creed’s two best races were on a 1.5-mile track and at Daytona. I will take a chance with Creed tonight from the 13th starting position.

Sam Mayer $8,700 has not been able to finish up front like his Junior Motorsports teammates have this year, but the No. 1 car still has a lot of speed. Mayer spent a lot of time running in the top-10 this year only to find problems at the end of the race. Sooner or later his luck is going to change and Mayer will finish in the top-five. He is a cheaper version of Brandon Jones. Mayer is a good pick for Cash and Tournament Contest this evening.

Anthony Alfredo $8,100 started out the season on fire with a 7th place finish at Daytona and a 5th place finish at Auto Club. He had a decent race at Las Vegas (Alfredo started 25th and finished 17th) but had an engine problem last week at Phoenix. “Fast Pasta” should be a good pick if his team can avoid mechanical problems. I like Alfredo for Cash and Tournament Contests tonight.

Sage Karam $7,100 will be behind the wheel of the No. 44 car for Alpha Prime Racing. This is the car that Kaz Grala has been driving. Grala finished 23rd at Las Vegas and 25th at Phoenix. Now Karam will start 29th. He should have a good a good chance to move up 5-10 spots tonight.

Brett Moffitt $7,800 has been a decent pick in DFS this year. He finished eighth at Las Vegas and he started 18th and finished 15th last week at Phoenix. Moffitt does not have as much upside as he does when he qualifies around the 20th position but he should still be a good pick from the 16th starting spot. I like Moffitt for Tournament Contests this evening.

J.J. Yeley $7,000 is in my list of Core Drivers again. He is one of the most reliable drivers in the Xfinity Series because he is not going to overdrive the car and Yeley is good at avoiding wrecks (unlike the younger drivers). Yeley probably will not finish in the top-10, but he should score some place differential points and be a reliable driver for your DFS lineup. I like Yeley for Tournament Contests this evening.

Tommy Joe Martins $6,500 will be back behind the wheel of the No. 45 car for Alpha Prime Racing. Martins only competed in two races this year so he will start 37th tonight. There is nowhere to go but forward for Martins. I like him for Cash and Tournament Contests this evening.

Bayley Currey $5,300 will be driving the No. 4 car for JD Motorsports. This is not one of the fastest cars in the field but Currey should be able to keep it out of trouble. He finished 18th at Las Vegas and 20th at Phoenix. Currey starts 20th and should be able to finish around the 20th position. I like Currey as a cheap play for Tournament Contests. 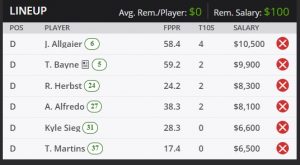 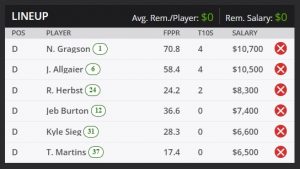 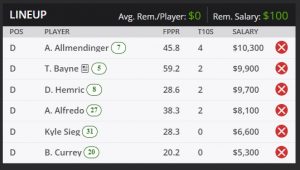