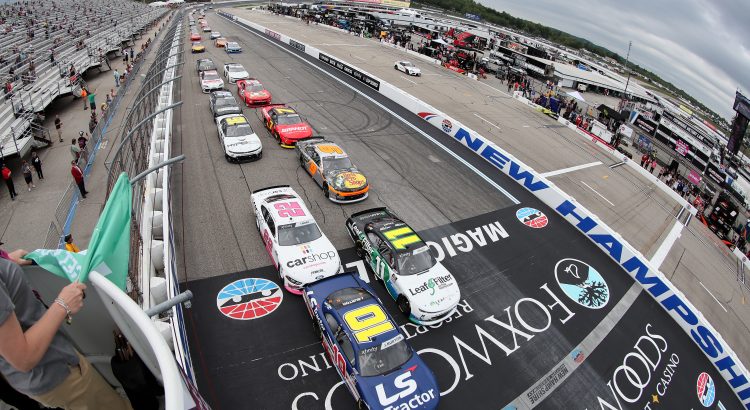 The Xfinity Series will join the Cup Series at New Hampshire Motor Speedway this weekend. The racing in the Xfinity Series has been pretty competitive this year and I expect the same at the Magic Mile. “The Series Where Names Are Made” has become a battle between Joe Gibbs Racing and Junior Motorsports.” These two teams should dominate the top-10 again this week, especially with William Byron in a Junior Motorsports car and Trevor Bayne driving for Joe Gibbs Racing. It should be a fun race to watch. The Crayon 200 can be seen Saturday at 2:30 p.m. ET on USA Network.

The Xfinity Series had their regular practice schedule this week. The teams were broken down into two groups and they had 20 minutes to dial in their cars for the race. New Hampshire is a one-mile, flat oval track. Most of the teams were able to make a long run in practice. The cars qualified for the race immediately after the practice session. The cars were then impounded for the race Saturday. That means the teams did not have time to work on the cars after practice. The cars that were fast in practice should be fast at the start of the race this week. 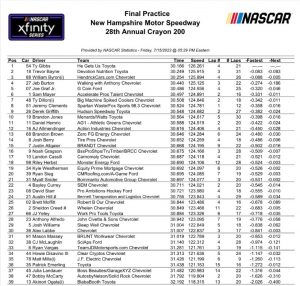 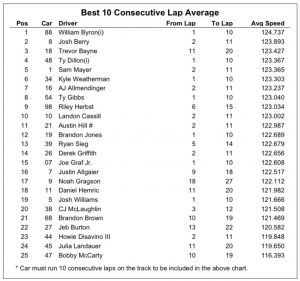 The Xfinity Series has competed in three flat track races this year that correlate into speed at New Hampshire. Those tracks include the races at Phoenix, Martinsville and Richmond. We can learn a lot by looking at which drivers ran well in all three races.

Here are the average DraftKings Points in the three races on flat, intermediate track races this year…. 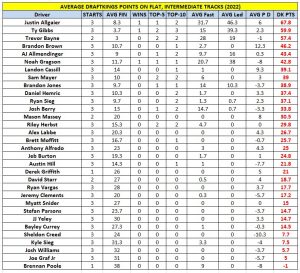 The race at New Hampshire is scheduled for 200 laps (211 miles). That means there are 50 points available for laps led and 90 points available for fastest laps (140 dominator points). The trend in the Xfinity Series is for one driver to lead roughly 90 laps, another drivers leads roughly 60 laps and a third driver leads 40 laps. The race Saturday should be have three dominators. We will need at least two of these drivers in our lineup Saturday so I will be paying up for the drivers who I think can lead the most laps at New Hampshire.

I really think this is going to be a race between Joe Gibbs Racing and Junior Motorsports. I will try to fit as many drivers from these two teams as possible into my lineups Saturday. These drivers include: Ty Gibbs, Trevor Bayne, Brandon Jones, William Byron, Noah Gragson, Justin Allgaier, Josh Berry and Sam Mayer. 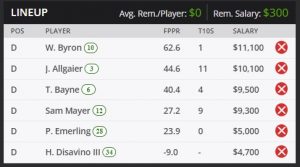 WILLIAM BYRON ($11,100): Byron is a lock for the Cash Contest lineups. He has the most talent in the field, the third-fastest car in practice and he starts 10th in the race. Byron should score a lot of place differential points, lead at least 40 laps and have a good chance to win the race Saturday.

JUSTIN ALLGAIER ($10,100): Allgaier has taken over as the top driver for Junior Motorsports. He has finished seven of his last eight races in the top-seven and that includes wins at Darlington and Nashville. Allgaier finished second and third in his last two races at the Magic Mile. He should finish in the top-three again this week.

TREVOR BAYNE ($9,500): Bayne will be driving the car that Christopher Bell had in this race last year. Bell won both Stages, led 151 of the 200 laps and won the race. Bayne will be a great pick if he can have half of that production. Bayne started fourth and won the race at Phoenix (another flat track). He should have a good chance to win at New Hampshire.

SAM MAYER ($9,300): Mayer is a good pick for $9,300. He has been really good this year in the No. 1 car for Junior Motorsports. He finished third at Richmond and fifth at Martinsville. Mayer posted the sixth-fastest speed in practice. He should score some place differential points from the 12th starting position.

PATRICK EMERLING ($5,000): This New York native is no stranger to racing at New Hampshire. He has plenty of experience in his modified car at the track. Emeriling starts 28th so his ceiling is not too high, but his floor is not too low either. I just need Emeriling to move up three spots in the race to score me 20 DK Points. He should be able to do it this week.

HOWIE DISAVINO III ($4,700): Disavino III will be my punt play in my Cash Contest lineups. He has started three races in the Xfinity Series with a 31st place average finishing position. That is not great, but it would be 14 DK Points from his 34th starting position. That should be enough if my top drivers perform as well as I think they will Saturday. 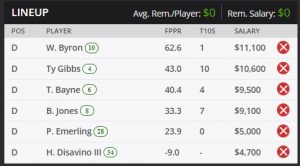 WILLIAM BYRON ($11,100): I am going to play Byron as part of my Joe Gibbs Racing stack this week. Byron should be the top driver in this field since he has the upside to score 10 place differential points and be one of the three dominators in the race. I know he will be popular, but I will eat the chalk this week.

TY GIBBS ($10,600): I had a hard time picking between William Byron and Gibbs for my race winner Saturday. It should be a battle between those two cars for the win. I went with Byron because of his experience, but Gibbs could easily be in Victory Lane. He had the fastest car in practice.

TREVOR BAYNE ($9,500): Bayne is my favorite pick this week so he will be in my Cash and Tournament Contest lineups. His car has won the last two races at New Hampshire and crew chief Jason Ratcliff guided Christopher Bell to Victory Lane last year in this race. Bayne has too much upside to fade at New Hampshire.

BRANDON JONES ($9,100): I love playing Jones in Tournament Contests. He is the type of driver who wins the race or wrecks trying. Jones has been the best driver on the flat tracks this year. He won at Martinsville and Jones finished second at Phoenix. I like having all three Joe Gibbs Racing cars in my lineup Saturday.

PATRICK EMERLING ($5,000) / HOWIE DISAVINO III ($4,700): I will use the same two “punt plays” in my Cash and Tournament Contests. I usually like to diversify my picks but these two drivers fit the salary cap and they have the best chance to score well from the salary I had left to spend.