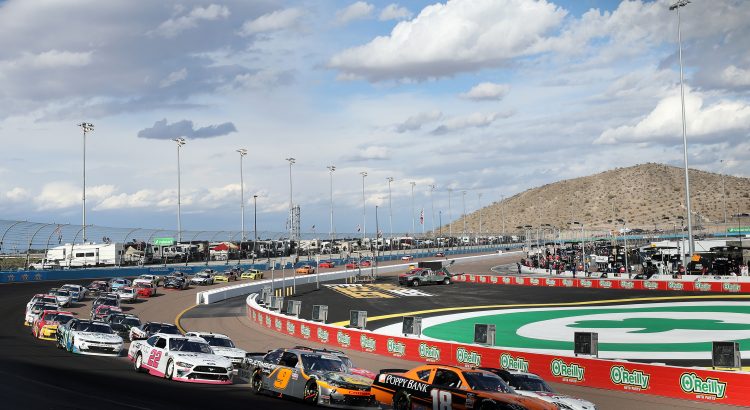 We do not get a lot of data from practice since the teams only have 15 minutes to dial in their cars. There were some drivers who made long runs so this should help us figure out which drivers will be fast today. The practice speeds in the Xfinity Series have not transferred into race speed as much as it has in the Cup Series (The Cup cars have had more time to practice), but we cannot ignore the speeds completely. 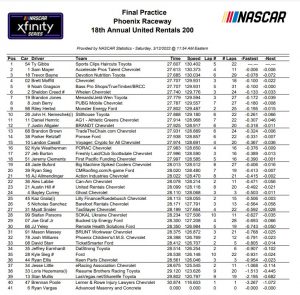 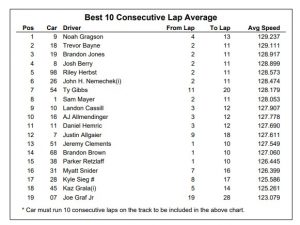 The race today is scheduled for 200 laps (200 miles). That means there are 50 points available for leading laps and 90 points available for fastest laps (150 dominator points). The trend in the Xfinity Series is for one driver to lead 110 laps and two other drivers lead roughly 35 laps each. That means there should be one main dominator and two sub-dominators in the race Saturday. It will be important that we pay up for the drivers we think can lead the most laps at Phoenix.

The drivers with the best chance to dominate the race today include: Noah Gragson, Trevor Byane, Ty Gibbs, Brandon Jones and Josh Berry

Justin Allgaier $11,500 is one of the best short track drivers in the Xfinity Series. He has two wins at Phoenix (2019 and 2017) and it would not surprise me if the No. 7 car was in Victory Lane today. Allgaier was the top dominator last week at Las Vegas. He could easily be the top dominator at Phoenix.

Noah Gragson $11,200 has been the best driver in the Xfinity Series this year. He finished second at Auto Club and second at Las Vegas. He also averaged 38.5 laps led in those races. Phoenix has not been his best track but Gragson is a more mature driver now. The No. 9 car will have a good chance to dominate the race today.

Ty Gibbs $10,900 has the best car in the field each week. This has allowed the young driver to have a lot of success. Gibbs started 27th and finished second at Phoenix last year. He was the second-highest scoring driver in DraftKings contests in that race. Joe Gibbs Racing will give Gibbs a car fast enough to be one of the top scoring driver in your contest today.

Josh Berry $10,200 crashed out of the race at Phoenix last year. It was one of his first races in the Xfinity Series though and he has a lot more experience now. Berry finished fourth in his last two races (Auto Club and Las Vegas) so he has a lot of upside today. Berry posted the eighth-fastest speed in practice and he qualified eighth. He has top-five upside today.

Daniel Hemric $10,000 will have a lot of good memories as he heads to the track this week. He won his first ever Xfinity Series race and the 2021 Championship at Phoenix last year. The Kaulig Racing cars have been slightly behind Junior Motorsports and Joe Gibbs Racing on speed, but Hemric has the talent to run up front today.

Trevor Bayne $9,700 will be back in the No. 18 car for Joe Gibbs Racing. Bayne drove this car at Auto Club. He started fourth, led 24 laps and finished third. It is tough to fade any of the Joe Gibbs Racing cars today. Bayne was the second-fast driver in practice on the long runs behind Noah Gragson. Bayne will be a good pick to lead some laps and score some fastest laps for your DraftKings contests.

Brandon Jones $9,500 is a high-risk, high-reward driver. That makes Jones a good play for Tournament Contests and a poor play for Cash Contests. Jones won at Phoenix in 2020 and he finished 33rd last year. You just never know what you are going to get with Jones. The upside is so high though that you have to take a chance in a few Tournament Contests. Jones had the third-fastest car on the long runs in practice.

John H. Nemechek $9,200 will be back in the No. 26 car for Sam Hunt Racing. He doesn’t have the Truck Series race for practice this week, but JHN should still be good. He started 10th and finished 12th last week at Las Vegas. Nemechek was 10th-fastest in practice with the sixth-fastest long run speed. Nemechek should have a good chance to finish in the top-12 today.

Sam Mayer $8,700 had one good and one bad race this season in the No. 1 car (not including Daytona). Mayer started 13th and finished sixth at Auto Club and he started ninth and finished 25th at Las Vegas after he wrecked. Mayer still led 25 laps last week and he is getting a lot more out of the No. 1 car than Michael Annett was able to. Mayer finished 12th at Richmond while driving for B.J. Mcloed last year and he finished 13th while driving for Junior Motorsports last November. Mayer was second-fastest in practice. He has a good chance to finish in the top-10 with top-five upside.

Sheldon Creed $8,400 drove the No. 78 car for B.J. Mcloed Motorsports at Phoenix last year. He started 10th and finished 10th. What do you think he will be able to do in his Richard Childress racing Chevy? Creed was sixth-fastest in practice but reported the front tires were chattering. They were working to fix the car. If they can fix it, Creed should be able to finish in the top-10 again and he has top-five upside.

Myatt Snider $8,200 has been horrible at qualifying but he has been decent in the races. Snider qualified outside the top-30 in all of the races this year and he has an average finishing position of 23rd. This week Snider qualified 25th. He should be able to move up 5-10 spot and be a decent play in your DraftKings contests.

Anthony Alfredo $7,600 was not on my radar and I still am not sure he will be a great pick for the race today. The No. 23 car broke a drive shaft early in practice. They missed qualifying because the ream was working to fix it. As a result, Alfredo will start 37TH. The risk is reduced since he starts so deep in the field and he has some upside for place differential points.

Brett Moffitt $7,400 is always a good value pick. He is not going to run up front and dominate the race, but he will qualify outside the top-15 and finish inside the top-10. Moffitt finished eighth and ninth in his two races at Phoenix last year. Moffitt posted the fourth-fastest speed in practice and he qualified 18th. Moffitt has a good chance to finish around the 10th spot today.

Jeremy Clements $6,800 has run inside the top-15 in all three races this season. Last week he started 12th and finished 11th. Clements is always better on the smaller tracks where aero-dynamics do not come into play as much. Clements starts 14th. He finished two of the last three races at Phoenix in the top-10 so he has some upside today.

Kyle Sieg $6,700 has been a good value pick this season. He started 38th and finished 18th at Auto Club. Sieg started 24th and finished 16th last week at Las Vegas. Now he will start 20th at Phoenix. Sieg should have a good chance to move up five spots and be a good pick for your DraftKings Contests.

J.J. Yeley $6,500 has been one of my go to cheap drivers in the Xfinity Series over the last two seasons. He usually finishes around the 20th spot, which is not too bad for his price. The Phoenix native finished 12th and 22nd at his home track last year. He starts 32nd and should finish just inside the top-20 today.

Ryan Ellis $6,300 is one of my favorite sleeper picks for the race today. You need to check out the article by Jeff Gluck for the Atlantic about Ellis if you haven’t read it. It talks about how Ellis spent his entire career as a “start and park” driver. He always wondered how he would do if he could actually race. Well, last week they found some sponsorship and Tommy Joe Martins told Ellis to “got get it.” Ellis started 35th and finished 13th. He starts 35th again and will have a chance to score some place differential points.

Jeffrey Earnhardt $6,100 has been one of the better cheap plays in Xfinity Series DFS contests. He started 20th and finished 15th at Auto Club (36 DK Points) and he started 37th and finished 29th at Las Vegas last week (21 DK Points). I do not mind playing Earnhardt when he starts in the back. He qualified 34th so I will have some shares of the No. 24 car today. 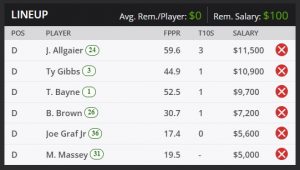 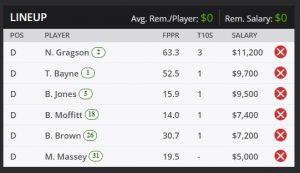