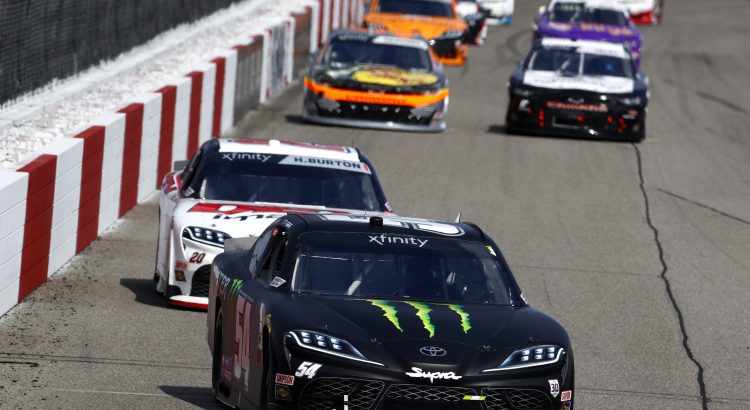 The Xfinity Series had their normal practice session Friday. The teams were allowed to practice for 20 minutes and then the field was broken down into two groups for qualifying. Most of the teams had enough time to make some long runs in practice. This is important because there typically are not a lot of cautions flags at Richmond and the tires wear out quickly. That means there will be a lot of long green flag runs in the race and a lot of cars losing speed throughout these runs. We will want the drivers who had speed on the 10-lap average speed chart in our lineups today. 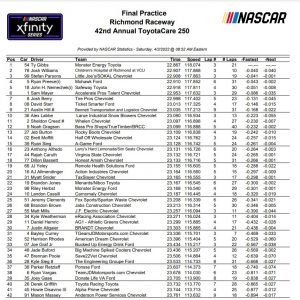 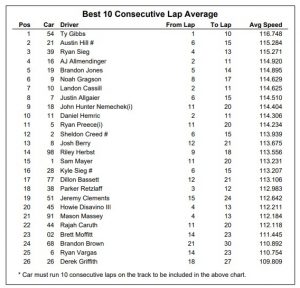 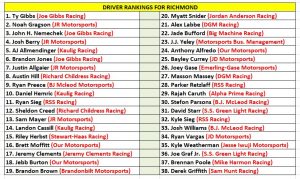 The crew chiefs in the garage will tell you that Richmond Raceway is a short track that races like an intermediate track. The best way to predict the future is to look at the past and the best way to predict which drivers will be fast today is to look at the data from the race at Phoenix (another short, flat track), the race at Las Vegas (an intermediate track) and the races at Richmond last year (to see who has good track history). Here are the DraftKings Points from these three races…. 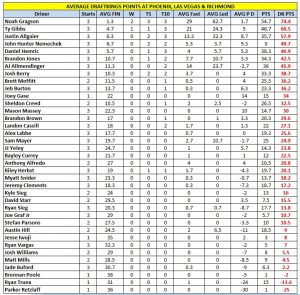 TY GIBBS $11,500: Gibbs already has two wins this year. They both came on 1.5-mile tracks (Las Vegas and Atlanta). Gibbs should be good at the short track today as well. He started 15th, led 67 laps, scored 33 fastest laps and finished seventh last year at Richmond (76.6 DK Points). Gibbs will be in the winning lineup today if he has the same kind of race he had last year.

NOAH GRAGSON $10,900: My strategy this year has been to play the Junior Motorsports and Joe Gibbs Racing cars at the intermediate and short tracks and play the Kaulig Racing cars at the Superspeedways and the road courses. So far the plan is working out perfectly. This should be a two-horse race today between Ty Gibbs and Noah Gragson. I plan to stack these two drivers in many lineups to capture the dominator points (I can find value elsewhere). Gragson led 114 of the 200 laps at Phoenix. He has a good chance to have a similar race today.

JUSTIN ALLGAIER $10,600: Allgaier has a history of being one of the top dominators at Richmond. He led 135 laps in 2020, 86 laps in 2019 and 37 laps in 2018. Allgaier was good at Phoenix this year too. He started 24th, led 10 laps, scored 14 fastest laps and finished 10th (58.8 DK Points). Allgaier was not very fast in practice but he said in an interview during qualifying that he is not worried about it. Allgaier should be a good pick today.

JOHN H. NEMECHEK $10,400: Nemechek will be behind the wheel of the No. 18 car for Joe Gibbs Racing today. This is the same car Trevor Bayne led 38 laps and finished fourth at Phoenix. Nemechek finished fifth at Phoenix but that was in a Sam Hunt Racing car. He should be much faster in Joe Gibbs Racing equipment. I will use Nemechek as one of my dominators today.

AJ ALLMENDINGER $10,200: Allmendinger was my highest owned driver last week but I will not have as many shares of the No. 16 car in my lineups today. The Kaulig Racing cars are fast, but they have not been able to dominate the short or intermediate track races like the Junior Motorsports and Joe Gibbs Racing have be able too. I will still select Allmendinger for a few lineups because he is almost a lock for a top-10 finish.

RYAN PREECE $9,800: Preece will be behind the wheel of the No. 5 car for B.J. Mcleod Motorsports. Nick Sanchez started 28th and finished 26th in this car at Phoenix. Preece should be better than that. Preece posted the fourth-fastest speed in practice and he qualified sixth. I do not think Preece will lead a lot of laps but he does have top-five upside today.

DANIEL HEMRIC $9,600: Hemric has the talent but will he have the car to lead any laps today. Hemric has led laps in every race he has competed in at Richmond in the Xfintiy Series. Hemric posted the 29th-fastest speed in practice but he was 10th-fastest on the long speed chart. Hemric starts 16th and should move up 8-10 spots in the race.

JOSH BERRY $9,100: Berry is good on every type of track but his roots are in short track racing. He won the Xfinity Series race at Martinsville last year. He is under-priced this week on DraftKings. Berry posted the seventh- fastest speed in practice and he qualified 12th. Berry finished third at Phoenix. He will have a good chance to finish in the top-five again today.

SHELDON CREED $9,000: “Drive it like you stole it!” That is what is should say above the door of Creed’s car because that is what he does in every race. Creed is going to be fast today. He posted the 11th-fastest speed in practice and qualified 13th. Creed will be a good pick if he can stay out of trouble.

LANDON CASSILL $8,800: The good news about Cassill is that we know exactly what we are going to get from him. Cassill is not going to lead any laps or score many fastest laps. He will finish in the top-10 though. Cassill starts 36th and a top-10 finish will result in 50+ DK Points. His ownership should be low, so he is worth a spot in a few lineups.

SAM MAYER $8,700: Mayer has had a lot of speed this year but he has had a hard time finishing races. He had top-10 green flag speed at Auto Club, Las Vegas and Phoenix but he finished all three races outside the top-10. Mayer will have some momentum after his fifth-place finish last week. Hopefully that momentum will give this young driver the confidence to finish the race in the top-10. I will play Mayer in some Tournament contest lineups today.

AUSTIN HILL $8,400: Hill has been more consistent than his teammate at Richard Childress Racing (Sheldon Creed). He enters the race with a lot of momentum. Hill finished the last two races in second-place (Atlanta and COTA). Those two tracks are completely different from Richmond, but I do believe in momentum. Hill posted the second-fastest speed in practice and the 10-lap average speed chart. Hill qualified fourth for the race. He is risky since he starts to close to the front, but Hill is worth a spot in a few Tournament contest lineups.

JEB BURTON $7,500: DraftKings continues to price Burton like he is in a slow car. Yes, he drives for Our Motorsports, but Burton has been able to have some success this year in the No. 27 car. He started 16th and finished 12th at Phoenix. Burton crashed his car in qualifying so now he will start in the back today and should score a lot of place differential points at his home track.

ALEX LABBE $7,000: Labbe is known as a road course ace but he has had some value on the ovals this year too. Labbe started 17th and finished 15th at Las Vegas (30 DK Points) and he started 23rd and finished 19th at Phoenix (28 DK Points). Labbe is not going to win you your contest, but he will not lose it for you either.

RYAN SIEG $6,700: Sieg is having a good season in 2022. He finished 10th at Daytona, 11th at Phoenix, 10th at Atlanta and 11th last week at COTA. Sieg is just too cheap on DraftKings to ignore today. Sieg starts eighth so he does not offer a lot of upside, but he should be able to score 30 DK Points today.

MASSON MASSEY $6,000: Massey has been my “punt play” in many races this year and he has not disappointed me yet. Massey is averaging 9.5 place differential points per race this year. That is the best in the series. His ownership is always low too. I will roll the dice with Massey from the 25th starting spot today. 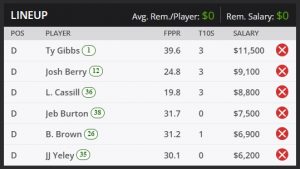 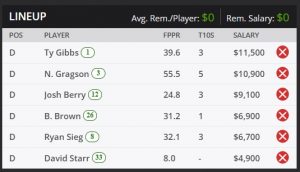