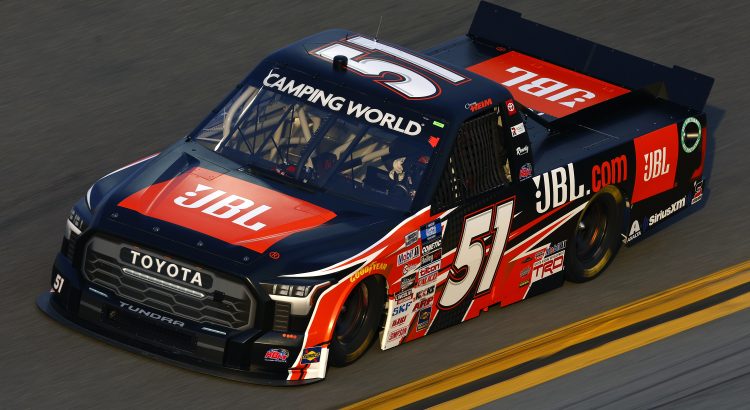 The NASCAR Camping World Truck Series will kick off a double-header of racing at COTA Saturday. The XPEL 225 can be seen Saturday at 1 p.m. ET on FS1. The Xfinity Series race will follow at 4:30 p.m. ET. (Same channel) So get your snacks ready. It is going to be a long, fun day of road course racing in Texas.

The Truck Series had their normal practice session Friday. The truckers were all allowed to practice for 20 minutes and then broken up into groups for qualifying. That is not a lot of time on a 3.4-mile road course. It certainly is not enough time to make any long runs. Traffic was also an issue in practice since each team spent the 20 minutes on the track and not in the garage. Some drivers were not able to show how fast they really are because slower trucks were in their way. I doubt we will learn a lot from practice, but here are the speeds to give you an idea of what each team has for the race at COTA… 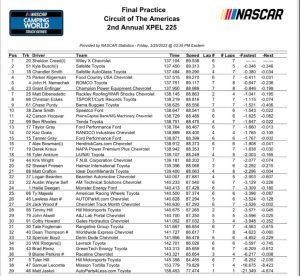 Sheldon Creed was fastest in practice and he won the pole. The truck has blazing speed but Creed said the team needs to change a pump so he will start from the back and be scored from the No. 1 spot. He has the most risk in the field this week, so I will not be playing Creed much Saturday.

Tanner Gray slide off the track and had a tire go down. He said the truck was rubbing on the fender and that caused the flat tire. They fixed it and it should not be an issue, but something to know if you are interested in Gray who is on a hot streak right now.

Matt DiBenedetto was fast in practice but he broke the track-bar on his final run. He did not get to qualify so now he will start in the back and should score a lot of place differential points. There is some risk though that the issue could happen again in the race.

Stewart Friesen thought he lost a cylinder but he said they only had an injector that came loose. They fixed it and Friesen said the truck is now fine.

Hailie Deegan said her truck had some serious “wheel-hop” that made the truck tough to drive. They worked to fix the issue but she said, “It is still hoping.” Deegan had Chase Briscoe helping her with the truck and teaching he how to correct her mistakes.

Matt Crafton said the front of his truck would not turn. He said, “The fronts slide through the corner, instead of turning.”

Ben Rhodes posted the 12th-fastest lap and said, “I was only able to run it about 70% because I could not get a clean track to make a fast run. This truck is really fast though.”

Will the Truck Series race Saturday be a repeat of the Xfinity Series race at COTA last year? I hope not, but there is a good chance it will happen…. Kyle Busch ran the No. 54 car in the Xfinity Series race at COTA last year and he smoked the field. Busch led 35 of the 42 laps and scored 24 fastest laps (19.55 dominator points). Typically, we do not have to pay up for dominators on road course but when you give the best driver, the best truck… there is a good chance he will lead 85% of the laps and score 58% of the fastest laps. I will be building 70% of my lineups around Rowdy and fading him in the remaining 30%. 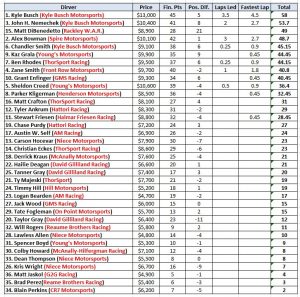 KYLE BUSCH $13,000 is expensive Saturday but he is worth it. Busch destroyed the field at COTA last year in the Xfinity Series. He scored almost three-times as many DK Points as any driver in the field. Now he will compete against less talented drivers. I will have Busch in most of my lineups Saturday.

JOHN H. NEMECHEK $10,400 was good but not great on the road last year. He finished third at the Daytona Road Course, 12th at COTA and second at Watkins Glen. He only led 16 laps and only scored 12 fastest laps. His price is high, but you can trust the Kyle Busch Motorsports will have speed. I will pair Rowdy with Nemechek in a few lineups Saturday.

ALEX BOWMAN $10,100 will be behind the wheel of the No. 7 truck for Spire Motorsports. Don’t be fooled, this truck has full support from Hendrick Motorsports so it will have speed. Bowman is not the road course driver Kyle Busch is, but he is getting a lot better and he has more talent than most of the field. I will pair Busch with Bowman in a lot of lineups Saturday.

KAZ GRALA $9,900 is a road course specialist. He finished sixth in the Cup Series race at the Daytona Road Course last year so you know he is good. Grala started second and finished second at COTA in the Truck Series race last year. He has the talent to finish in the top-five again Saturday so I will have Grala in some of my lineups.

ZANE SMITH $9,700 is not the first driver that comes to mind when people think of road course racing but I like him for this race. Smith will be driving the truck that Todd Gilliland drove to Victory Lane at COTA last year. He will also be starting from the pole since Sheldon Creed will go to the back. Smith finished eighth in this race last year. He should finish in the top-10 Saturday.

BEN RHODES $9,500 is no stranger to Victory Lane at the road courses. Rhodes won the race at the Daytona Road Course last year. He also led laps in two of the three road course races last year. I like some of the other drivers priced around Rhodes a bit more Saturday (Alex Bowman and Kaz Grala)but I will have a few shares this week.

CHANDLER SMITH $9,100 is so confident that he will win this week that he made a bet with Kyle Busch. He bet the boss man that he would finish higher than Rowdy in the race. The loser has to wash the trucks in the shop on Monday. Smith was not great on the road courses last year but he said he has been practicing on the simulator. Smith has been running so well this year that I cannot fade him completely. I will have a few shares, but I think Smith will be washing the trucks Monday.

STEWART FRIESEN $8,800 has been good but not great on the road courses this year. I will not have a lot of shares of Friesen because I plan to play a lot of “Stars and Scrubs” lineups with Kyle Busch, but I will have Friesen in the lineups where I fade Rowdy and build a “balanced lineup.”

PARKER KLIGERMAN $8,500 is a trucker I really like Saturday. Kligerman will be behind the wheel of the No. 75 truck for Henderson Motorsports. Kligerman drove this truck in all three road course races last year. He finished eighth at the Daytona Road Course, 13th at COTA and fifth at Watkins Glen. Kligerman will also be competing in the Xfinity Series race and the extra track time in Xfinity Series practice would help him find his rhythm at the track. I will have Klingerman in a lot of lineups Saturday.

TYLER ANKRUM $8,300 is one of the more underrated drivers on the road courses. He won the pole, led four laps and finished third at COTA last year. He also started 10th and finished seventh at Watkins Glen. I like the price for Ankrum this week so I will have a few shares of the No. 16 truck.

MATT CRAFTON $8,100 is a good driver to have in your DK lineup Saturday. His price is reasonable and his results on the road courses are decent. Crafton has a 10th-place average finishing position in his last 10 starts on the road courses. He doesn’t lead many laps but his ceiling is in the top-five and his floor is about 15th. Not too bad for $8,100.

HAILIE DEEGAN $6,600 had a good race at COTA last year. Can she do it again? Deegan started 28th and finished 14th. She scored 43 DK Points in the race. Deegan also finished 19th at Watkins Glen, so maybe her good run at COTA was not a fluke. I will take a few chances with Deegan for $6,600.

TAYLOR GRAY $6,400 has a fast truck but can he keep it up front. Andy Lally said during practice, “That 17 truck looks like it handles well. Gray is going to be a factor Saturday.” Gray posted the 13th fastest speed and qualified ninth. He is worth a spot in some Tournament Contest lineups.

TIMMY HILL $5,200 never gets any respect from DK. He is averaging 36.1 DK Points per race this season and he is still priced in the low-$5K range. Hill competed in all three road course races last year. He had a 30.7 average starting position and a 19th-place average finishing position. He averaged the 13th most DK Points in the races. Not bad for $5,200. I will take a chance with Hill Saturday. 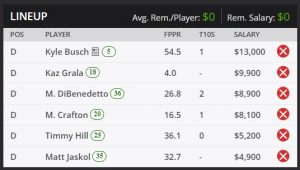 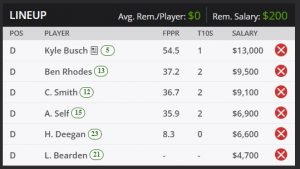