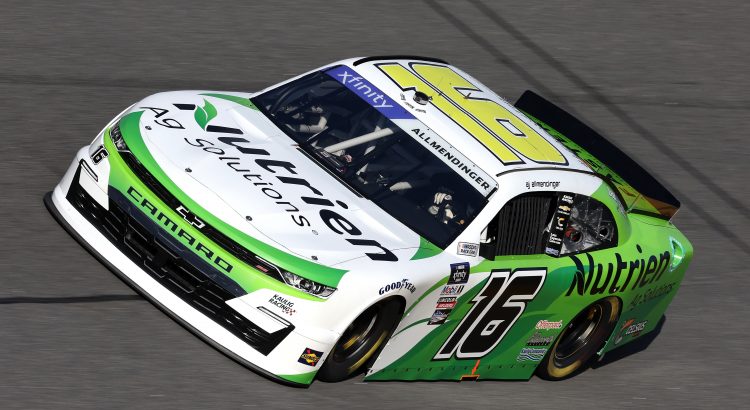 The field for this race is stacked. Not only do we have the Xfinity Series regulars, who are pretty good at road course racing, we also have Ross Chastain, Cole Custer, Bubba Wallace and a list of “road course ringers”. Some of these drivers include: Miguel Paludo, Preston Pardus, Will Rogers, Scott Hackert and Sage Karam. There will be plenty of options for our DFS lineups Saturday.

The Xfinity Series had their normal practice session Friday. The teams were all allowed to practice for 20 minutes and then the field was broken down into two groups for qualifying. That is not a lot of time on a 3.4-mile road course. It certainly is not enough time to make any long runs. Traffic was also an issue in practice since each team spent the 20 minutes on the track and not in the garage. Some drivers were not able to show how fast they really are because slower cars were in their way. I doubt we will learn a lot from practice, but here are the speeds to give you an idea of what each team has for the race at COTA… 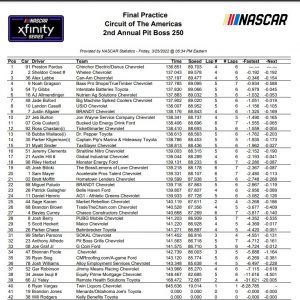 We do not have a lot of data to use to predict the dominator points for Saturday’s race. Kyle Busch was in the No. 54 car for Joe Gibbs Racing at COTA last year and he smoked the field. Busch led 35 of the 42 laps and scored 24 fastest laps (19.55 dominator points). That is what happens when you take the best driver and give him the best car in the field. Busch is now “retired” from the Xfinity Series so I expect we will have more dominators and a better race.

DraftKings screwed up the prices this week and I plan to take advantage of it. There are some really good drivers priced under $7K. That will allow us to fit three of the high priced drivers into our lineups with three of these value picks. I will build my lineups around AJ Allmendinger since he is the class of the field. I will pair him with Ty Gibbs, Ross Chastain, Noah Gragson, Justin Allgaier, Cole Custer or Brandon Jones. Then I will chose between the values drivers which consists of Brett Moffitt, Jeremy Clements, Alex Labbe, Brandon Brown, Jeb Burton and Ryan Sieg. This is a great race to use the “Stars and Scrubs” strategy for lineup construction. 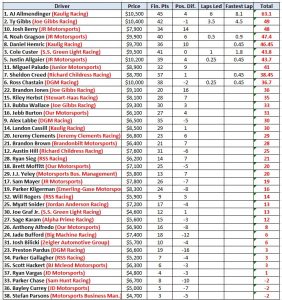 AJ ALLMENDINGER $10,500 is clearly the class of the field Sunday. Allmendinger finished first or second in five of the seven road course races last year. He also led laps in every race. He won two of the races and finished second to Kyle Busch (COTA) and Austin Cindric (Indy Road Course). Those two drivers are not in the field Saturday, so Allmendinger should have a clear path to be the top dominator in the race.

TY GIBBS $10,400 is off to a great start in his rookie season in the Xfinity Series. He already has two wins (Las Vegas and Atlanta) and Gibbs has a 6.4 average finishing position. Now we get to see what he can do on a road course. Gibbs won the Xfinity Series races at the Daytona Road Course and at Watkins Glen last year. He will be driving the car that Kyle Busch led 35 of the 42 laps and scored 19 fastest laps on his way to Victory Lane at COTA last year. Gibbs is the best pivot from Allmendinger Saturday but I will be stacking these two drivers in some of my lineups for this race.

ROSS CHASTAIN $10,000 will be behind the wheel of the No. 92 car for DGM Racing. Chastain drove this car at COTA last year. He qualified second and had engine issues and finished 30th. The car has been driven by Kyle Weatherman this year. Weatherman finished eighth last week at Atlanta. Chastain should have a good chance for a top-10 finish “if” the car and engine can stay in one piece.

DANIEL HEMRIC $9,700 should not be overlooked this week. Justin Haley finished in the top-10 in all seven road course races in this car last year. You would think Henric would be able to do the same. The Kaulig Racing cars do not have the speed that the Junior Motorsports and Joe Gibbs Racing cars have on the intermediate tracks, but they are more than capable of finishing up front on the road courses.

COLE CUSTER $9,500 competed in the Xfinity Series race at COTA last year. He started seventh and finished third. He scored the third most DK Points in the race (Behind Kyle Busch and AJ Allmendinger). Custer will be back in the No. 7 car for SS Green Light Racing. Don’t be fooled… This is a Stewart-Haas Racing car. Custer should have a great chance to finish in the top-five Saturday.

BRANDON JONES $9,100 did not even turn a lap in practice before his car stalled on the track. Joe Gibbs Racing reported it was a “mechanical issue.” They tried to get it fixed but were unable to get the car ready for qualifying. Jones will start from the back so he is a safe pick for your Cash and Tournament Contest lineups. The team will not know if the car is ready for the race until it is on the track Saturday. But this is Joe Gibbs Racing. I am sure they will have Jones ready to race.

MIGUEL PALUDO $8,900 will be in the seat of the No. 88 car for Junior Motorsports. This will be a fifth car in the field for the team (there is no limit on the amount of cars a team can field in the Xfinity Series). Paludo drove the No. 8 car for Junior Motorsports last year at the Daytona Road Course, COTA and Mid-Ohio. He had mechanical issues at COTA and Mid-Ohio and finished seventh at Daytona. There is some risk in using Paludo but there is some upside too.

LANDON CASSILL $8,500 only averaged an 18th-place finish on the road courses last year. That was in a JD Motorsports car. Now he gets to see what he can do in a Kaulig Racing car. Jeb Burton averaged a 12th finishing position on the road course races last year in this car. Cassill should be able to run in the top-10 Saturday.

PARKER KLIGERMAN $8,300 will be behind the wheel of the No. 35 car for Emerling Gase Motorsports. Kligerman has had a lot of success on the road courses in the Truck Series. I am not sure how that success will translate to the Xfinity Series, but I am will to find out. I will have a few shares of Kligerman Saturday.

RILEY HERBST $8,100 is about the same driver as Brandon Jones but at a cheaper price. He either finishes up front or has problems at the road courses. Herbst finished seventh at Road America and eighth at the Indy Road Course last year. He also finished 39th at the Daytona Road Course and 34th at the Charlotte Roval. He should be helped this week since he will have practice and Cole Custer to lean on for support. Herbst is still a high risk, high reward driver for your tournament contest lineups.

JOSH BERRY $7,900 is often thought of as a short-track specialist, but he is decent on the road courses too. Berry drove the No. 31 car for Jordan Anderson Racing at Mid-Ohio last year. He started 31st, finished eighth and scored the third-most DK Points in the race. So how do you think he can do in a Junior Motorsports Chevy? Berry is one of the most mispriced drivers on DK this week and I plan to take advantage of it.

JADE BUFORD $7,400 has a background in road course racing so he should be a decent pick Saturday. He started 18th and finished 15th at COTA last year. I doubt Bufford will finish in the top-10 but he does have a good chance for a top-15 finish. That is not bad for his price for this young driver.

JEREMY CLEMENTS $6,800 is always one of my go-to-drivers at the road courses. His price is usually cheap enough that I can pay up for the top drivers. He also has the upside to finish in the top-10 (Clements finished 10th at the Daytona Road Course last year) and his floor is about a 16th-place finish (not too bad). Clements is a cheap driver who will allow you to fit the higher-priced drivers into your lineup.

ALEX LABBE $6,500 is a good road course driver. What am I missing here? Why is Labbe priced at $6,500? He finished 11th at Mid-Ohio, 13th at the Indy Road Course and 14th at the Charlotte Roval last year. Labbe is a much better road course racer than at least 10 drivers priced above him. I will take the discount Saturday.

BRANDON BROWN $6,400 is not a road course specialist, but he is a lot better than his $6,400 price suggests. Brown finished eighth at the Daytona Road Course, sixth at Mid Ohio, 11th at Road America and 12th at Watkins Glen last year. Those stats scream, “PLAY ME!” at his current price. Brown has also been running well this year. I will take a chance with him in this race.

JEB BURTON $6,500 price is a joke this week. Yes, he is no longer driving the No. 10 car for Kaulig Racing but Our Motorsports is not that far behind on speed. Burton had a 12th-place average finishing position on the road courses last year. Brett Moffitt drove this car to a 12th-place finish at COTA in 2021. Burton will have a good chance to finish in the top-12 Saturday. His price is just too good to pass up. 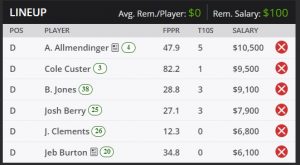 *The lineup should be good for Single-Entry Tournament Contests too 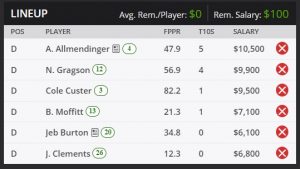