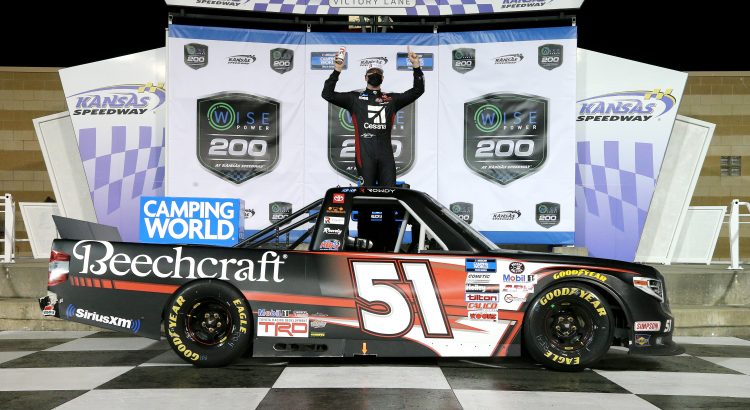 The NASCAR Camping World Truck Series will join the Cup Series at Kansas Speedway this week. This track always puts on a good show with the truckers. I will never forget going to the Truck Series race at Kansas and Kyle Busch wrecked Austin Dillon. After the race, Richard Childress pounded some knots on Rowdy’s head. It doesn’t get any better than that…LOL. The field is mostly full-time truckers this week, so it should be a pretty competitive race. The Heart of America 200 can be seen Saturday at 8 p.m. ET on FS1.

Here are the practice speeds from Saturday’s practice at Kansas… 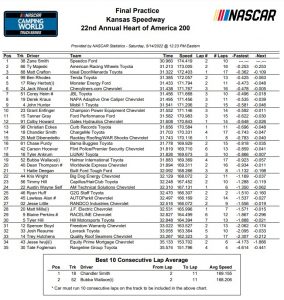 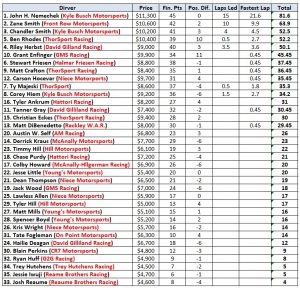 ZANE SMITH $10,600: The biggest threat to the Kyle Busch Motorsports trucks is probably Smith. He has been really good on the 1.5-mile tracks this year. Smith started 6th, led 15 laps and finished 2nd at Las Vegas earlier this year. After the race his truck was disqualified for not having enough lug nuts. His average finishing position in his four races at Kansas is 8th. He is also averaging 26 laps led per race.

BEN RHODES $10,400: Rhodes has either been really good or just OK at the 1.5-mile intermediates tracks over the last year. He finished 3 of the 7 races in the top-three ad he finished 4 races 10th or worse. Rhodes had a lot of speed at Las Vegas but crashed out of the race. He has speed again this week and if he avoids the wrecks he will finish in the top-five.

CHANDLER SMITH $10,200: The most similar track to Kansas that the Truck Series has competed at this year is Las Vegas Motor Speedway. Smith started 3rd, led 32 laps and went to Victory Lane in Sin City. I would not be surprised if he won again Saturday night. The Kyle Busch Motorsports are always fast at Kansas.

COREY HEIM $9,200: Heim has competed in one race on a 1.5-mile track and he won it. Heim started 19th, led 22 laps and went to Victory Lane earlier this season at Atlanta. I know Atlanta is a completely different type of track as Kansas, but it shows he can run up front. Heim has been good when he has been in the No. 51 truck for Kyle Busch Motorsports. He will have some extra track time since he is competing in the Arca Series race Saturday.

RILEY HERBST $9,000: Herbst will drop down from the Xfinity Series to drive the No. 17 truck for DGR. Ryan Preece drove this truck at Las Vegas this year. Preece started 5th and finished 4th. This truck has had speed in all of the races. Herbst should be able to finish in the top-10 Saturday night.

STEWART FRIESEN $8,800: Friesen has been hit or miss at Kansas. He has a few top-10 finishes and a few finishes outside the top-15. He was really good at Las Vegas when he finished third. Friesen missed his flight to Kansas City so he was not at the track for practice or qualifying. Bubba Wallace practice and qualified and said the truck had a lot of speed. Friesen has a lot of risk since he will start in the back because of the “driver change rule” but he is worth a spot in a few Tournament Contests since his ownership should be low.

MATT CRAFTON $8,400: Crafton will be the best pick in the field if experience means anything at Kansas Speedway. Saturday’s race will be the 24th for Crafton in the Heartland. He was involved in a crash last year and finished 24th but he finished 8th, 1st, 4th, 6th and 6th in his previous five races. Crafton should be a safe pick for a top-10 finish Saturday night.

DEREK KRAUS $7,700: Kraus is not going to win you your DraftKings contests but he will not lose it for you either. Kraus has a 15.8 average starting position and a 16.8 average finishing position on the 1.5-mile tracks over the last year. He will likely finish right inside the top-15 Saturday night.

TANNER GRAY $7,400: Gray is one of my favorite value plays Saturday night. His 14.5 average finishing position on the 1.5-mile tracks over the last year is better than Matt Crafton, Carson Hocevar, Matt DiBenedetto and Tyler Ankrum. Gray started 8th and finished 5th at Las Vegas earlier this year. He will be one of the best picks in the field if he can repeat that performance.

AUSTIN W. SELF $6,800: Of course Self in listed in my Core Drivers. He is always one of the best values in DFS. He had a decent race at Kansas last year. AWS started 16th and finished 16th. He scored 27.9 DK Points in the race. AWS starts 23rd Saturday night and should be able to finish near the 15th position.

TIMMY HILL $6,100: Hill is another one of my go-to-drivers in DFS contests. He typically scores 5-10 place differential points in every race. Hill started 25th and finished 22nd at Kansas last year. Hill starts 26th Saturday night and his average finishing position at Kansas is 20th. He should move up 5 spots in the race this week.

SPENCER BOYD $5,200: Boyd should be a good “punt play” tonight. He is averaging 10 place differential points in his last three races on the 1.5-mile tracks. Boyd probably will not finish inside the top-20 but he starts 30th Saturday night and should be able to move up 6-8 positions in the race. 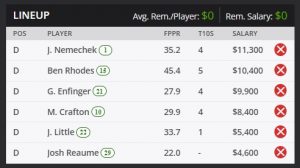 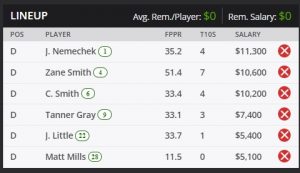 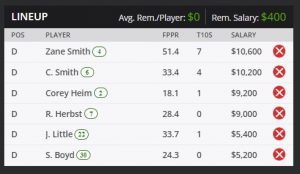